Why do accelerating electrons emit radiation?

I know how you can emit light with an alternating current, running back and forth, creating an electric field in addition to the magnetic field. But why does an electron emit light when it gets accelerated, there is no positive end to create an electric field. Further more, as opposed to talking about currents, talking about acceleration seems to be a different beast entirely.

The field of the accelerated charge cannot change instantaneously. From "Gravitation" by Misner, Wheeler, and Thorne. 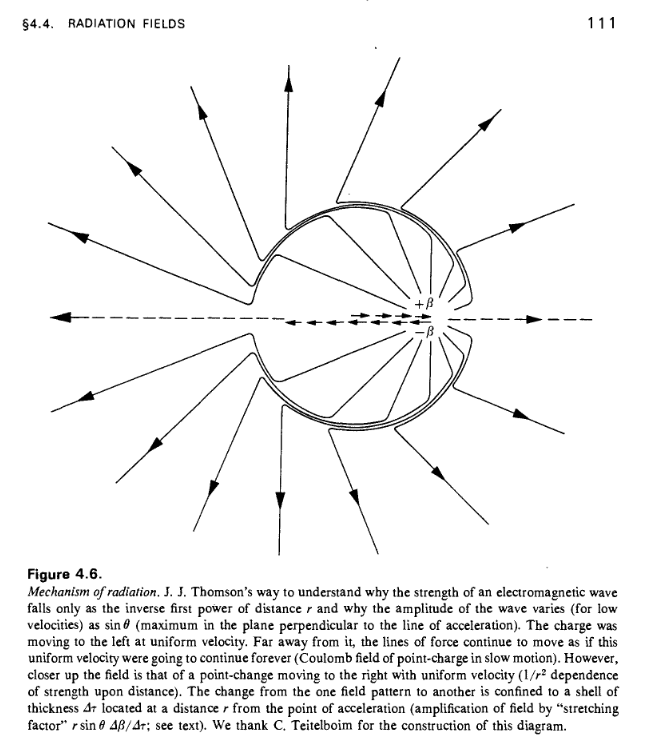 So it does have an electric field-but why does accelerating a field(which is in the answer below) cause light to be made? Or rather, why wouldn't a constant velocity just do it?

Try this applet and see (1) how the field looks when the charge is uniformly moving and (2) how a disturbance propagates in the field of an accelerated charge. I find the "User Controlled" option useful.

First, to answer to the question implied in the comment to the question, a constant velocity has no physical meaning. The laws of physics are invariant under Lorentz transformations, including boosts of finite magnitude. You could always boost to the frame moving alongside the electron. In this frame it is at rest. Note however, that such boosts entangle electric and magnetic fields (see Wikipedia).

Now to answer the actual question: Acceleration is a change in the state of motion of the electron. This means, by accelerating the electron, you change its momentum $\vec p$ and its kinetic energy $E = \frac{\vec p^2}{2m}$.

Momentum and energy are conserved quantities, though, and you need to put the energy your electron loses somehwere (or get the energy gained somewhere). Similarly, if your electron's momentum gets changed towards the right, there must be some momentum going to the left somewhere, as the total momentum is conserved.

In matter, electromagnetic fields are everywhere. You have a confusing fuzz of the fields of the nuclei and the other electrons, everything moving about. But if the electron is in a vacuum - either since we are interested in fundamental issues or simply because we put it there - it has no other charged object to which it can give its energy and momentum via electromagnetic interaction (this would be interaction through a virutal photon.).

But an electron can only do electromagnetism (ignoring its gravitational and weak interactions, since those are waaaaay to weak to matter). If we now make the electron's momentum change by exposing it to an electric field in the vacuum, it can only give off its energy and momentum to a real photon - which is light.

0
Why will an accelerated electron emit a photon?
6
What carries electric field through space?
0
How is light produced?
3
Why doesn't a charge in gravitational field radiate (or free fall)?
1
The Observance of Electromagnetic Phenomena
1
Why does an accelerated charged particle emit electromagnetic waves?
2
Electrons and Magnetism

2
Electrons and Magnetism
24
How is the energy loss by an accelerating charge expressed in the equations of motion?
2
Free (unbound, so not bound to a nucleus) accelerated electron cannot emit/absorb a real photon?
4
Does Electromagnetic wave propagation really use $E$ to create $B$
1
Classical vs. quantum radiation
4
How exactly does an electron falling back to its original state from an excited state produce electromagnetic waves?
1
Manner of energy exchange between an accelerating charge and the fields it produce
0
Easy explanation why electron emits photon when accelerated in $E$-field, but not in $B$-field?