Does the Magnitude of the Drag Coefficient on a Rectangular Prism vary with Rotation?

I have a question about the drag coefficient in the drag equation.

Let's say I have a rectangular prism oriented such that, looking down on it, the long side is parallel to the y-axis. Moving forward in a fluid at high velocity (Re > 100000), based on what I've read, the front surface area would experience drag with a coefficient of ~1.28. The drag coefficient on the side is equivalent because they are both rectangles, however, it would experience no drag because there is no relative velocity in that direction. Now assume the rectangle rotates, but it is still moving in the direction of the same face, as if it were a boat for example. See the image below: 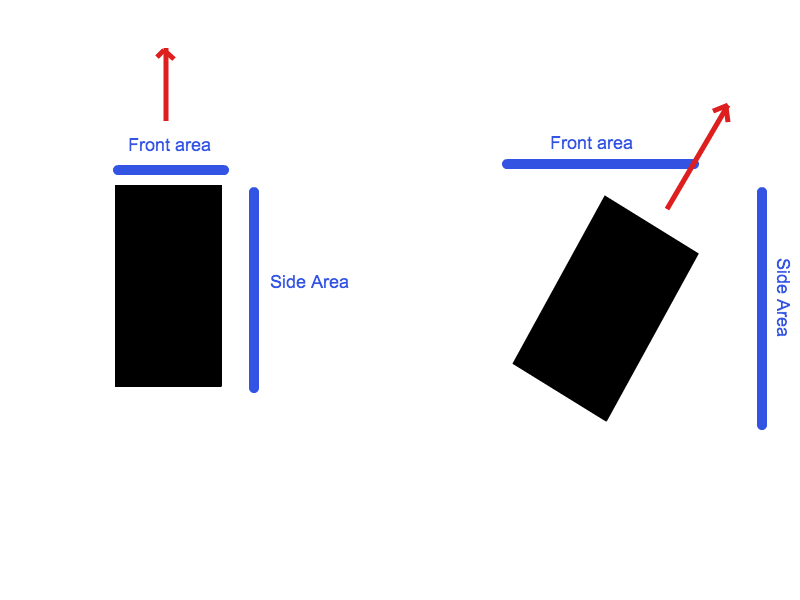 I'm thinking of it as a vector, so in the first image it moves vertically some velocity, and horizontally at no velocity. In the second, it moves both vertically and horizontally. The magnitude of the velocities should each be the same; let's say each is moving at the object's terminal velocity.

The drag coefficient MUST change (if expressed as a vector like I'm saying) because if it didn't, the object would never be able to reach it's terminal velocity moving at an angle like in the second picture. Obviously the area increases, so the if the drag coefficient was constant, the drag would increase, so the velocity would decrease. So is there a known drag coefficient for a flat plate at an angle of attack $\theta$? Any help in understanding what's happening here would be greatly appreciated!

Based on your sketch, the block is always moving along it's long axis, in other words, the velocity is always along the direction of your red vector. This means in the picture on the left, there is only vertical velocity while in the picture on the right, there is both vertical and horizontal velocity. This is what you have described, I am only summarizing to make sure the rest of my answer makes sense and is consistent with this understanding.

Consider the area vector of each face to be the area of the face times the surface normal, ie.:

In your example on the left, the area normal is in the $\hat{j}$ or Y-normal direction and so is the velocity. This gives you the drag coefficient you cite.

You are correct to say that the area increases in the $\hat{j}$ direction -- you now have both a portion of the short side and a portion of the long side exposed to the Y-direction. However, the block is still moving normal to the short side along the red vector, which means the area vector for the long sides are perpendicular to the red vector and that area does not contribute to the so called "frontal area" of the block.

Not the answer you're looking for? Browse other questions tagged fluid-dynamics rotational-dynamics drag or ask your own question.

0
Does the time to reach the highest point $P$ equal the time to reach the ground from $P$ in a trajectory, taking drag into account?
1
Drag Force per point in the body
12
Will a bullet dropped and a bullet fired from a gun horizontally REALLY hit the ground at the same time when air drag is taken into account?
1
How to calculate the actual drag force on a wing?
0
Modelling an Airplane Question
1
How to calculate drag caused by string?
1
Flight time of spherical bullet fired horizontally versus dropped vertically / effect of crosswind on spherical car
0
Does weight affect the drag force on a falling parachute?
0
How does an increase in the drag force impact the drag coefficient?