On the properties of $\Delta$ baryons

Since the baryons are made from three quarks, we have a total of $8$ possible combinations: 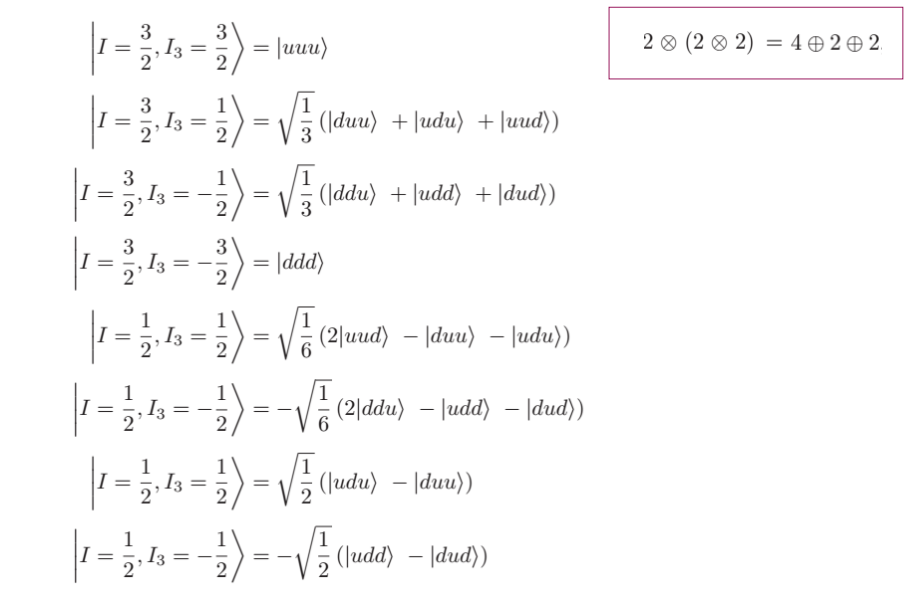 On the other hand I've found other representation of these baryons, for example in terms of the isospin. Let's consider $\Delta^+$

How can these two representations be equivalent?

Yes, they are equivalent, once you appreciate what is implied in the respective depictions. They both have suppressed color indices, which completely antisymmetrize the three fermion quarks, which are therefore also completely antisymmetrized by that, netting a total complete symmetry among them; the order indicates spacial wf degrees of freedom, symmetric here, and the first omits them, but not the second. (Not to mention spin, which is also omitted and symmetrized.) So the first one mumbles: "symmetrize by the S-wave space wf symmetry, of course!".

So the rightmost representation is redundant, in this case if you are looking at the Δs in isolation; but handy in relating the three states to other baryons with mixed symmetry, when you wish to take complete accounting of all states, all mutually orthogonal, and describe them all collectively. Observe the isodoublets, with mixed symmetry, are orthogonal to the isoquartets you are looking at, for the same $I_3=\pm 1/2$! Further, since their symmetry is not as simple, being mixed (both spin and isospin-wise, behold), the proton, by contrast, cannot be described in as simple abbreviated manner!

Good textbooks (Lichtenberg; Fayazuddin and Riyazuddin, Ch 6; ...) go through this in excruciating detail.

It's a shorthand. The state $\newcommand{\ket}[1]{\left|{#1}\right>} \ket{uud}$ isn't an eigenstate of isospin, so in low-mass strongly-interacting systems where isospin is a good symmetry, $\ket{uud}$ isn't a physical observable. But for an encyclopedia article, it might be convenient to say "the delta-plus is made of two ups and a down" without getting into symmetrization.

The "order" of the quarks, $\ket{uud}$ versus $\ket{udu}$ versus $\ket{duu}$, is not an observable, so your representation must be blind to it. The observables are the total isospin, the total spin, the charge (a.k.a. the isospin projection $I_3$), and the parity.

6
What maintains quark spin alignments in baryons?
8
Quark composition of the neutral pion
0
Ratio of partial widths for $\pi^- p \rightarrow \pi^0 n$ reaction
8
Why do we antisymmetrize the baryon's wavefunction but not the meson's?
0
Mass of mesons and baryons
1
Why is the proton (uud) lighter than the $Δ^0$ (uud) baryon?
0
On $\Delta^{+}$ particle decay
1
On the quark composition of baryons