A unusual derivation of thomas precession

where s represent the spin vector and $d\phi$ the angle between I and C. Now the point it's that I can't understand how $d\phi$ is obtained; the demostration continues with:

at time $dt$ the old rest frame ($t = 0$) is oriented at an angle $-d\alpha$ relative to the new velocity $\vec{v}_{0} + d\vec{v}$. Second in the moving intertial frame, both these directions are rotating (same as the ‘new’ velocity) γ times faster than in the laboratory frame. Hence \begin{equation} d\phi = \gamma d\alpha - d\alpha = (\gamma - 1)d\alpha \end{equation}

This passage leads to the correct form of the thomas precession, but I can't understand how can we subtract an angle relative to the laboratory ($d\alpha$) with an angle measured in the intertial frame I. And why this is the correct angle to put in the equation above. An image found in the book follows: 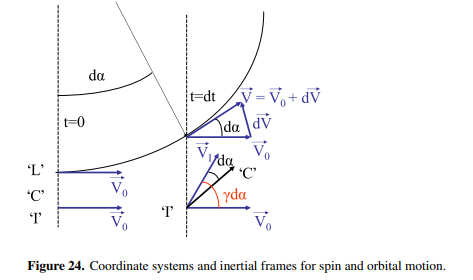 Browse other questions tagged special-relativity quantum-spin precession or ask your own question.

5
Criticism of the Thomas precession literature
11
What's wrong with this application of Thomas Precession to circular motion velocity measurements?
1
Confusion with Thomas precession
0
What is an explanation of the relavistic transformation of the Gaussian beam intensity?
0
Why covariant derivative is partial derivative in SR?
0
Rotational motion and special relativity