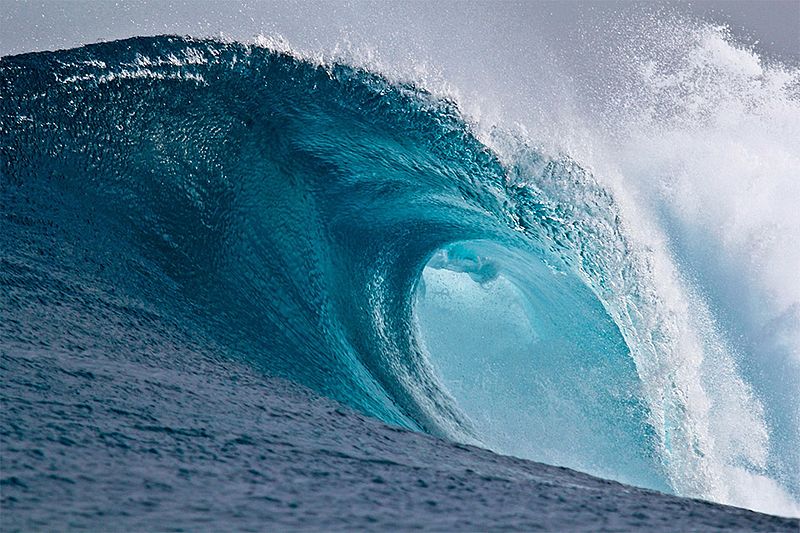 They cannot "curl" because the pressure cannot become multivalued. Because of non-linear effects they can, and do, steepen. But instead of breaking, they form shockwaves in which there is very sharp jump in the pressure. An example of the steepening effect can be found in wikipedia under burgers equation

In fact, water molecules follow a circular path (orbits) in water waves. When ocean waters reach shallower parts, the “orbitals” in the upper part of the wave are moving faster than those lower, and so the wave crest moves forward faster and ahead of the rest of the wave, creating the “tube” effect.

This is different to sound waves in air, in which case there exist only longitudinal oscillations in general.

So the "curl break" phenomena is not something that will occur for sound waves due to the fact that (in air) oscillations occur parallel to the direction of propagation.

You can imagine "curl break" to occur when a wave oscillates both up-and-down and in the direction of propagation like in water waves, but not for a wave that is purely longitudinal, as in sound waves (in air).

Perhaps the difference for unconfined waves in gases is that sound waves are spherical whereas those in seas are close to linear.

First, as correctly observed, waterwaves and soundwaves are both mechanical waves. The closest analogue to waterwaves are surface acoustic (sound) waves.

Sound waves in a solid may have both a transverse and a longitudinal component. For example, surface acoustic waves and Rayleigh waves have transverse components propagating on the surface of a solid. However, breaking waves ("curl brake") occur only in surface waves in fluids, and not in a solid. This is because, when the shear strain is large enough, the solid would just break down into pieces, instead of realizing a breaking wave.

Sound waves in air may have shear transverse waves (even though they are kinda exotic). I don't see any physical reason why these shear waves could not break. However, I think breaking waves of these kind have never been observer. This looks like an open research question.

To cite the paper above:

The dramatic process of wave breaking cannot be observed in solids with SAWs, since solids usually break under strain as soon as a certain degree of bond extension (typically 10–20%) has been reached.

Honestly, I think that whether shear waves in air may have breaking waves is an open question.

3
How can sound waves propagate through air?
15
Why do we hear a higher pitched sound outside the water when we smash two stones in water?
6
Can transverse sound waves be polarized?
29
Why is the speed of oceanic waves not a constant like sound?
1
Why does sound travel faster in steel than in water?
3
Propagation of mechanical waves in vacuum
67
If water is incompressible, how can sound propagate underwater?
2
Moving charges emit electromagnetic radiation. So can sound waves in ionized air produce light?
3
How exactly do vortices generate sound and cause pressure fluctuations to produce sound waves?