From the experiments, I believe is natural to expect that the "exact solution" for Eq. 1 should have an "ending time" from where the solution becomes exactly zero forever, this given by the fact that the experimental pendulum does indeed stop moving in reality (so far I know there is no known exact solution for Eq. 1).(For a discussion about the asumption of the pendulum movement stopping in a finite time due pendulum dynamics you can see this question).

But from what I am understanding now from this other question I have made, I am realizing that since Eq. 1 is a Lipschitz ODE, it stands to only have a unique solution. So finite-duration solutions can't be sustained by these kinds of ODEs- even if an analytical solution is obtainable, at best the solutions will lead to functions that "vanish at infinity" instead of having a "true ending time". This is because a function that reaches zero and stays there can't be analytical for the whole real line. As an example, this is what happens with bump functions $\in C_c^\infty$ (I am probably wrong, but it looks like from the Picard-Lindelöf theorem, that its solutions are going to be analytic since the Picard's iterations build a Taylor Series - this is not a fact, but is what I am interpreting of the theorem, so if I am wrong please comment it).

I have found recently a paper Finite Time Differential Equations (V. T. Haimo - 1985) where scalar ODEs with finite-duration solutions are studied. There, the author set all the equations as having an "ending time" at $t=0$, and says: "One notices immediately that finite time differential equations cannot be Lipschitz at the origin. As all solutions reach zero in finite time, there is non-uniqueness of solutions through zero in backwards time. This, of course, violates the uniqueness condition for solutions of Lipschitz differential equations." Thus I believe now that to have models that achieve finite-duration solutions, one has to leave the "comfort zone" of Lipschitz ODEs and Uniqueness of solutions (which could be also quite problematic, as the only example I know is the Norton's Dome, which is kind of a fictitious system built over a singularity and indeed there is a lot of discussion related to its solution's definition).

But since these things, being interesting, so far are on-purpose-made and quite speculative, I have the following questions:

To be honest, I don´t fully understand what it is said on the paper, but I think that the examples on Wolfram-Alpha will speak for themselves.

PS: About the "arbitrarity" of the selection of the non-lipschitz component, the traditional pendulum model friction as proportional to the rate of change as is explained on Wikipedia as the Newtonian Law of Viscosity, but in the same section is explained that are other models, like the Power Law Model which has components actually similar with which I am using here. I hope that knowing how to model finite duration solution will lead to adapts these classic models to show solutions that indeed behaves as having an ending time $T < \infty$, which I believe is the case on everyday phenomena, as a example, the Euler's Disk toy that show its ending time when the sound stops - I have a related question here).

PS2: An interesting extension of this discussion was made in this other question, hope you can visit to see the details and comment.

PS3: I have improved the model of the drag force into this other question, if you are interested in this question, surely you are going to be checking also this another.

for this differential equation 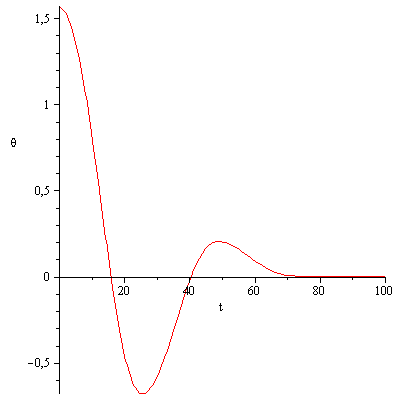 Not the answer you're looking for? Browse other questions tagged classical-mechanics friction drag differential-equations models or ask your own question.

0
Is it possible to explain the Ultraviolet Catastrophe as a manifestation of the Riemann-Lebesgue Lemma?
1
It is possible to have a drag force which is non-Lipschitz?
1
Is a reasonable assumption to consider that the contact point of the Euler's Disk (with stationary center of mass) trace this finite bounded spiral?

0
Trouble with equation of motion for a damped pendulum?
0
Particle sliding on a sphere with friction
1
Solution of the differential equation of a pendulum with a block (air resistance)
1
Is it possible to built a variational principle for this first-order system?
1
Is a reasonable assumption to consider that the contact point of the Euler's Disk (with stationary center of mass) trace this finite bounded spiral?
3
Are there physics models that accurately handle the assumption of having solutions that achieve finite ending times?
1
It is possible to have a drag force which is non-Lipschitz?
1
Confusion with time symmetry - pendulum example
1
Does it make sense to model the kinetic energy as $T=\frac{1}{2}mv\,|v|$ instead of $T=\frac{1}{2}mv^2$?