Floating a ping pong ball in the air just using a pen!

Caution: Apparently this problem is harder than it seems!

There is a well known phenomena, which I first learnt about when I was a 10 years old kid. You can levitate a ping pong(or whatever not-so-heavy) ball in the air by blowing throw an empty pen body or using a hair dryer. An interesting demonstration can be seen here. 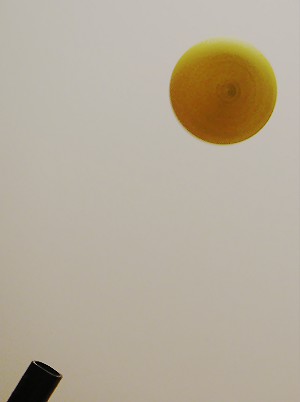 I am looking for a simple(and humbly realistic) model which is capable of answering the following questions quantitatively: Assume the ball's mass is $m$ and its radius is $r$, the diameter of our pen is $d$, the volumetric flow rate of air through the pen body is $Q$ and the gravitational constant is $g$

(Anecdotally, the "circulation" aerodynamicists use to calculate the lift per unit width is related to a certain integral of this quantity over an appropriate cross sectional area.)

This points radially inwards to some equilibrium point, at which the net forces acting on the ball cancel. In practice, the ball will hang slightly below this point due to gravity, Edit: see below.

When the ball is displaced from this position normally to the flow by some distance $z$, we can calculate the total restoring force acting on the ball by integrating $\vec{\nabla} P$ over the volume of the ball under two assumptions:

$1.$ the curvature and equilibrium position of the airflow is negligibly disturbed by moving the ball like this, and so independent of $z$

$2.$ the net volume of the displaced ball that's relevant to the integration (i.e. that contributes to an *un*balanced force) is approximately equal to $\pi R^2 z$, the cross sectional area of the ball times the displacement $z$

with these assumptions, the restoring force is

which we can immediately recognise as a harmonic oscillator

where $m$ is the ball's mass, and get for natural frequency

or for an easier-to-measure frequency of oscillation $\nu$ in terms of $Q$, estimating $v = Q/A$,

This assumption is a bit questionable as none of the air actually passes through this area, but this is the only finite area relevant to the problem. At worst, the true area that this depends on, probably the "average" area that the flow passes through in the plane that passes through the ball's equator, will be $A$ times some numerical constant.

It's important to note that this scales linearly with $Q$, so blowing twice as hard will result in oscillations that are twice as fast.

Using BebopButUnsteady's reasonable $Q$ of $6$ L/s, and the above $R$,

Which sounds fairly reasonable to me. But again, the linear dependence on $Q$ is important, and for weaker flows it will be proportionately slower.

And as a final note, my earliest assumption that the pressure gradient was constant over the surface means this formula doesn't distinguish between oscillations parallel the stream and oscillations normal to it.

In practice, it's known that the inward pressure gradient will be lower at the points of the ball that are "in line with" the stream than those that lie further outside since the streamlines curve in the opposite direction, so oscillations parallel to the stream will have a lower frequency than the normal/"lateral" ones in general.

PS: The final formulas here will probably only hold up to some experimental "fudge factor", which may be interpreted as the numerical constant that appears in that approximation of $v \approx Q/A$: if $v = f Q/A$, then $f$ is the fudge factor. But this is fluid mechanics, and fudge factors are inevitable.

If we assume that the ball's displacement due to gravity is less than one radius, then we can say that

given the above definitions of $R$ and $Q$, or

which is far less than $6$ L/s, but may still be in line with what those toys that sometimes come in Christmas crackers. The velocity looks somewhat more intuitively reasonable. If these are too low to sustain experimentally, the reason for this may be that the flow is too unsteady when maintained by human breath.

In some videos, the amplitude of oscillations when suspended in a hair-drier flow can apparently be appreciably larger than one radius, so the assumption about $z<R$ may be out by some factor of up to 5; however, assuming this would make the final results for theoretical minimum $v$ or $Q$ smaller by a factor of $\approx 0.44$, so it is still an informed guess for an upper bound.

Since the assumptions involved in deriving this force only strictly apply to displacements normal to the stream, this is the minimum flow to suspend the ball horizontally; answering the question about maximum suspension angle (there may not be one) would require a more detailed description of the pressure distribution around the ball, which may well be available in the literature for laminar flow around a sphere.

Let me give the naivest possible estimate, so that people have something to criticize. Assuming that the most of the jet interacts with the ball and is deflected at a substantial angle then the force on the ball is roughly the momentum flow through the pen. In your units this is $\rho_{air} Q^2/(\pi d^2)$. Saying the force to levitate a ball is $1\times 10^{-2} N$, your pen's cross section is of order 10 $mm^2$ squared, we get $Q$ of order $1 L/s$.

I'm a first year physics student, so my answer might not be satisfactory - but I hope it will give some insight to the problem.

1) from what I know we need to consider:

we need the drag force to be equal to or greater than the weight of the ball.

because not all air will contribute to lifting the ball, and because the flow of air is not steady, this Q is not the minimum but it should be somewhere near that. I'll try to experiment with this - in a month.

2) That will take some measurments: how much air do you blow in 3 seconds? what it's velocity (can be tested with a balloon, like the way you measure lung capacity)

4) Not sure, but I think that horizontal displacement will result in an overdamped "oscillation" - due to Bernoulli's effect.

Let me try to answer the first question. 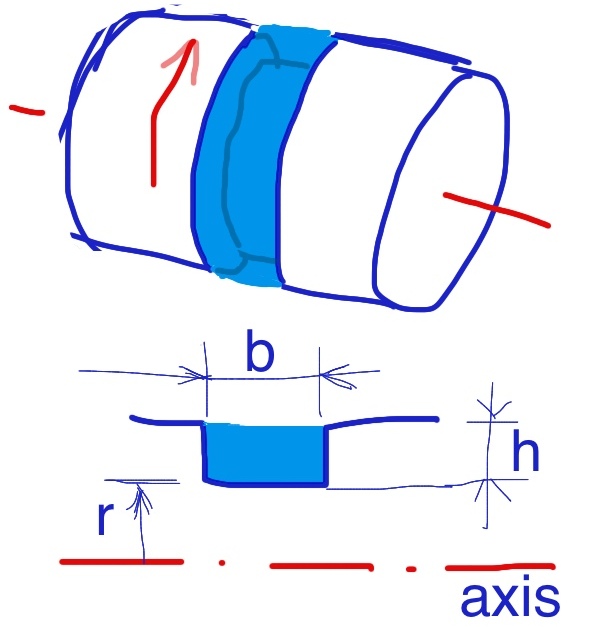 What is the water pressure at the bottom of the channel? How to calculate?

Thanks to Chet Miller for the following answers:

The pressure at the bottom of the channel decreases with the increase of $ω$. Lower than atmospheric pressure (Note that the air pressure in the spacecraft is one atmosphere). 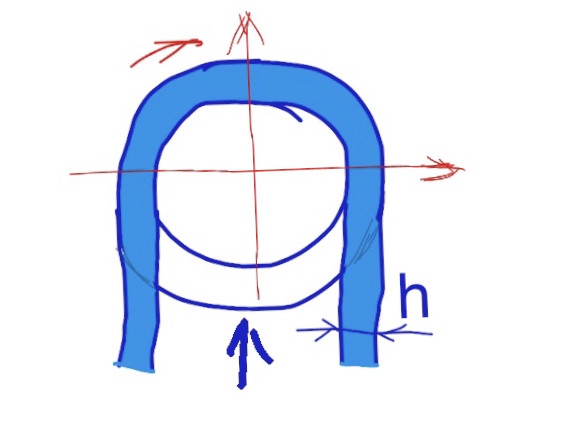 Assuming that the water flows only through the upper half of the channel, there will be an upward force acting on the cylinder because of the atmospheric pressure below the cylinder.

For simplification, suppose that the table tennis ball is a cylinder A, the radius of A is $r$, the weight of A is $w$, the cross section of pen body is rectangular, the width of rectangle is $b$, and the height is $h$. Suppose that the gas flows through the upper half circle of A with rectangular cross section. Then the upward force $F$ can be calculated by integral of formula.

Velocity $v$ can be calculated from $ω$ and $r$

Finally, it can be calculated that:

The lifting force of table tennis is not because of Bernoulli's theorem, but because of the centrifugal force of fluid curve movement.

Not the answer you're looking for? Browse other questions tagged fluid-dynamics everyday-life home-experiment models estimation or ask your own question.

1
Why did this table tennis ball rise to the sky?