Say we use a cell to give rise to a current in a circuit and then remove the cell such that the circuit doesn't break. It means that no potential difference exists between any two points in the circuit since a circuit wire with current is neutral. So will the circuit wire have a decreasing current after I remove the battery due to N1L and Galileos definition of inertia that a body's state of rest or motion cannot be changed without an external force acting on it? Also does this mean that a superconductor will have constant current flowing through it even after removing the voltage source since there is no resistance to slow it down?

Persistent currents
Persistent currents is the name given to the currents flowing without energy dissipation and therefore not requiring a voltage bias to be sustained. This is notably the currents in superconductors (already mentioned in the answer by @kruemi), but also currents in some mesoscopic devices, where the energy cannot be dissipated due to the size effects (e. g., lack of efficient coupling to phonon bath and/or restrictions on the electron momentum change). Note however that the currents on microscale generally do not follow the same rules as those for conventional circuits - in particular, the lumped-circuit description fails (see also my answer to Are voltages discrete when we zoom in enough?).

Diffusion currents, etc.
As less exotic options one could mention diffusion current, where the current is due to the difference in electron concentrations, rather than bias. This is however difficult to sustain for a long time, and it usually co-exist with conventional (drift) current, as, e.g., in pn junctions.

Thermoelectric and other phenomena
Onsager relations predict a number of phenomena where the current can arise from spatial variation in other thermodynamic parameters. The diffusion current above can be viewed as the result of a gradient in chemical potential. Another well-known case is thermoelectric phenomena. These are often expressed in terms of voltage at the terminals of a device, due to the accumulated charge, but in a bulk they are actually currents.

. . . . we use a cell to give rise to a current in a circuit and then remove the cell such that the circuit doesn't break.

. . . . does this mean that a superconductor will have constant current flowing through it even after removing the voltage source since there is no resistance to slow it down?

A way of exciting a superconducting magnet is explained below. 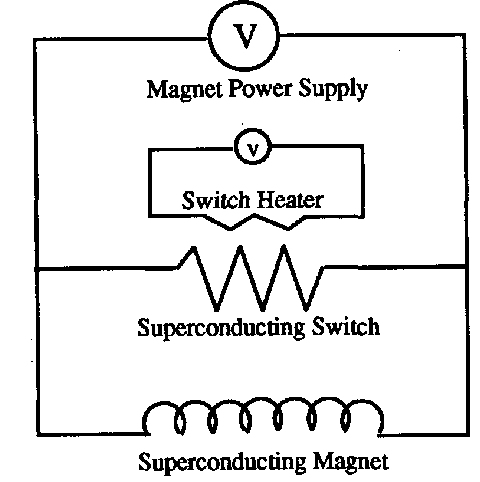 The heater is switched on and heats the superconducting switch to a temperature at which it is no longer a superconductor.

The heater is switched off and so the temperature of the superconducting switch drops until it becomes a superconductor.

For one: removing a voltage source without breaking the circuit is very hard. But in theory, that would be how it works. If you want to give it a try, use an inductor to pass current trough and then just short circuit your battery. The flow trough the inductor will continue for some time until the energy has dissipated because of internal resistances.

For some superconducting systems, that's exactly what they do (for example at CERN for magnets where a static field is needed (for example in some detectors). It's basically a "ring" of superconducting metal. Superconductors need to be below a certain temperature to be superconducting. So most of the ring is cooled down below that tripping point but one part is left "warm" (just above the required temperature). Then the current is introduced trough connections just before and after that "warm" piece. If the current has reached the desired value, it's held by the external source and the "warm" section is cooled down until it is superconducting too, thus closing the circuit. Over time the current is reduced (because changing the path of charged particles takes energy, so the energy from the magnet is slowly depleted) so the magnet has to be "restarted" again... The energies in those coils are enormous (We're talking GJ). So they have constructions to get rid of the energy within a second for example if for some reason part of the magnet is getting too warm. This means, for a short time, they send the current trough iron bars above ground and convert about 1GW of electrical energy into heat (that's equivalent to a small nuclear reactor). In other magnets, they have heaters to heat the whole magnet so the energy is dissipated over the whole length of the magnet in case of a quench event.

Not sure about Galileo here and superconductors, I will answer the otherwise realistic and simple question. As others pointed out there is always a capacity in a real circuit, even parasitic, so the action of disconnecting the cell source (however fast and without leaking currents you might be able to do that in reality) means that the capacity will act as a source and there will be a transitory current AND difference of potential.

To add to the other answers, bound (or magnetization) currents in permanent magnets are an example of currents that do not dissipate, or at least dissipate very slowly. This can be seen as an example of persistent currents Roger Vadim mentions in his answer.

You can make an electromagnet by winding a wire around a piece of steel. Suppose the steel is initially demagnetized. After you power the electromagnet with a battery and later disconnect the battery, the steel core retains some residual magnetization (assuming the magnetizing current was sufficiently high), producing a magnetic field. Ampere's law reads $$\vec \nabla\times\vec B = \mu_0 \vec J$$ and it is the current density $\vec J$ in the steel core (due to microscopic currents) that is the source of the magnetic field $\vec B$. Although these currents do not flow within the wire, they are still very much real.

23
Are voltages discrete when we zoom in enough?

0
Current without voltage?
0
Unsatisfactory explanation for the EMF measurement of a battery
51
What *exactly* is electrical current, voltage, and resistance?
1
What makes the internal resistance of a battery at microscopic level?
0
Would there be a potential difference across a cell connected with just a wire in complete circuit?
8
How does current flow in a circuit with a capacitor?
7
How does a resistor "know" to increase the potential difference across its ends?
0
Current flowing from lower to higher potential