Why does the normal force go down in an downward accelerating elevator?

When the elevator starts accelerating downwards there's a net force in the downward direction meaning that the body in the elevator now experiences three forces, the force due to gravity,the force that is causing the acceleration of the whole elevator and the normal force

Common misconception is that normal force equals weight. This is not true, and the normal force is usually determined from some assumptions. For example, for a body sliding on a ramp, the assumption is that the body does not move in the direction perpendicular to the ramp surface. This is one simple example in which normal force does not equal weight, even when the body is at rest.

from which it follows

It looks like you're imagining some kind of mechanism that actively accelerates the elevator downwards. But that's not what happens. 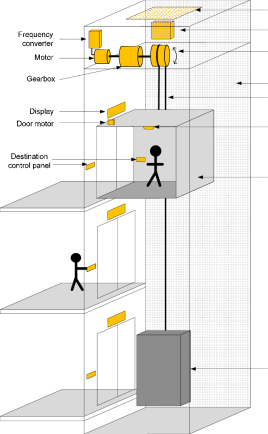 An elevator essentially1 hangs from a (counterbalanced) cable that's on a pulley. When the elevator needs to start moving down, the pulley is allowed to start rolling in a controlled way, which briefly reduces the tension (upward force) in the cable, letting gravity win. So it's gravity (diminished by the cable tension) that makes the elevator (and the passenger) accelerate downwards.

1 In reality, elevator designs may be quite a bit more complicated. There are also other kinds of elevators (e.g. hydraulic elevators).

When the elevator is standing still, you experience the normal force because you are being accelerated by gravity (meaning, and I'll come back to this later, that gravity is trying to increase your current instantaneous speed), but your surroundings (the elevator car) are fixed, so you sort of "run into" the floor. The normal force is essentially just the molecules of the floor not letting you pass through them, counteracting gravity.

When the elevator is accelerating, you still "run into" the floor, but since the floor itself is accelerating (at a smaller rate than 1g), you don't push into it as much, so the reaction force from the floor is lessened. So in your local (non-inertial) frame of reference, it feels like the strength of gravity has dropped (remember, if you were free falling, you'd feel weightless).

Now, this lasts only a short while, because the elevator soon starts moving at uniform speed, and the tension in the cable exactly counteracts gravity once again. So, now you're moving down, but there's no net force on the elevator. Remember, in absence of a net force, things want to continue moving uniformly in a straight line. Both you and the floor are moving down, but neither experiences a net acceleration, meaning that the floor fully counteracts gravity's pull on you once again - so you feel your usual weight. Since the elevator is now moving uniformly, it's an inertial frame of reference, so the force balance situation is the same as if the elevator was standing still! Gravity is trying to increase your current instantaneous speed - it doesn't matter if that speed is 0 m/s or 20 m/s or 1000 km/h; in fact, the exact number you put on your speed depends on your choice of reference frame. Gravity makes you "run into the floor" just the same, and the floor then reacts in the same way.

When you reach the bottom, the cable tension has to be greater in strength than gravity, because a net upward acceleration is required just to stop you and the elevator car. The floor is now trying to stop, and you aren't (not on your own), so you push into it harder, making the reaction force on you greater. In your local reference frame, it briefly feels as if the gravity has increased in strength.

There is a false assumption here that the person experiences the downward force on the elevator. This would happen if the elevator accelerates faster than gravity, which might cause the person to slam into the ceiling and then be pushed down by the ceiling, hence experiencing that force.

But that would still just be the normal force, which would have flipped directions, hence reducing below 0 and becoming negative. And somewhere before that, the lift would accelerate at the rate of gravity, the floor would fall away from the person, and they would experience free fall with a normal force of 0.

Not the answer you're looking for? Browse other questions tagged forces newtonian-gravity acceleration or ask your own question.

1
Why is it incorrect to to add accelerations when something is accelerating downwards and gravity is downwards?