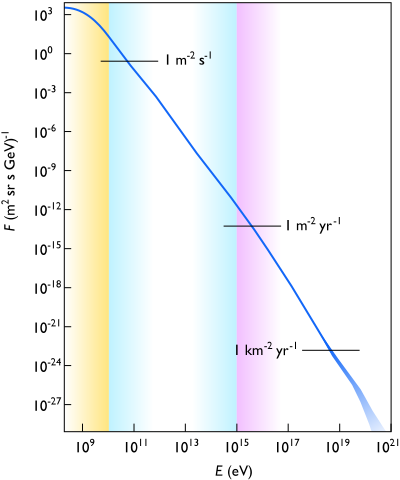 It's supposed to show the cosmic ray flux vs particle energy. I've never seen a "flux" written in these units... Why ${GeV}^{-1}$?

It is a differential flux. If you wanted to know the total particle rate per unit area, per unit solid angle, per unit time, with units $\rm m^{-2}\,sr^{-1}\,s^{-1}$, you would have to choose an energy interval that you care about and integrate the curve in the figure.

Some authors would write a monstrous differential symbol rather than $F$, like

to make explicit that the number of particles observed $N$ depends on your detector’s area $A$, its solid angle acceptance $\Omega$, your experiment’s running time $t$, and your choice of energy window.

The horizontal lines on the diagram are probably integrated over $4\pi$ steradians for all particle energies higher than the intersection of the horizontal line and the blue differential flux curve.

Not the answer you're looking for? Browse other questions tagged units cosmic-rays or ask your own question.

6
How does the 11-year solar cycle alter the cosmic ray flux?
2
Units in Special Relativity
4
Does an atom or proton (cosmic ray) get stretched when traveling through expanding space?
6
How to properly understand Gaussian Units?
3
Why is space radiation mainly positively charged? Where are all the electrons?
2
Why is interstellar cosmic radiation more energetic than radiation from our sun?