What does energy, momentum, etc mean in quantum mechanics?

Elementary particles are quantum mechanical entities. The quantum field theory model of describing their interactions developed in order to fit experimentally found values of crossections and decays. Experiments are designed to measure energy and momentum of the participating particles in the interaction, i.e. the four vectors of the observed particles.

For clarity let us take an event from a bubble chamber experiment, a famous one because it is a first observation of the $Ω^-$ particle. 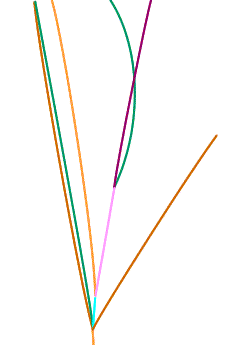 It is interpreted as particles:

and shows the generation and decay of an ${\Omega}^{-},$ the particle that fills up the prediction in the decuplet of hadrons.

The four momentum of the classically behaving tracks out of the interaction vertex are found by using the classical equations of charged particles in a magnetic field,

and using the ionization curves to get at the different mass identifications.

Not the answer you're looking for? Browse other questions tagged quantum-mechanics energy operators observables quantum-measurements or ask your own question.

3
What causes the spirals to be inward in the bubble chamber images?