Another misconception is that microwave ovens cook food "from the inside out", meaning from the center of the entire mass of food outwards.

It further says that

with uniformly structured or reasonably homogenous food item, microwaves are absorbed in the outer layers of the item at a similar level to that of the inner layers.

However, on more than one occasion I've microwaved a stick of butter, and the inside melts first, then the outside caves in releasing a flood of butter. (It may be relevant that my microwave turntable does not turn - but since I've done it more than once, I would not expect it to be a fluke of placement in the standing wave. And, the resulting butter-softness seemed very strongly correlated with depth, more than I'd expect from accident.) That sure seems consistent with the food absorbing more energy on the inside than on the outside. Given that this takes place over 30 seconds or so, I'd not expect much heat exchange to occur with the butter's environment (nor inside the butter itself), so that would forestall explanations of "the air cools off the outer layer of butter", unless I'm seriously underestimating the ability of air to cool off warm butter. So what's going on?

A microwave oven's microwaves have a half-wavelength of about 6 centimeters. While there are microwaves bouncing around in all directions and with all manner of offset origins inside the mirrored (for microwaves) interior of the oven, there's still a significant contribution to the energy deposited in the target that's from the primary beam. 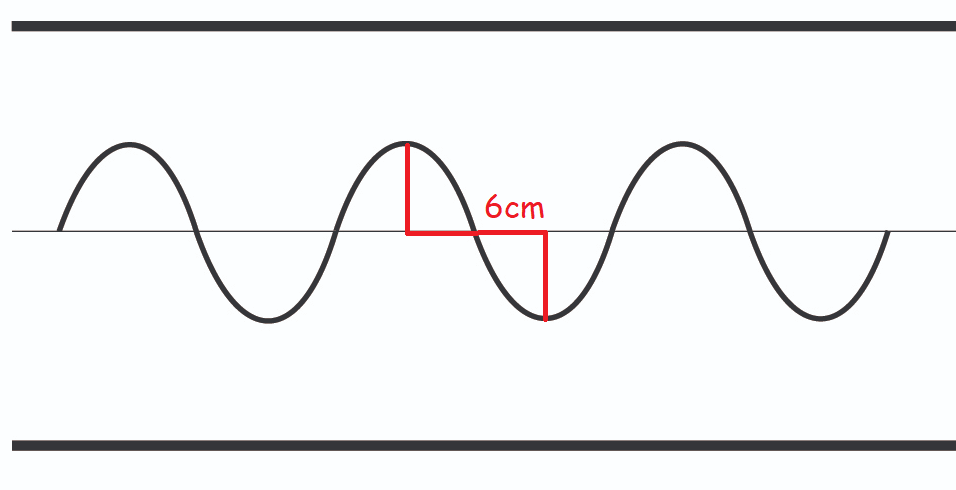 A stick of butter is around 12 centimeters long. Therefore, it's highly likely that a randomly positioned stick of butter has exactly one maximum amplitude point located somewhere between the end points. This point will receive the most energy and melt first. Because butter has a very low melting point, it only needs to receive a little bit more energy to melt first, and because it's not in a rigid container, the melted part can puddle down and expose the part that was previously shielded from the radiation by the outer layer to the same maximum amplitude point.

This does not in any way contradict the claim that microwaves cook from the outside in. They simply cook from the outside-in slightly more where the primary wave direct from the magnetron is bigger. A working turntable helps to reduce this effect to make for more even heating across the whole target.

As an aside - you can do a crude measurement of the speed of light if you line up two sticks of butter in a row, measure the distance $\lambda / 2$ between the places where they first start to melt, and multiply by twice the frequency $\nu$ listed by the manufacturer of the oven. $c = \lambda \nu$

A beam of microwaves penetrates into a food item, creating heat as it goes. For a thick item like a roast, the further the beams penetrate, the weaker the heating effect becomes as the beam gets progressively absorbed. This means that most of the heating is occurring within an inch or two of the surface.

However, that internally-generated heat has no easy escape path from the inside of the roast except to diffuse deeper into the cooler interior of the roast, since the outer layers of the roast are hotter.

By the way, microwave ovens all contain either a turntable or a rotating "mode mixer" at the mouth of the feed horn so the microwaves will fill the oven cavity more or less evenly and thereby bathe all surfaces of the roast more or less evenly, thereby preventing any local hot spots from building up.

I think there are two major avenues of heat loss, which surprisingly have not been considered by others:

Add to that air-cooling (mostly by convection) of the outer surface, and you get the hottest being somewhere inside rather than on the outside.

When people say "It's a myth that a microwave heats from the inside out", they are trying to correct the impression that heating starts in the very middle of a large item like a roast, and works its way out. For something thin or narrow like a stick of butter or a single serving of pasta, pretty much the whole item consists of "outer layer", so heating is fairly uniform throughout except for variation caused by the microwave variability (which means that it is actually not uniform at all).

The answer by g s explained why the most melting would be between the two ends of the stick, but I have the impression that you are seeing the interior melt before the top surface. What I suspect is happening is something like this:

Added later: I did some research. If you google "microwave penetration depth" you will find different sites giving reasonably consistent values. For water at room temperature it's around 1 to 1.5 cm, but it's more for cooked meat.

It's also important to note that there is no sharp cutoff. The penetration depth is defined as the depth at which the power is $1/e$ of the level at the surface, or about 37%. If you go the same distance further in, it will be 37% of 37%, and so on.

Also, the more efficiently it heats, the shallower it penetrates. An analogy might be carrying a plate of hors d'oeuvres into a large crowded party. Water is like a hungry crowd that takes snacks quickly (but still takes fewer if they see the plate is getting empty, so you get that exponential decay). So you don't make it far into the crowd, but they get filled up quicker, just like water heats up quicker. Meat is like people who are too busy talking so not as many people grab the snacks. You make it farther in but the crowd is less satiated. And glass is like a room full of kids who can't even see what's on the tray as you heartlessly walk all the way across the room.

Butter is a mixture of water and fat, so the penetration depth will probably be greater than 1.5cm, but I don't know what to guess.

The whole reason why microwave ovens have turntables is that they always heat food unevenly because standing waves form inside them: 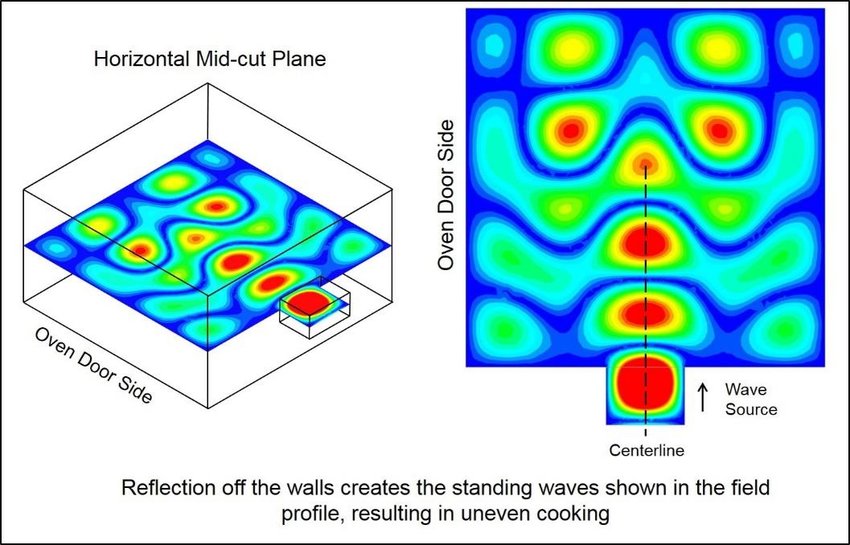 If a wave's antinode (where most energy is released) happens to be in the middle of your butter stick, the butter will melt in that place first, and may even explode if the temperature inside reaches the boiling point of water (there's often some water in the butter) before the sides of the stick have a chance to melt.

Simple, common sense answer without introducing unnecessary concepts like speed of light or the meaning of $1/e$ in the context of this question.

The microwaves have to penetrate the object in order to heat it. As they penetrate the object, they gradually lose energy the deeper they penetrate. It is just that the penetration depth before any significant energy loss occurs is much more than the thickness of even the thickest dish that could fit into a microwave oven, and the wavelength of microwaves is also comparable to the dimensions of objects being heated. Nonetheless, still, the microwaves are the least attenuated, and thus the strongest, at the outside of the object. No such a technology exists that would allow to EM waves to somehow penetrate inside an arbitrary object and have that object absorb more energy deep within itself rather than on the surface. Therefore, it is fantasy that microwave ovens cook from inside out.

You guys are complicating the whole thing. Butter melts at a relatively low temperature. So too, the difference between "solid" and "liquid" is very small. Microwaves penetrate from around outside of a food stuff about ½". How thick is a stick of butter? Just over an inch. If microwaves pass into food ½" then they pass in from all sides ½". So where do they meet, combine or cancel each other out? In the center of a stick which is about 1" in cross section.

Not the answer you're looking for? Browse other questions tagged thermodynamics temperature microwaves food or ask your own question.

4
If a microwave oven disk rotates to warm up food, why doesn't it go up/down/sideways?
0
Why does a solar oven need a transparent lid?
0
Microwave cooking
2
Why microwave oven makes dried bread soft?
0
X-rays / Gamma rays "oven" vs microwave oven
20
Why does chocolate burn if you microwave it with milk?
0
How does a microwave steamer work?
10
Physics of the convection oven