Let us imagine that some object (A car possibly) is moving in a circular path. At some point of time let's say that the driver of car made a turn in order to follow the circular motion. Now my textbook claims that, The friction is but the centripetal force that is acting on the car.

Upon searching on the internet I found a plenty of answers but all of them were handwavy (At least for me).

Is there any mathematical approach to this?

TL;DR A particle that undergoes uniform circular motion has a net (resultant) force that points (always) towards the center of motion. In case of a level curved road, the friction force is the only force that can provide the radial force component.

You should start backwards with this problem, i.e. from a net (resultant) force. A particle in uniform circular motion has a net force that points towards the center of circular path, hence the name radial force or centripetal force:

Now assume that the car travels on a level (horizontal) road. The three (significant) forces that act on the car are (i) gravitational force (weight) exerted by Earth, and (ii-iii) normal and friction forces exerted by the road surface. There is also air drag (resistance), bet let's neglect this force at the moment. In this particular case, weight $\vec{w}$ and normal force $\vec{n}$ are equal in magnitude and opposite in direction, i.e. $\vec{w} = -\vec{n}$. 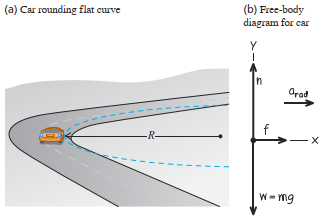 When the car enters a circular path, assuming it travels at constant (uniform) velocity, the net force on the car is given by

Banked curved road with no friction

without any (static) friction force. This is of course idealization - in reality there is always some friction. I leave this analysis of banked curved road with friction to you.

Not the answer you're looking for? Browse other questions tagged newtonian-mechanics rotational-dynamics friction centripetal-force or ask your own question.