Do neutrons fall to the center of the earth?

Neutrons have no electric charge so they don't interact with the electric and magnetic fields, have mass so they do interact with gravity and are smaller than nuclei so they pass through most atoms, which are mostly empty space. I imagine that, over time, neutrons (slow ones) scatter off of nuclei and eventually lose any momentum in the direction perpendicular to the gravitational field and then just fall like little balls bouncing left or right as they scatter off nuclei on their way down, all the way down to the center of the earth where they interact with other such neutrons through fission.

Do neutrons fall to the center of the earth or are they "captured" by nuclei before they get there?

To put some data on the comments above, here is a plot (from ENDF) for O-16 of the cross section vs neutron energy for all neutron interactions (blue) and just neutron capture to make O-17 (green): 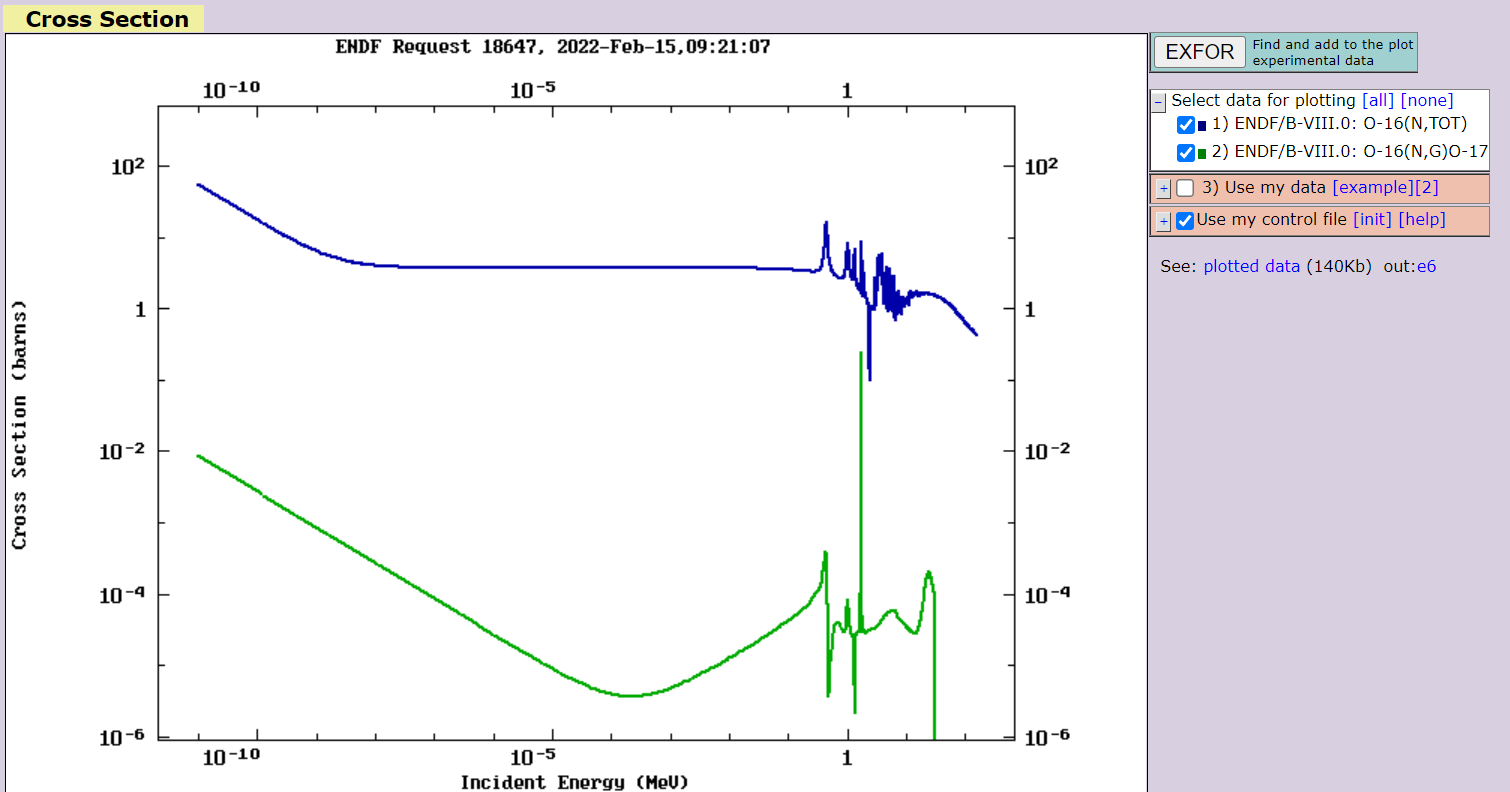 At low energies, sure, neutrons will do many things other than getting absorbed. What they are mainly doing is scattering elastically (trying to plot the elastic scattering cross section results in a line right on top of the total cross section out past 1MeV - such are log scales). But still, at really low neutron energies the cross section for absorption is about 0.01 barns. Now rocks are mostly oxides, and solids are usually a few $10^{22}$ atoms/cm$^{2}$, so lets take an average rock as $10^{22}$/cm$^{3}$ of O-16. From a cross section of 0.01 barns ($10^{-26}$ cm$^{2}$), a neutron would have to travel about 100 meters (total path length) before being absorbed.

I will leave it as an exercise for the reader to determine if a thermal neutron will travel that far before its 10 minutes of life as a free neutron is up or not.

As for the elastic scattering, since the cross section is 4 orders of magnitude higher at the lowest energies, the neutron goes about 1 cm before scattering. Kinematically, since the neutron is lighter than a nucleus, it can scatter in all directions. Estimating this as a 3D random walk, that total path length of 100 meters results in a much smaller net movement, less than 10 meters.

Cosmic rays generate free neutrons by spallation from nuclei in Earth’s atmosphere, Earth’s crust, and Earth’s deep interior. Not many cosmic rays reach the deep interior, because the Earth is a pretty good shield.

Solid rock is opaque to neutrons for the same reason that clouds are opaque to light. Consider that storm clouds are made of water droplets and ice crystals, which are almost totally transparent. Why, then, does it get dark under a storm cloud? The water droplets and ice crystals in the cloud are very efficient scatterers of light, and so light anywhere within the cloud is reoriented in a random direction, just as likely to be going back up towards the sun as to continue down towards the ground. As the cloud gets thicker and thicker, the fraction of sunlight that diffuses through to the bottom of the cloud gets smaller and smaller. Clouds don’t ever completely block sunlight (on Earth), but our mostly-transparent ocean does have the bathypelagic zone where no sunlight penetrates.

The mean free path of a neutron in rock depends on the chemical makeup of the rock, and the probability that the neutrons will capture versus scatter from each chemical species in the rock, and its density. But consider that a nuclear reactor, which contains a lot of free neutrons, is effectively shielded by tens of meters (not hundreds of meters) of water and concrete. The mean free path of a neutron underground is going to be more like ten meters than like a kilometer. Neutrons from the surface are not going to diffuse down to Earth’s core.

A neutron which leaks upward out of Earth’s surface is going to have scattered enough times that it’ll have roughly the same temperature as Earth’s surface, and so will behave like a component of Earth’s atmosphere. The scale height for atmospheric neutrons will be more like the scale height for hydrogen and helium than like the scale height for nitrogen or oxygen, so the neutrons can diffuse up into the exosphere. The fraction of ground-level atmospheric neutrons which escape to the exosphere before decaying or being captured (mostly by nitrogen) would be a nice homework problem.

8
What happens to Cosmic Ray Neutrons at the Earth?
1
Why are Nuclei stable and what do neutrons change there?
10
Period of oscillation through a hole in the earth
1
Why fast neutrons for breeder reactor but slow neutrons for regular light water reactor?
0
What are the natural forces that slow the neutron down?
1
Would a micro black hole keep oscillating around the center of Earth forever?
0
Thermal neutrons and fission