Why do iron filling stick to the places instead of pole in magnet?the pole have maximum strength, shouldn't they stick to the pole?

I don't understand how magnetic field work.Lets assume there is a random iron filing near a bar magnet,and it is present near the middle of the bar magnet,where the north and south pole of the magnet meet,it is not on the magnet,but near the area where the 2 poles of magnet meet,IT IS PRESENT NEAR THE NON POLAR REGION(REGION OF THE BAR MAGNET INSTEAD OF POLE),When an iron filling is present,magnet applies a force on it,then it spins and aligns itself in the direction in which it experiences force,which is a part of the magnetic field line passing through that point,but, if that force is enough to overcome friction,it will go and stick with the magnet,but,since maximum strength is at the poles,why doesn't it go and stick to the poles?why some iron filling stick in non polar region(places instead of pole of the magnet) of magnet?if it is due to friction,how did they overcome the friction to go and stick with the magnet in non polar region?a random iron filling has 2 choices,if magnetic force is enough to overcome friction,it has choice to go and stick in the poles of the magnet or in the non polar region,why doesn't it go to the pole?if u say the friction involved in going to the polar region is more than the friction involved in going to non polar region(Because it is closer to the non polar region),then it should try to go to the pole and stop in the middle of its way,why doesn't it even try to go the pole,can somebody explain it to me,I'm in 10th grade and I know only a few basic things,but these doubts still trouble me,if I'm wrong somewhere, please correct me 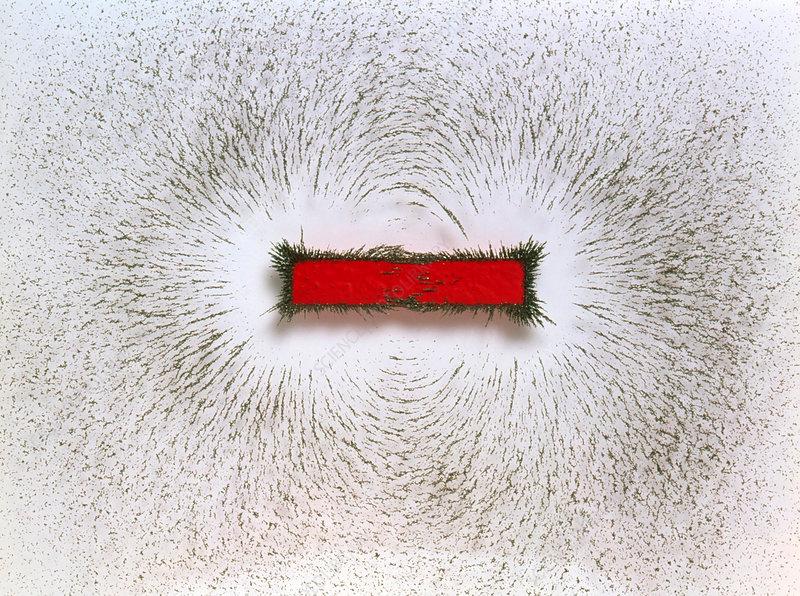 Friction needs to be overcome somehow to form patterns like this. Often this is done by sprinkling the filings, so the magnetic field can pull them into place as they fall. The magnetic force on each filing is along the lines they form, rather than sideways. Even when there only a few filings stuck to the magnet, you can notice how they stand up rather than lying flat. In this situation the filings might tend to move towards the ends of the magnet because the field is stronger there, but friction prevents it.

If the iron filings experienced no friction, and no interference with other iron filings, then they would each tend to move to one or the other of the poles where the magnetic field is strongest.

However, the filings do experience friction, and it is only in areas where the magnetic force is sufficiently strong that the filings move away from their location, as opposed to just rotating.

In the picture, you will see an area which is almost devoid of filings, and that is the area where the field is strong enough to overcome the friction and cause filing translation.

Outside of that area, the filings mostly rotate (without translation), although there is an effect whereby the filings make a local disturbance in the magnetic field, and cause nearby filings to join up with them.

18
Why iron filings sprinkled near a bar magnet aggregate into separated chunks?
5
Why don't the iron filing all goes to the North pole?