Why is ozone $\rm O_3$ in the Earth's upper atmosphere?

If you look at the density table, you will see that ozone has the highest density among other gases, so why is it in the upper layer of the atmosphere, in the picture I schematically drew how the earth's atmosphere should look in my view. 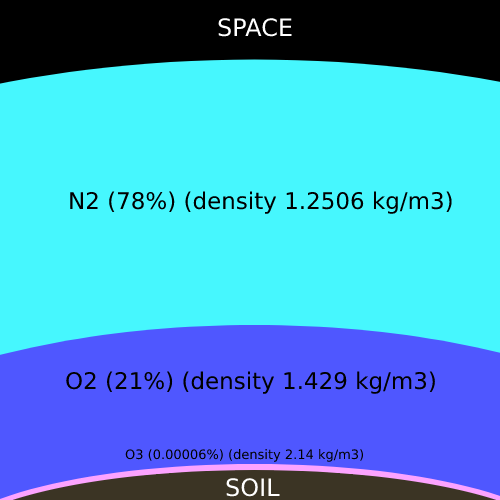 There is ozone production at all altitudes, but a majority of it is in the uppermost regions because at these heights, ozone is produced at much higher rates.

There is less ozone production at lower altitudes because the once higher energy light at greater altitudes gets scattered on its journey down, loosing energy on the way, so that at lower heights ozone production occurs at a much smaller rate. Also note that the ozone molecule has a short lifetime (from 30 minutes to 2 hours before turning back into oxygen). That is, $$O + O_3\rightarrow 2 O_2$$

Not the answer you're looking for? Browse other questions tagged atmospheric-science earth air molecules geophysics or ask your own question.

5
Why is the atmosphere transparent in the visible spectrum?
10
Diffusion of gases in the atmosphere
1
What kind of damage is expected to happen to the earth in case of being hit by a direct gamma ray burst?
0
Use of the ideal gas law for Earth's atmosphere and the role of density
28
Why doesn't Earth's atmosphere form bands due to different rotational speeds?
0
What is causing the Trumpet Sounds that are emited from the sky?
1
Estimating the upper limit for cloud formation?