I'm learning the Reissner–Nordström metric and confused by the notion of irreducible mass $M_\text{irr}$. It is said that the "total mass" $M$ contains both the irreducible mass and the equivalent mass from the electric field, $$ M = M_\text{irr} + \frac{Q^2}{16\pi \varepsilon_0 G M_\text{irr}} \ . $$

I wonder what is the physical meaning of the irreducible mass?

I wonder what is the physical meaning of the irreducible mass?

This concept naturally arises when formalizing the irreversibility of classical processes involving black holes (classical here is meant as non-quantum, in what follows we completely ignore quantum effects around black holes, such as Hawking radiation). Intuition for this irreversiblility is quite simple: we can drop a particle in a black hole and there is no way of getting it back. However, if we start considering rotating and charged black holes it is easy to see that during black hole's evolution its mass, angular momentum and charge (i.e. all the parameters that according to “no-hair” theorems specify stationary black hole state) can either increase or decrease. But there is no way to decrease the irreversible mass: during black hole evolution it either stays the same or increases. And irreducible mass stays the same not only when the state of black hole does not change but also when the black hole evolves via a special kind of reversible processes.

To understand the difference between reversible and irreversible changes of black hole states let us consider “Penrose process” as a model for a black hole's change of state following the discussion in lectures by T. Damour & M. Lilley, section 2.1. Particle falls toward black hole, splits in two near (but outside) its event horizon with one part being absorbed by the black hole while the other escapes away (see the figure, note that for RN black holes we can ignore angular momentum $p_\varphi$) 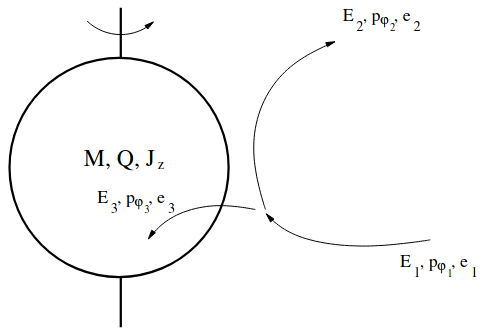 The split allows on one hand for the in-falling particle to be in a state incompatible with falling from infinity (such as having negative total energy) and on the other hand escaping particle may carry energy, charge, angular momentum away from the black hole (which is needed if we expect that some of the changes in black hole states could be reversed).

When particle 3 gets absorbed by the black hole its charge and energy would correspond to the changes in charge ($\delta Q$) and mass ($\delta M$) of the black hole. Omitting the calculations (which could be found in the cited lectures) those changes are related via the equation: $$ \delta M=\frac{Q \delta Q}{r_+(M,Q)}+|p^r|, $$ where $r_+(M,Q)$ is black hole event horizon radius, $p^r$ is the radial component of particle's momentum (it remains finite on the horizon). The nonnegativity of $|p^r|$ means that $$ \delta M \ge \frac{Q \delta Q}{r_+(M,Q)}.\tag{*} $$ This inequality is what provides the distinction between reversible (corresponding to “$=$” sign) and irreversible (strict “$>$” sign) processes. Reversible process of absorption of a charged particle with $p^r=0$ and subsequent absorption of antiparticle with the opposite charge and again with $p^r=0$ would leave the black hole in the original state. Integrating the equation for reversible process$$ \delta M = \frac{Q \delta Q}{r_+(M,Q)}, $$ would produce the mass formula from OP, which in geometric units $G=c=4πε_0=1$ reads: $$M=M_\text{irr}+\frac{Q^2}{4 M_\text{irr}}, $$ where the irreducible mass arises as an integration constant. Inserting this formula into ($*$) gives us $$ \delta M_\text{irr}\ge 0.\tag{**} $$ There is a strong similarity/connection between thermodynamics and the laws of black hole mechanics, within this paradigm reversible process for black holes are equivalent to adiabatic processes for ordinary systems. The irreducible mass then must be some monotonic function of the black hole entropy, so that ($**$) is a restatement of the second law of thermodynamics. And indeed we can express the surface area $A$ of the stationary black hole horizon through irreducible mass: $$A=16\pi M_\text{irr}^2,$$ which together with Bekenstein formula, $S_\text{BH}=A/4$, gives us another interpretation of the concept: irreducible mass $M_\text{ir}$ of charged / rotating black hole is the mass of Schwarzschild black hole with the same area of event horizon (or, equivalently, with the same entropy).

Armed with this knowledge we can answer further questions of OP:

Ignoring radiation of falling electrons and assuming black hole does not gain considerable linear momentum the new mass would be: $$ M=M_0+\sum_{i=1}^{10} \varepsilon _i, $$ where $\varepsilon _i$ is the energy of $i$-th electron. The irreducible mass of this new black hole state would be larger than $M_0$ but smaller than this new mass $M$, the difference $M-M_\text{irr}$ could be interpreted as the energy of electric field outside the horizon.

Reversible process for black holes is an idealization (just like other adiabatic processes encountered in thermodynamics textbooks) but it is possible to describe process that would come close. Take a spherical shell of matter (or just a system of charges) with very small mass $\mu$ carrying the charge of $-Q$ (minus the charge of the black hole). Lower this shell using system of ropes toward the black hole horizon stopping at a very small (but positive) distance $d$ away from it. Release the shell so that it falls into the black hole neutralizing it. In the limit $\mu\to 0$, $d\to 0$ the result would be Schwarzschild black hole with $M=M_\text{irr}$. To see that it is indeed so, note that ropes lowering the shell transfer the energy of electromagnetic field away from the black hole (and if we put generator at the winch that lets this rope out we can convert this energy into useful work). In the idealized limit the entirety of energy available outside the horizon is removed leaving us only with irreducible mass.

However, if we pair the two processes paired above, then thermal Hawking radiation occurs as well (when $Q\ll M$).

Not the answer you're looking for? Browse other questions tagged general-relativity black-holes reissner-nordstrom-metric or ask your own question.