Guidelines to calculate moment of inertia

The moment of inertia is defined as

but I am not sure how to proceed with solving the above integral. All examples I have seen seem to be done with different strategies. They usually start: "well consider this part of the mass $dm$" and then suddenly just plug in $2 \pi r $ and the answer miraculously pops out.

I can not find some (good) guidelines on how to solve the integral. What function is actually integrated, because both mass $m$ and distance $r$ can be variable in one another:

Below you can find three examples on how to calculate moment of inertia for a cube and a cylinder. Make sure to understand these examples before you move on to more complex problems (objects). For anything more detailed than this, consult some book on calculus on how to deal with double and triple integrals.

Moment of inertia in general case

The idea is simple - imagine an object is composed of many many infinitesimally small particles of mass $m_i$ at distance $r_i$ from the axis of rotation. To find moment of inertia you just sum distance squared times mass of each particle

The above equation works well in discrete case, but in continuous case the sum becomes integral

where $\mathcal{V}$ is the volume that object occupies in 3D. Now the only thing you have to do is to represent the infinitesimally small mass $dm$ as a function of distance $r$. For objects whose density $\rho$ is constant (homogeneous objects), the mass can be expressed as

where $dV$ is infinitesimally small volume. The integral in Eq. (1) now becomes

Moreover, if object's cross section does not change along the axis of rotation, the above equation can be further simplified:

where $h$ is object length along axis of rotation, and $\sigma$ is mass-area density of the object. The above simplification converts triple integral (volume) to double integral (area), which is much easier to depict. The integral in Eq. (2) now becomes

In all cases discussed here we assume that the axis of rotation goes through the origin. You are allowed to place the origin wherever it is most convenient to solve a particular problem (integral)!

In Cartesian coordinates, the infinitesimally small area and distance from origin are defined as

In polar coordinates, the infinitesimally small area is defined as

Example 1: Cube with all sides equal to $L$

Assume that the axis of rotation goes through center of mass and is perpendicular to two faces. Moment of inertia is

where $M = \sigma L^2$ is the total mass of the cube. Integration is done in Cartesian coordinates, and the axis of rotation is placed at the origin.

Assume that the axis of rotation goes through center of mass and is perpendicular to cylinder's base. Moment of inertia is:

where $M = \sigma R^2 \pi$ is the total mass of the cylinder. Integration is done in polar coordinates, and the axis of rotation is placed at the origin.

where $M$ is total mass of the object and $d$ is distance between the two parallel axis.

We could have calculated this using the parallel-axis theorem. The axis of rotation is at the distance $d = \frac{\sqrt{2}}{2} L$ from axis that goes through center of mass, hence

The mass properties of an object are found using a volume integral.

The general procedure is a mathematical summation of the volume of the solid. There are several steps needed to be taken to get the final result and they are outlined below: (caution, calculus ahead)

The above describes MMOI in the most general approach possible, in order to be able to apply it to various scenarios.

Ok, so I understand that you recently started learning about MOI. I will try to explain what is happening there.

at a distance of r from the axis as

Now I called it a point mass because MOI is distant dependent. If the same mass m is distributed over a certain area, then the inertia would be different.

Now for 2D objects like disc, mass is distibuted areally. Therefore we find mass per unit area first. Now we take up all "pointed" elements over any variable distance x. These set of pointed elements gives us a ring(in case of disc).Now to find the mass of elemental ring, we need it's area.

Here comes an interesting step. We convert the ring into a rectangle by breaking at its joint. It's length is 2pir and breadth is dr. Hence area is 2pir*dr. Multiplying with areal density gives mass and hence integral can be calculated.

Keep in mind objects have different moments of inertia depending on how they are spinning. Flip a coin, that's one moment of inertial. Spin it about an axis normal to the center of one of its faces, that's another. Offset that axis to the side a bit, and flip, that's yet another. An object may also have variable density. Also remember $r$ in question is a measure of the distance from the infinitesimal mass element to the axis of rotation and not distance from origin.

By Fubini's Theorem, you can rearrange the order of integration and do part of the triple integral to get:

It's the same integral, simplified so you only have to worry about the $r$ integration. That's where circumference comes in because it is multiplied by an area term to give you volume.

Notice we retain the same moment of inertia from the regular flipping case plus an $Ma^2$ term, the mass times the off center distance squared. This is an example of The Parallel Axis Theorem

How to obtain the inertia tensor for rotation symmetric figure. 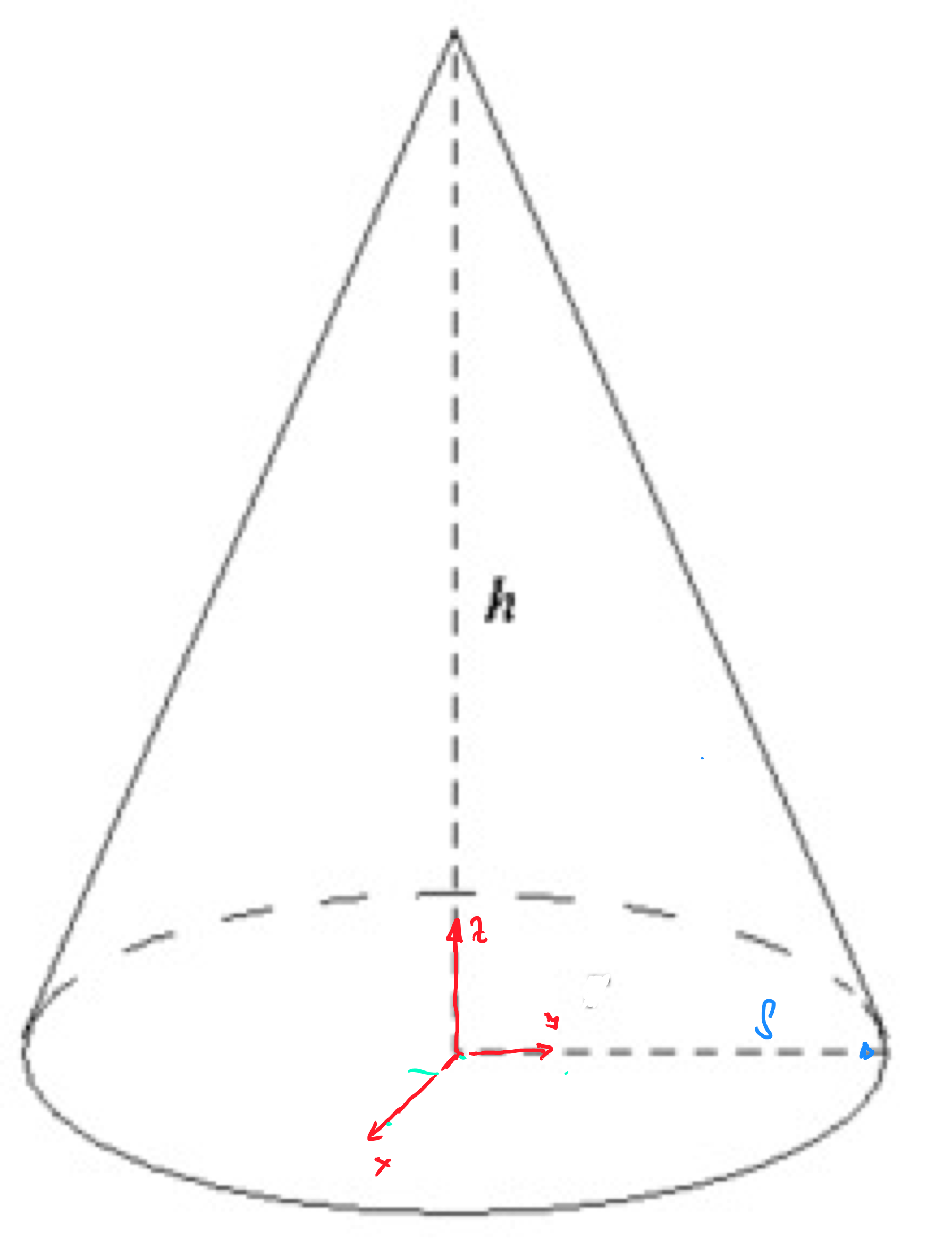 Not the answer you're looking for? Browse other questions tagged newtonian-mechanics integration calculus moment-of-inertia or ask your own question.