To what extent are quantities fundamental?

Arguably the most well-known and used system of units is the SI-system. It assigns seven units to seven ‘fundamental’ quantities (or dimensions). However, there are other possible options, such as Gaussian units or Planck units. Until recently, I thought that these different systems differed only in scale, e.g. inches and metres are different units, but they both measure length. Recently though, I discovered that it is not simply a matter of scale. In the Gaussian system for example, charge has dimensions of $[mass]^{1/2} [length]^{3/2} [time]^{−1}$, whereas in the SI-system it has dimensions of $[current] [time]$. Also, I have always found it a bit strange that mass and energy have different units even though they are equivalent, but I find it hard to grasp that a quantity can be ‘fundamental’ in one system, and not in an other system.

Does this mean that all ‘fundamental’ quantities are in fact arbitrary? Would it be possible to declare a derived SI-unit fundamental, and build a consistent system with more base units? What is the physical meaning of this?

where F is the repulsive force between two electrical charges, Q1 and Q2 are the two charges in question, and r is the distance separating them. If Q1 and Q2 are expressed in statC and r in cm, then F will come out expressed in dyne. By contrast, the same law in SI units is:

where $ \epsilon_0 $ is the vacuum permitivity, a quantity with dimension, namely (charge)2 (time)2 (mass)−1 (length)−3. Without $ \epsilon_0 $ , the two sides could not have consistent dimensions in SI, and in fact the quantity $ \epsilon_0 $ does not even exist in Gaussian units. This is an example of how some dimensional physical constants can be eliminated from the expressions of physical law simply by the judicious choice of units. In SI, $ \frac{1}{\epsilon_0} $, converts or scales flux density, D, to electric field, E (the latter has dimension of force per charge), while in rationalized Gaussian units, flux density is the very same as electric field in free space, not just a scaled copy. Since the unit of charge is built out of mechanical units (mass, length, time), the relation between mechanical units and electromagnetic phenomena is clearer in Gaussian units than in SI. In particular, in Gaussian units, the speed of light $c$ shows up directly in electromagnetic formulas like Maxwell's equations (see below), whereas in SI it only shows up implicitly via the relation .

Yes, I would argue that 'fundamental quantities' are indeed arbitrary, as are many of our choices, such as base-10 number systems. This is illustrated well on the Golden Record we put on voyager spacecraft, for decoding by other intelligent life; we show how fast to spin the record by relating time units in the fundamental transition of the hydrogen atom: 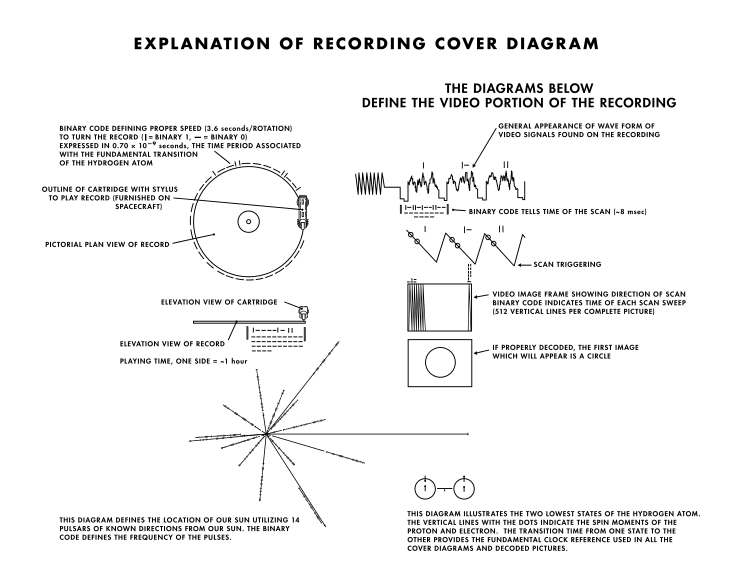 I'd then add that we have tried to make them as least-arbitrary (to us) as possible, but there's no reason that some other intellegence would have different 'fundamental unit' definitions and scalings, or whatever 'arbitrary' units they came up with. We could use $ (time)^{-1} $ or 'period' as our fundamental timing unit, and change all the other derived units to follow, if we wanted.

The Si - Units are just a definition which are related by euqations. Take for example the speed of light $c \approx 3\cdot 10^8\frac{m}{s}$. Now what does $\frac{m}{s}$ mean? You can take it as a parameter that is connected to other units by equations like the famous $E = m c^2$. Since only the equation is important and you have to define your unit somehow you could also say that $c = 1$.

What I did here is nothing else than to set $$\frac m s = \frac 1 {3\cdot 10^8}$$ You can always do this for the first unit you change, but you have to be careful if you change a second unit as those units may be connected by an equation.

Take again $E = mc^2 = m$ where I have set $c = 1$. Now there is one more independent unit: Either mass or energy which you also can choose as you like. As you can see there is an infinite number of possibilities to choose the units, but as people have to communicate it is a very good advice to keep on the standard units in the different fields of science.

One should remember that 'length', 'mass' and 'capacity' are the base standards of the commercial systems, where 'capacity' is volume measured by bulk comparison, eg pouring or weighing.

NASA, for example, used the inch-pound-second system, since these are the base units defined in US legislation. The unit of 'slinch' (ie 386 lb = ips slug), has been observed, along with a measure of a slinch-mole (written as (lb-g-s^2/in)-mole ).

The scientific systems are essentially selected from length and mass, along with a time unit. There really is no need to follow the legal standard, except you might run into legal problems down the track.

The number of base units depends on the number of free variables you would have in a system. The size of the units do not change with dimension, this is because the dimension is relative to a body of equations, which define X quantities in (X-B) equations. The B remaining quantities are defined in the preamble.

For example, the mole was a derived unit, essentially "mass/daltons". The daltons were found from the chemical tables, and divided into mass, to give mass-mole. This is a derived unit, with dimensions M.

In SI, the coherent unit is not 'dalton' but 'kilodalton', so the unit mole is actually 'kilogram / kilodalton', but the tables still show the weights in daltons. So there is an additional constant in the CODATA tables that gives kilodaltons. (ie 1 kg/dalton = 1000 moles)

Were one to construct base units that actually meant something to science, then the choice would be something like density, velocity, time. Density is something that really is constant from atoms to stars. Velocity is consistant with the thermal state of things. Size is then dependent on the appropriate power of time. In SI, replacing time with 10^-9 seconds, would pretty much eliminate all of the exponents in the CODATA atomic values, and with t=10^-12, v=10^3 (ie thermal velocities), nearly all exponents disappear.

The correct approach to dimensions is to simply regard them as algebraic blobs, which can be multiplied, divided etc. Note that any given system does not have a full set of dimensions, and a full set would make the mathematics unwealdy. None the same, Leo Young in 1961, showed a set of equations, to which the cgs-gaussian, and SI were both coherent to, by supposing two additional base units assumed different values in the different systems.

Not the answer you're looking for? Browse other questions tagged units spacetime-dimensions or ask your own question.

7
What is the unit of time on the Voyager Golden Record?
1
Complete list of fundamental properties