The location of the exact center of the observable universe

If simultaneously in every direction, I were to precisely measure the distance to the edge of the observable universe (not: the physical universe), then would I find myself exactly in the center with zero error tolerance? Would it make a difference if I were accelerated in relation to some point in the universe, to nearly the speed of light?

At the time I wrote this answer, other answers are pointing out that the universe has no unique centre, but I take it that you know this and you are asking about something else. I think you are asking about how the observable universe relates to the entire cosmos (which we cannot observe in full), and whether it depends on your state of motion.

The "observable universe" is usually defined to be those physical things (such as galaxies) whose worldlines intersect the past light cone of whichever observer is concerned. By this definition each observer is located at the centre of what the "observable universe" is for them. Observers located sufficiently far apart will have different past light cones and therefore they find different parts of the entire cosmos to be observable. (This statement assumes that the entire cosmos is larger than the part observable by anyone; this is not necessarily the case but it's a reasonable starting-point for thinking about cosmology and it seems likely to be correct.)

Actually, we make the measurement you suggest, at least, sort of. By measuring the Cosmic Microwave Background, we do observe light from all directions that was emitted at the same time.

(That itself does not strictly mean that it has traveled the same distance, but in our standard cosmological model those two notions are the same; in any case I believe the spirit of the question does not care about that subtlety)

What we find is that the CMB is not the same in all directions, but that there is a strong dipole. That is, after you subtract the average CMB temperature and make a all-sky map of the residual, this is what it looks like (in Galactic coordinates, image from the COBE satellite): 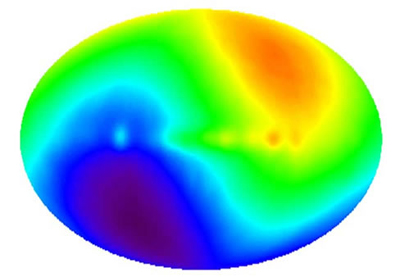 The standard explanation is that this dipole comes from the fact that with our Earth we do have a significant proper motion through the universe, which causes this observed Doppler shift.

Now your question can be rephrased: If you measure the proper motion of Earth through the background-averaged universe in some other way, then you can calculate the expected dipole on the CMB from the corresponding Doppler shift. What I am asserting is that that calculated dipole is exactly what we observe, or in other words, that the proper motion in your thought experiment actually exists, but has no effect on the (inferable) isotropy of the observable universe. Thus, "yes" is the answer to your first question, "no" to the second.

Curiously and interestingly though, we actually don't know that for a fact yet! See this paper for details, together with the prediction that upcoming observations with SKA will be able to confirm this prediction, and with it, our standard cosmological model. I'll pick up my beer for this answer once SKA publishes that result ;)

It is the two dimensional analogue of the Big Bang model, the current model of cosmology, which is in three space dimensions and one time dimension, expressed in four vectors. . The hypothesis that the universe started expanding 13.8 billion years ago from a singularity fits well enough all the observations at present and so , all present points of the universe were at that original expansion point and can be considered the center of the observable universe.

If simultaneously in every direction, I were to precisely measure the distance to the edge of the observable universe (not: the physical universe)

As there is no single edge on the balloon analogy, every two dimensional observer would measure the same distance on the surface of its observable universe (whatever the observer's instruments would be). In an analogous way because all our present points were at the Big Bang point (assuming the model is reliable) there would be no edge to be found beyond what our instruments sensitivity would allow.With the same instruments the same distance would be measured from all points of our observable universe.

Would it make a difference if I were accelerated in relation to some point in the universe, to nearly the speed of light?

As long as Lorentz transformation are found to hold strictly in our observable universe, no.

Anna V is exactly right. Here is another way of thinking about this which might be of some additional help.

If the big bang is true (lots of evidence indicates it is) but the universe did have a center, then that point would represent the point of origin of the big bang. This means that instead of originating out beyond the farthest galaxies we can detect in all directions, the cosmic microwave background would appear to emanate from that one point (or from a region in space that is as big as the universe was when recombination occurred).

Now, how could we prove that the universe had a center, and then locate it in space? One way as you suggest would be to measure the distance out to the "edge" (whatever that would be) in all directions, and then use geometry to determine where the actual center was.

But another way to do that would be to have a magic wand which would tell us how fast we were moving relative to the center, and then point that in all different directions. These different directions would then all point toward the true center of the universe, which would by the way coincide with the microwave source I described above.

But alas, special relativity rules out the existence of any such device that would let us determine whether we are standing still relative to some moving object, or if it is standing still and it is we who are moving relative to it.

Not the answer you're looking for? Browse other questions tagged general-relativity cosmology reference-frames big-bang observable-universe or ask your own question.

63
Can space expand with unlimited speed?
54
Does the universe have a center?
6
Conversion between extragalactic distances
1
Non-observable universe vs last scattering surface