Time dilation in an approaching object - contradictory to Doppler's effect?

I was trying to prove that we observe time dilation in fast moving objects, however I got something like Doppler effect: if an object is going closer to us, shouldn't we see that time in that object goes faster instead of slower? Imagine a spaceship going to Earth. The spaceship contains a clock that sends a light impulse every 1 second. It goes to us with c speed (of course it doesn't sum up with spaceship's speed - it's the same for every observer). If the ship didn't move, we would see the impulses every second (delayed a constant time), but it moves, so each impulse's delay is shorter, so time interval between 2 impulses gets shorter. It's similar to Doppler's effect - instead of pulses each second there could be times when the lightwave has the same phase. Please tell me what's wrong with my reasoning.

The Doppler effect causes our view of distant events either to be speeded up if we are moving towards them, or slowed down if we are moving away from them. It is caused by the changing distance between us and the events, which causes light to have to spend more or less time travelling from them to reach us.

In SR, time dilation refers to the fact that the elapsed time between two events that occur in the same place in one frame is always less than the elapsed time between them in any moving frame (in which, as a consequence of the motion, they do not occur in the same place). Time dilation arises from the relativity of simultaneity, which means that planes of constant time in one frame a sloping slices through time in any other frame moving relative to the first.

It's useful to think of "time dilation" and "Doppler effect" in terms of particular types of triangles on a spacetime diagram. (After all, many textbook problems in special relativity are really trigonometry problems using hyperbolic-trigonometry instead of the more familiar circular-trigonometry.)

Using graphics based on Bondi's from my article https://www.physicsforums.com/insights/relativity-using-bondi-k-calculus/ on the Bondi k-calculus (which uses the Doppler effect)... 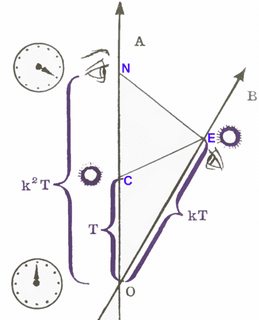 The ratio of these timelike legs $k=OE/OC$ is the Doppler factor.
OEN is also a Doppler effect. In fact, OEN and OCE are similar triangles in Minkowski spacetime geometry. [Bondi didn't draw the light signals CE and EN at 45-degrees.]
More generally, in $(1+1)$-Minkowski spacetime, the Doppler factor would involve a trapezoid with parallel lightlike edges, which cuts two timelike rays from a common event. (For instance, use a light-signal parallel to CE and use the intersections of CE with the observer worldlines instead of the degenerate signal OO.)
The Doppler factor $k=\exp\theta$, where $\theta$ is the rapidity (Minkwoski-angle) between inertial worldlines [drawn at event O]. 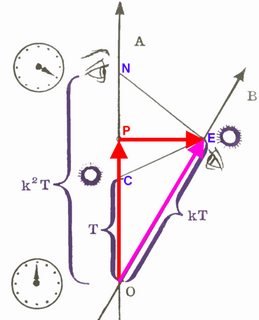 The ratio of these orthogonal legs $PE/OP$ is the spatial velocity of OE according to OP.
Thus, $v=\tanh\theta$.

Since Bondi didn't draw the light rays CE and EN along 45-degree angles, it's not obvious that $CP=PN$ (that is, P is the mid-point on CN) and $|CP|=|PN|=|PE|$, where CEN is a radar measurement.

From the Bondi k-calculus viewpoint,
since CEN is a radar measurement where inertial segment CN intersects the light cone of E,
the midpoint of CN (named P) is simultaneous with E, according to the observer along CN.
Thus, PE is Minkowski-orthogonal to CN (and to CP and to PN).

Not the answer you're looking for? Browse other questions tagged special-relativity time or ask your own question.

3
Dancing twins, one travelling in a rocket ship, looking through telescopes at each other
2
Why isn't time contraction a thing?
1
Doppler effect equation derivation

1
Time dilation in special relativity?
1
If there is no definite speed in the universe, only relative speeds, how does energy increase when velocity approaches the speed of light?
7
Question/Doubt about Time Dilation Symmetry in Special Relativity
2
How is time dilation consistent between both observer?
1
About time dilation, gravity, and motion
2
Can a system's orientation relative to direction of motion create additional relativistic effects?
0
Orientation of moving time clocks
1
Recordings of journey traveling near speed of light
1
Is length contraction and time dilation symmetrical between non-accelerating reference frames?
2
Length contraction looking at 2 moving objects in a frame