Feynman diagrams, can't Wick-rotate due to poles in first and third $p_0$ quadrants?

I have a confusion about relating general diagrams (involving multiple propagators) in Minkowski vs Euclidean signature, which presumably should be identical (up to terms which are explicitly involved in Wick-rotation). I'm confident the resolution to my issue is simple, as it's on quite a fundamental/elementary topic. Please, I would appreciate any help on this.

In Minkowski signature $(-,+++)$, the scalar Feynman (causal) propagator is given by:

In Euclidean signature (++++), the scalar propagator is given by:

It's easy to see that when $\Delta_{M,E}(k)$ are integrated over the $k_{0,4}$ variables, they are numerically equal, since one can continuously deform the contour in the Minkowski integral to obtain the Euclidean integral. I've even heard the Feynman diagram be called the "Euclidean" propagator, presumably for this very reason. This idea is illustrated in the picture below, which shows the $k_{0,4}$ integrals happening in their respective complex planes.

Now consider two momentum-space propagators multiplying each other, as one might naturally get in a loop diagram. In Minkowski signature this would look like

where $f(k)$ is some regular function of $k$ (i.e. no singularities). Note that in the $k_0$-integral we will have 4-poles, 2 for each propagator. The poles coming from the second propagator will be shifted by $p$.

The integrand again has 4 poles, but this time, because of $p$, the second propagator need not have poles symmetrically positioned on opposite sides of the imaginary axis. This prevents us from immediately Wick-rotating the Minkowski diagram into the Euclidean one. See the following picture.

So it seems the Euclidean answer will be wildly different than the Minkowski answer, but for a seemingly superficial reason. The fact that they will be wildly different can be seen by the fact that, assuming the $k_{0,4}$ integrals can be done by closing the contour in a half-plane and using residue theorem, pole-closing will give us different poles, when something tells me they should be the same. It seems that this is boiling down to the existence of poles in the first and third quadrants of in the $k_0$ Minkowski plane.

I am confident about the expressions I've given for Minkowski signature, (1) (2) and (5), as they are totally standard in ordinary QFT classes. Therefore I believe my error lies in Wick-rotation, in the Euclidean expressions. For example, we don't normally Wick-rotate (5) until we have already combined all the propagators via Feynman parameters. This makes sense, since after combining propagators we reduce our original $2N$ poles in the $k_0$ plane into $2$ poles each of order $N$. We can now continuously deform the contour to be parallel with the imaginary axis.

I finally found what seems to be the answer. QMechanic's answer solidifies this as paradox - the Euclidean and Minkowski Feynman integrals appear to give the exact same result, which we expect, but at the same time there is an unaccounted pole contribution which explicitly does not vanish, and this pole contribution precisely represents the difference between the Minkowski and Euclidean integrals. So they're equal... but not equal? What's going on?

This paradox was brought up nearly verbatim in a recent-ish paper$^1$ by Carlson & Freid (2017). [1] The authors found this tension in the context of calculating a certain loop-correction in both Euclidean and Minkowski signatures. There, the unaccounted pole-contribution (which this post is all about) gave rise to a crucial IR-divergence, which suggested that calculating the correlator in Euclidean signature may be invalid, or at least require greater care. What the author didn't seem to point out was that this issue is extremely general and would affect nearly every Euclidean loop calculation.

Just a couple months later, the issue was resolved in a paper by R. Briceño et al (2017). [2] Section 3 of this paper fully explains and resolves this issue. The upshot is the following:

I'll now explain the relevant points given in both of these papers.

Let's consider a simple theory of two scalars $\phi,\chi$ in $d=2$ dimensions. Let each scalar have non-zero pole-mass $m_\phi,m_\chi$, and let the interaction simply be:

Consider the one-loop contribution to the two-point function coming from a $\phi-\chi$ loop, as illustrated below. 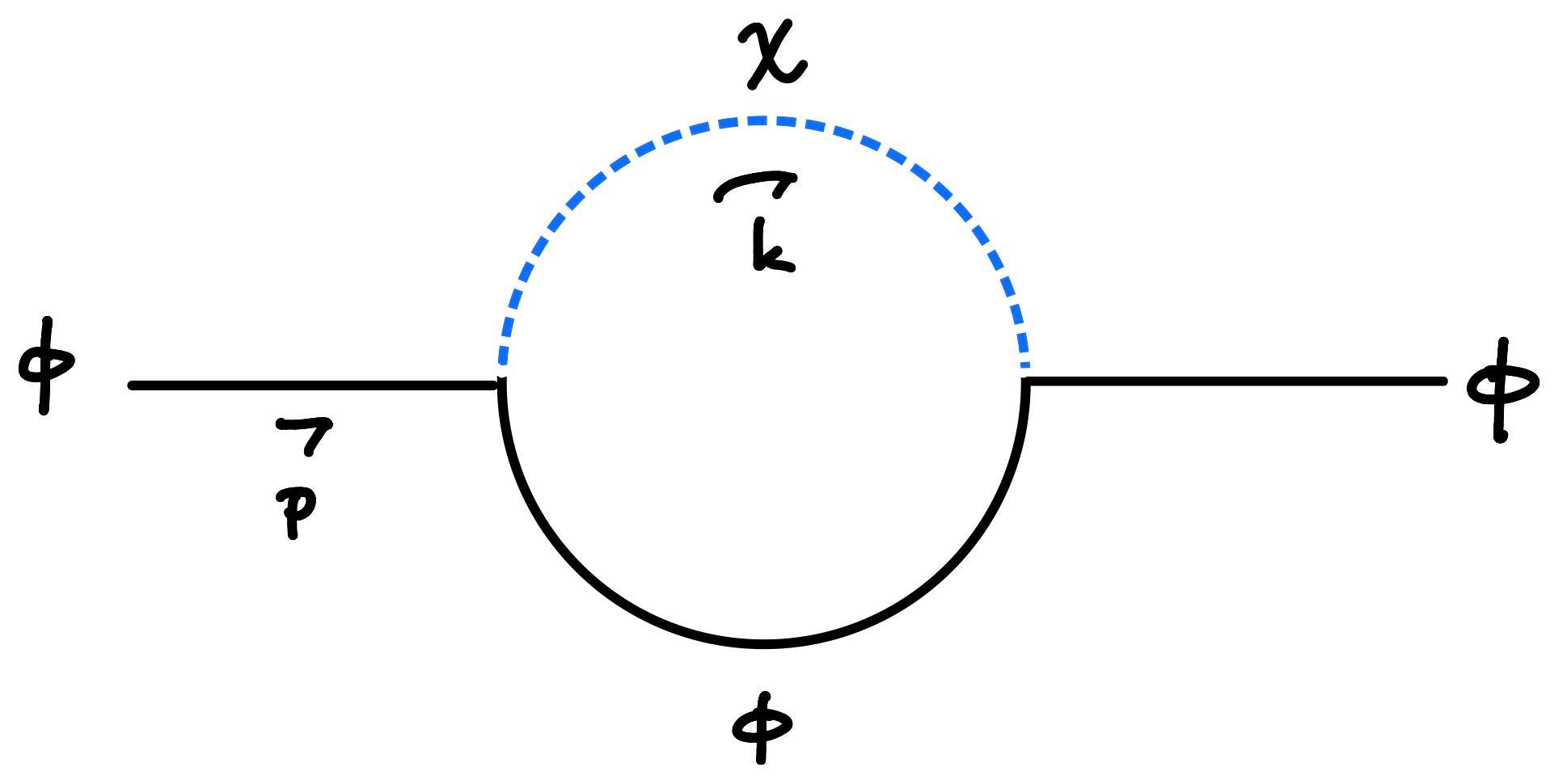 In Minkowski (mostly plus) signature, this (amputated) contribution is given by:

We can solve this integral using Feynman parameterization, but for transparency I'll evaluate each integral directly. Let's first fix $k_1$ and do the $k_0$ integral. In the complex $k_0$ plane we have 4 poles, just as in my original post above. They are 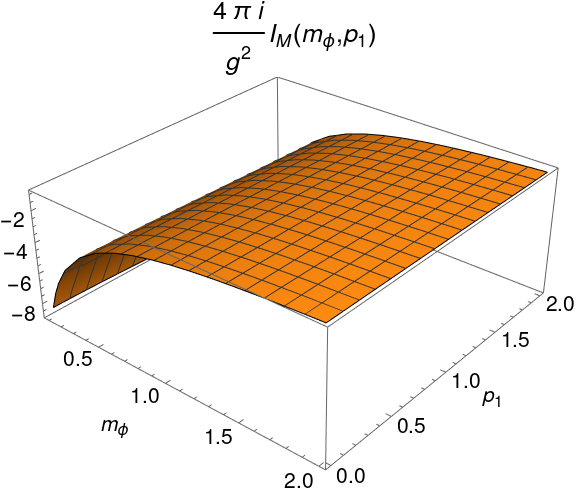 Naively, the same calculation in Euclidean signature would lead to the "Wick-rotated" integral $I_E$, with the $k_0$ contour running over the imaginary axis rather than the real axis.

where in the above expression all square-momenta are Euclidean, so $p_0=ip_2=i\omega_p^\phi$. However, we must remember that in $I_M$, for certain values of $k_1$ the pole $\tilde{k_0}^-$ will reside in the first quadrant.

In trying to smoothly deform (rotate CCW) the Minkowskian contour to the "Euclidean" one, we will encircle this pole in the first quadrant. The contribution from this pole will therefore give the difference between $I_M$ and $I_E$. The result is:

A plot of this difference is shown below. Again, $m_\chi=1$. 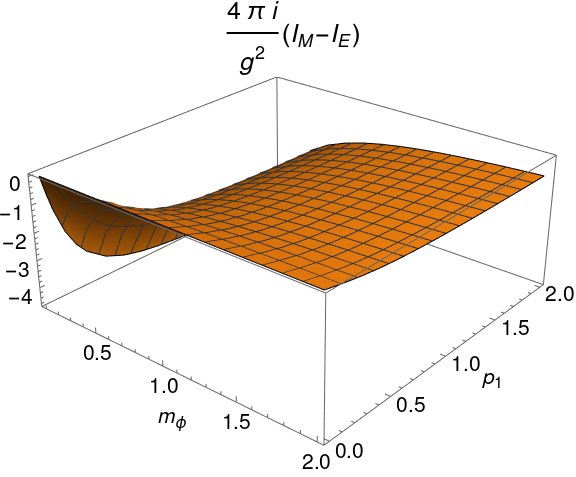 Note that it is not zero! Not only that, but it depends explicitly on $p_1$. Clearly, $I_E$ does not represent a physically relevant quantity.

But what about the analytical continuation, as in QMechanic's answer? Can we not regard $I_M(p_0)$ as analytic in $p_0$, and then analytically continue to the imaginary axis $p_0\rightarrow i p_2$? Can we not evaluate $I_M(p_0)$ and $I_E(p_0)$ in their respective ranges of validity, and then claim that since they agree over a certain domain in the complex $p_0$ plane, by analytic continuation they must agree everywhere?

The answer to both of these is a resounding no, as evidenced by the previous direct numerical calculations. I have directly calculated $I_M$ and $I_E$ at the physical point $p_0=\omega_{p}^\phi$, and they are finite but not equal.

The expression I calculated for $I_M(p_0)$ is valid for all real $p_0$. We could have equally calculated via Feynman parameterization, and obtained $I_M(p_0)$ for real $p_0$. However if we did the same calculation via Feynman parameterization for $I_E(p_0)$, it would only be valid for imaginary $p_0$, as in QMechanic's answer. The intersection of these two domains of validity is the single point $p_0=ip_2=0$. Analytic continuation from one domain to another would require agreement of the two functions over at least an accumulation point in the complex $p_0$ plane. We do not have that, and therefore we cannot justify analytic continuation.

Let's consider the quantum theory in the Heisenberg picture. From a Hamiltonian perspective, assuming a time-independent Hamiltonian for scalar particles, the only difference between the Euclidean and Minkowski theories is through the time evolution of operators.

where $t=-i\tau$. The instantaneous Hamiltonian is the same in both signatures, ergo so is the spectrum. If we thus ask for a correlator which has no explicit time dependence, the result should be exactly the same in both theories. For example, in the two-scalar theory from earlier, $\phi,\phi$ overlap:

should be the same in both signatures, as there is no time-dependence whatsoever involved. Of course, this matrix element is sort of trivial, since by assumption it gives a delta-function, but this is the matrix element which we use to renormalize the kinetic Lagrangian (by demanding triviality).

In Minkowski signature, we calculate overlap amplitudes such as (11) via the LSZ prescription.

Note that it is for (12) that we use standard momentum-space Feynman rules. It is precisely with this that, in Minkowski signature, we get $I_M$ as in (2), after amputating external propagators of course via the LSZ prescription (11). More importantly, if we calculated this quantity in Euclidean signature, we would indeed get $I_E$ as in (7).

However LSZ is not applicable in Euclidean signature - in fact it doesn't even make sense. The desired matrix element can be accessed through a different prescription. Consider the following Euclidean-time dependent propagator.

On the one hand, we can use the delta-function identity

On the other hand, we may insert the identity operator twice into (14), and extract the Euclidean time dependence via (10).

where $E,E'>\omega_p$ are multi-particle-state energies which are necessarily greater than that of the relevant single-particle state$^2$. To extract the desired matrix element, we pick out the leading exponential dependence. Putting this together with (16) gives us:

This is the Euclidean prescription, which is to be compared with the Minkowski LSZ prescription (12). For a particular Feynman diagram, the prescription is as follows:

If one carries out this procedure for the Euclidean diagram in section 1 which contributed to $\langle \phi(P)\phi(-P)\rangle$, one will find two terms. The first will be $I_E$, and the second will exactly be $\Delta I$ as found in (9). I will not carry out this explicit calculation, but you can see it in section 3 of [2].

And thus, the paradox is resolved. :)

$^1$ The bullet $\bullet$ in the integration measure indicates the position the spacetime index. The Minkowski sign convention is $(-,+,+,+)$.

Not the answer you're looking for? Browse other questions tagged quantum-field-theory propagator wick-rotation analyticity or ask your own question.