Where do pions get angular momentum from?

If a neutral meson carrying intrinsic spin equal to 1 decays into a pair of charged pions, how can they possibly conserve angular momentum? Pions have no spin and if they originate from the same point then their relative motion can't generate angular momentum either.

Won't they just go their separate ways? How can there be orbital angular momentum between them? 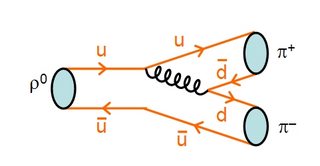 This is an indicative first-order Feynman diagram for this decay .

Pions have no spin and if they originate from the same point then their relative motion can't generate angular momentum either.

It is a quantum mechanical reaction. As you see, the two pions do not originate from the same point. In general, in Feynman diagrams, the vertices are only out of three lines and one of them is the outgoing one.

This leaves leeway for orbital angular momentum to exist between them, when the final two pions are described in terms of a wave function, which will carry the spin 1 of the rho by conservation of angular momentum.

Not the answer you're looking for? Browse other questions tagged particle-physics angular-momentum quantum-spin standard-model pions or ask your own question.

2
Kaon decay parity if pion parity is redefined as +1