Origin of the thrust force in jet engine

I am reading a lot about the jet engine operation and I meet mostly explenation that the thrust is generated thanks to the exhaust nozzle that "accelerates" the air. However the nozzle performs no work so it should't change the speed of the flow. The way I think about this is that the air is forced to accelerate through the nozzle at expense of its pressure. Moreover the nozzle feels the reward force which makes sense. This is somehowe paradoxal.

The net thrust comes from the pressure forces on the engine. How does the nozzle influence the pressure inside the combustion chamber? What would happen if there was no nozzle? 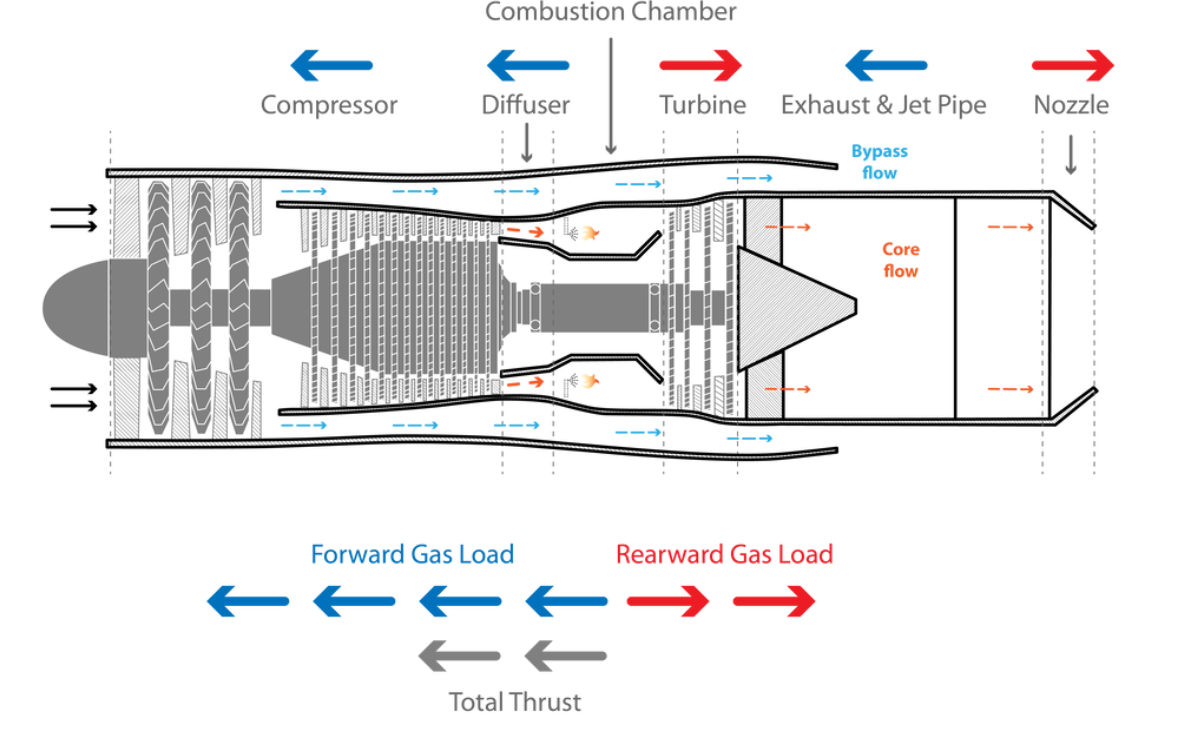 To complement Philip Wood's answer, I would say that if there was no nozzle, it would ultimately allow the exhaust gases to exit the engine more easily, as there is no constriction, meaning a lower pressure in the engine. The nozzle is essentially a constriction in the flow through the engine which results in a higher engine pressure for the same mass flow rate. Therefore you will get a higher pressure force against the back wall of the combustor. In addition, the higher pressure force is reflected in a higher momentum flow rate. Try and think about what happens when you squeeze a garden hose at the end, where the water exits, assuming the mass flow rate of water remains constant.

The compressor is pulling air into the jet engine from the outside, creating a change in momentum in that air mass, which creates thrust. However, this thrust is too small to be useful.

Have you ever turned on a garden hose with an adjustable nozzle attached? If you leave the hose on the ground with the nozzle in the wide open position and turn on the tap, the water will flow out of the hose at a slow rate with no perceptible recoil. If you adjust the nozzle so it constricts the flow to some extent, the hose will move about under the effect of the recoil from the water being emitted. The difference between the two arrangements is that when the nozzle constricts the flow, the water is forced out at a much higher speed.

A jet engine works on the same principle. The recoil (or thrust) depends in part upon the speed of the gases ejected from the rear of the engine. That in turn depends upon the degree to which the speed of the gasses is increased by the constraining effect of the nozzle. The engine is capable of propelling a given volume of gas backwards every second- if you narrow the opening through which the gases must pass, you force the gas to move at a higher speed, thus increasing the recoil imparted to the engine. If you had no nozzle, the gases would be ejected by the engine at a lower speed and thus the recoil would be reduced.

The nozzle often has a narrower cross-sectional area than the average cross-section of the engine. We can apply the rocket propulsion equation since jet engines or rockets work on the same principle of momentum conservation:

so clearly in the equation, we can see $v\propto u$, so if we increase gas velocity we increase our rocket/engine velocity. Now gas flowing is fluid, so we can apply the law of continuity: $$A_1v_1=A_2v_2$$, so, if we decrease the cross-sectional area of the nozzle if we increase our gas velocity, which was our requirement. However the material will be subjected to high stresses due to the high velocity of the gas, so we don't make it too narrow.

The location where thrust is created in a jet engine heavily depends on flight Mach number. While in the static case it is mainly the nozzle, at supersonic speed more than half the thrust comes from the intake. Key to understanding thrust generation is the knowledge about the pressures and speeds along the path of air through the jet engine.

According to Bernoulli's law, pressure is equivalent to potential energy while speed is equivalent to kinetic energy. Now you will say that Bernoulli does not apply for the flow inside a jet engine, and that is partially correct. As soon as external work is done on or by the fluid, Bernoulli does not apply. But in between, when pressure is converted to speed or vice versa, his law explains well what goes on.

Now have a look at a supersonic intake: It slows down the oncoming flow via a cascade of steepening shocks (or a simple, straight shock in pitot intakes) such that speed inside the intake becomes subsonic. In order to keep the rotating turbomachinery in fully subsonic flow, the intake now widens past the intake face in order to slow down the air to about Mach 0.4. (In the Concorde intakes, even at a flight speed of Mach 2, the flow speed at the first compressor stage was Mach 0.38). This widening flow channel has a larger exit and a smaller entry area. If you now integrate the pressure component in the direction of flight over the intake wall area, this area and pressure difference translates into substantial thrust.

Of course, the whole intake-generated thrust would not work if it weren't for the jet engine which sucks all that incoming air in. Now work is added at each compressor stage so pressure increases while flow speed is roughly constant. After the last compressor stage, the diffusor decelerates the compressed air again, adding a bit of thrust, such that the air will not blow out the flame inside the combustion chamber. Burning the fuel greatly reduces density and increases flow speed while pressure remains almost constant (save for some pressure drop due the Rayleigh effect). This increases the kinetic energy of the flow without affecting potential energy much. Also, what happens in the combustion chamber has not much effect on thrust.

In the turbine the opposite happens to what happened in the compressor: The flow does work on the turbine and keeps it spinning, thereby losing pressure. The pressure that remains is converted into speed in the nozzle. This is the second large source of thrust, similar to a rocket: The area ahead of the nozzle is larger than the backward-facing area inside the nozzle, so this pressure pushes the jet engine forward.

In the static case, the intake and compressor have to accelerate the air, so they produce a bit of drag. Now, in the nozzle, the remaining pressure is converted into speed and since the flow is fully subsonic, this is done in a converging flow. On the other hand, if an afterburner is involved, the exit speed becomes supersonic and thrust is maximized by using a convergent-divergent nozzle which adds a lot of thrust in that divergent section.

Not the answer you're looking for? Browse other questions tagged aerodynamics rocket-science heat-engine aircraft propulsion or ask your own question.

3
Can exhaust gases be diverted to other cylinders during engine operation?
1
How does gas spin the turbine in a jet engine?
2
Combustion Chamber Pressure
0
Ion Wind Thruster? What is the theory behind it?
0
How does pressure become velocity in a jet engine axial turbine?
0
Comparing a gas turbine (Joule cycle) to the Carnot cycle?