Recall that intrinsic impedance is given by $$\eta = \sqrt{\frac{j\omega\mu}{\sigma+j\omega\varepsilon}}$$So if $\sigma=0$, then $$\eta = \sqrt{\frac{j\omega\mu}{j\omega\varepsilon}} = \sqrt{\frac{\mu}{\varepsilon}}$$This means that the intrinsic impedances $\eta_1$ and $\eta_2$ are real numbers (with units) since $\sigma_1=\sigma_2=0$ S/m and $\mu$ and $\varepsilon$ are taken to be just real constants (with units), i.e. they do not change with space or time, except at $z=0$ where there is a transition from one lossless dielectric to another of course.

With this background, here is what I do not understand.

To determine the magnitude of this, it may be helpful to consider the geometry of this situation by using a phasor diagram. The phasor diagram would plot two vectors (phasors) – one of magnitude $E_{i0}$ and the other of magnitude $\Gamma E_{i0}$ (remember $\Gamma>0$ in this case but $0\le\left|\Gamma\right|\le 1$ holds in general). If the reference phasor is $\cos\left(\beta_1 z\right)$, then $\cos\left(\beta_1 z-\omega t\right)$ will be located a certain distance in the clockwise direction away from the reference and $\cos\left(\beta_1 z\right)$ will be located the same distance in the counterclockwise direction. The resulting vector (or phasor) sum of the two will have a magnitude of $\sqrt{E_{i0}^2 + \left(\Gamma E_{i0}\right)^2}$. I am trying to figure out the phase angle for this resulting vector. I am currently stuck here, hoping someone can help me out. Thanks in advance!

EDIT: Here's the picture I drew. 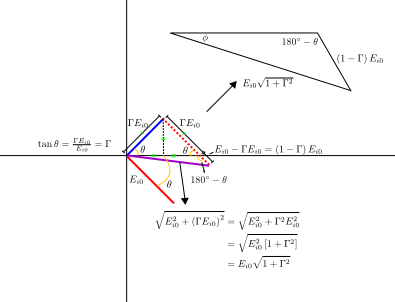 It seems like this all simplifies to finding $\phi$ using the law of sines / law of cosines. The goal is to see for what values of $\phi$ will $\left|\vec{E}_1\right|$ be maximum. Hopefully, it'll end up validating what the book says.

Your notation is quite confusing, so let me reformulate and partly simplify your problem. If my reformulation/simplification is wrong... Well, tough luck...

No such thing as a lossless dielectric. This violates causality by Kramers-Kronig. I can easily measure the loss in monocrystalline quartz, teflon, mono-layer graphene, you name it. Well, OK, there is one. Vacuum.

Not the answer you're looking for? Browse other questions tagged electromagnetism waves vectors calculus superposition or ask your own question.

2
Determining the phase delay between H and E fields
6
Transmitted Power and Poynting's theorem contradiction?
0
Electromagnetic wave equation with time varying phase velocity
0
Not physical result from the presence of surface charge density between dielectrics
0
Reflection of Electromagnetic wave
2
Non-standing waves on string
1
Why it is necessary that phase of incident, reflected and refracted wave must equal at the interface of two medium?