Is my boss wrong about our mechanical advantage from our pulley system?

I work on a drilling rig as a roughneck and we had a lecture today (at the office) about mechanical advantage in pulley systems. Now, I know that my boss is well educated in oil drilling, but my instincts tell me that he may have this one wrong.

A drilling rig works sort of like a crane in that it has a tall structure supporting a pulley system. There is a large winch permanently installed on the base platform and then it goes over the top of the structure (the crown of the derrick) and down through a floating sheave--this has a few wraps to give us more mechanical advantage. I am including pictures to help describe the situation. 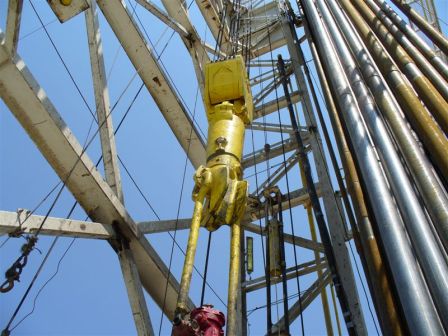 Here the picture shows the floating sheave (the blocks) which we use to do most all of our operations. Most importantly, we use it to pick up our string of pipe that is in the ground.

As seen in this picture, the blocks hold the weight of the string of pipe. Now he told us that if the pipe get stuck in the hole (maybe it snags something or the hole caves in), that we lose all of our mechanical advantage. He said that is why the weight indicator will shoot up and go back down after it is freed. He said that because when the pipe is snagged in the hole then we are not dealing with a free floating sheave anymore and that is what is required to have a mechanical advantage.

If I understand correctly, then I believe you’re right. We are considering a situation where the drill pipe in the ground gets stuck, but where all the rest of the equipment is functioning properly, right? In particular, we are assuming that the blocks are not jammed or anything.

The proper way to define mechanical advantage $M$ is as the ratio between the distance $D$ traveled by the driving force and the distance $L$ traveled by the load. Then $D$ is just the length of cable that passes through the driving winch at the base during a certain amount time, and $L$ is the height that the drill pipe moves during the same time. This ratio is equal to the inverse of the ratio of the tension $T_D$ on the cable at the winch and the tension $T_L$ on the cable attached to the drill pipe:

This ensures that the amount of work done by the winch, $T_D D$, is equal to the work done on the pipe, $T_L L$.

To summarize: the ratio between $D$ and $L$ is not affected by the pipe jamming; it’s just that it becomes more difficult to get them to move at all. Therefore, the mechanical advantage $M=D/L$ doesn’t change

I’m not sure that this is feasible, but you could confirm this by measuring the tensions at the winch and at the pipe individually.

A constraint on the load which prevents it from being lifted does not change the mechanical advantage of the machine. It just makes the load look more heavy, since the constraint supplies large amounts of opposite and equal force to keep the load in place, until it is overcome and the load gives way.

For example, in this diagram, the floating pulley is the basis for a mechanical advantage regardless of the load being bolted down. It will take half the force to break the bolts than by pulling directly. 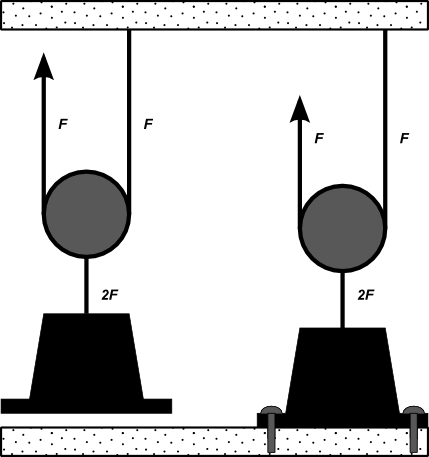 It is not a general theorem that adding constraints to a system does not change the mechanical advantage.

Consider certain kinds of transmissions, such as automatic transmissions based on planet gears, where friction bands are used to constrain various shafts from being able to rotate relative to the casing. This has the effect of changing the gear ratio, thus the mechanical advantage.

Your boss's general intuition that constraining something might change the mechanical advantage is not wrong in general; it just does not apply in this case. Perhaps your boss has experience with another system where that was the case, like bicycle hub gears.

What's special here is that it is the load which is being constrained. Although this also constrains the floating pulley from moving, that pulley is tied to the load and effectively part of it. It is not some free part in the machine. It could be the case that certain kinds of pulleys which do not move with a load might be constrained, and this will change the machine.

For instance, in the following two diagrams, the difference is that the central pulley is constrained to the overhead support, versus to the load itself.

In this diagram, the mechanical advantage is four-fold: 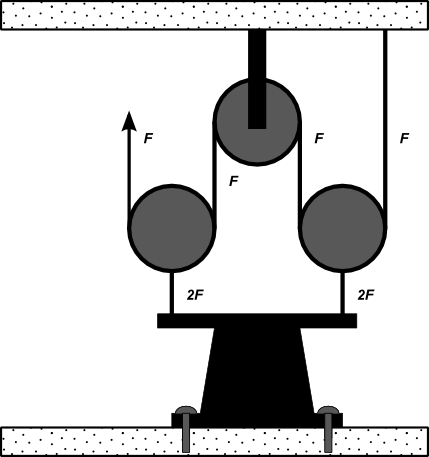 But in this one, the advantage is the same as with one floating pulley: an extra pulley that is connected to the load is useless. The two cable supports pull with 2F each, but there is a 2F compressive stress in the pulley member, so the net is just 2F. 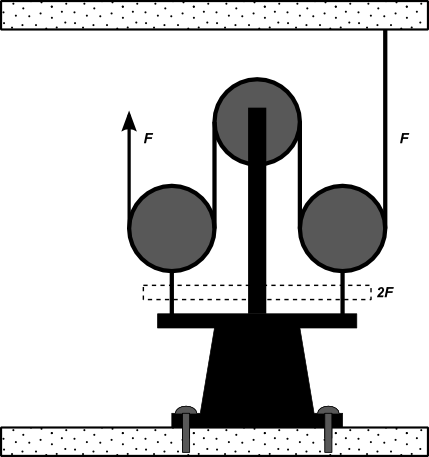 Therefore, we cannot simply dismiss the boss' overall intuition. Constraining pulleys from moving in various ways can make a difference. The boss is thinking about it too deeply, and not recognizing the simple case.

You're right and your boss is wrong.

The weight indicator goes up because the draw works has to apply more force to free the stuck pipe, using the same mechanical advantage.

You now need to go to work place stack exchange and ask the question:

How can I explain to my boss that he's wrong in a diplomatic sort of way?

As a crane operator since 1972 I work a lot with pulleys blocks and you are a 100% right, looks like you are rig with 6 parts lines which multiplies by six the line pull of the winch.

You are right. The simple way to understand mechanical advantage with pulleys is to count the number of ropes that "come out" of a particular block. With the same tension on each of the ropes, the total force is just the tension in each rope times the number of ropes. 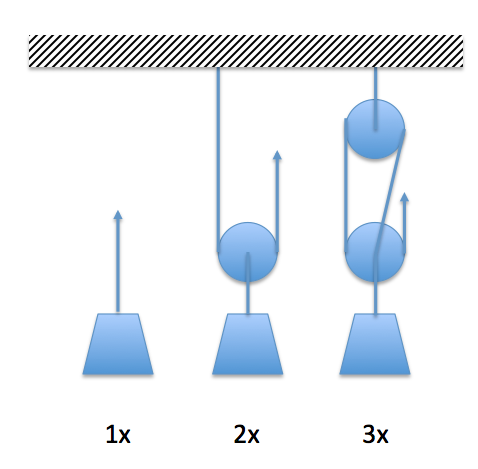 Whether the weight at the bottom is fixed or moving does NOT change the mechanical advantage (the balance of forces).

To put it simple let's say the pipe is 1 ton and you have a 4 to 1 then your lifting 1/4 ton, if the pipe was 2 ton you would be lifting 1/2 ton, although heavier you still have a 4 to 1 pull so will need more power to lift it. So no matter the weight or strain it remains 4 to 1 advantage.