Would it be possible to have a stable atom nucleus that is hollow?

Some context around my understanding:

Protons and neutrons clump together in the core of the atom due to the strong nuclear force.

Protons also repel each other, but the strength of this is not strong enough to overcome the strong nuclear force.

Because the strong nuclear force's range is limited, larger atoms become radioactive as the protons repel each other, undergoing fission.

My question is whether it would be possible for an "atom" to exist in a stable configuration with a hollow nucleus.

What I mean by this, is a spherical object, where the protons and neutrons are on the outside of the sphere, but the inside is hollow. Kind of like a ping pong ball.

Strong nuclear force would cause the neighboring protons and neutrons to attract towards the center, but the protons on opposing sides of the sphere would repel.

This should create a force that causes the "ball" or sphere to be pushed outwards. (but with the strong nuclear force to keep them from going too far outwards. 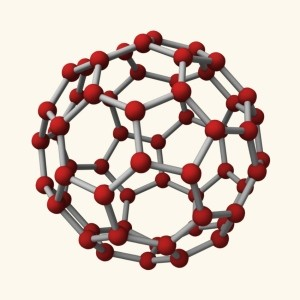 Similar to this kind of structure, but with many more protons, neutrons and a larger diameter. Surely there would exist some kind of stable structure at a given ratio of neutrons, & protons

I couldn't find any information around this, but would love to hear opinions.

I can't prove it, but I expect such construct to be very unstable. Strong force exponentially decreases with distance between nucleons : $$F_{strong} \propto \frac {1}{r e^r}$$ So as it is pictured now, inside of structure strong force would be minuscule, and electrostatic repelling force between protons would win in effect making this "bubble" going to expand. Unless strong force between nucleons in lattice vertexes is high enough and uniform enough to compensate this outer push.

If for some reason, uniformity of strong force distribution along surface nucleons is broken (field fluctuations, etc), there would arise sort of "holes" in structure which would make such hollow sphere to collapse (same as ordinary soap bubbles collapses) into clumps of nucleons. Some of them which fly apart, analogous to the process of radioactive atom decay.

Not the answer you're looking for? Browse other questions tagged nuclear-physics radioactivity or ask your own question.

7
How would nucleosynthesis be different if the neutron were stable?
4
Proton-Neutron Lattice as a form of matter?
5
Coulomb barrier and proton evaporation
8
Evidence that nuclei contain neutrons and protons (other than nucleons appearing if a nucleus is smashed)?
6
Can a nucleus (made of neutrons) exist without an EM field?
1
Is the arrangement of nucleons within a nucleus identical between heavy elements of the same type?
3
Why are lighter nuclei dominated by $\beta$-decay and heavier ones by $\alpha$-decay?