The well-known Einstein's thought experiment involves two clocks consisting of a set of mirror reflecting light back and forth — one of the clock is stationary relative to the other, and according to the stationary clock, the one moving with constant velocity would be experiencing a time dilation. This is because the first postulate of special relativity says speed of light is constant, and so in order to compensate for the extra horizontal distance covered by the moving clock, its time must be increased ($v=c=\tfrac{\Delta x}{\Delta t}$).

Now what happens if one of the clock is now accelerating? I couldn't get the math to work out; does time dilation apply the same way with a non-inertial body?

Firstly we should note that this is not the way time dilation is calculated in relativity. The example of the light clock is used in introductory courses because it's easy for students starting out in relativity to understand, but a full analysis is more complicated. If you are interested the full calculation is discussed in What is time dilation really? though you may find this hard going.

But despite the above caution you can adapt the light clock experiment to understand accelerated motion. You just need to make the clocks infinitely small.

So as we reduce the size of the clock we eventually reach the stage where the time the light takes to travel between the mirrors is so small that the change in the velocity during this time is negligible. Then we find the time dilation just depends on this (approximately constant) velocity exactly as it does for the non-accelerating clocks.

Since we can in principle make the clocks arbitrarily small we can make this result arbitrarily precise, and our conclusion is that the time dilation depends only on the instantaneous velocity and not on the acceleration. This result is known as the clock hypothesis.

This is because the first postulate of special relativity says speed of light is constant, and so in order to compensate for the extra horizontal distance covered by the moving clock, its time must be increased...

That is partially incorrect in SR. There is no extra distance covered by a moving object, as surrounding space is viewed within its own frame of reference but to the contrary, less travelling distance is covered due to Lorentz space length contraction therefore this is combined with a slower rate of time thus time dilation, as perceived by an external inertial observer so that the speed of light $c$ remains the same for all observers independent frame of reference. As space shrinks in the direction of motion for a constant speed moving object or observer, time must expand for the external inertial observer to keep light speed $c$ constant. This is due to the transverse propagation of light (information) coming from a longitudinal moving object. Space increases for light the faster the moving object, which shrinks more space in its line of motion and increases the curvature of spacetime. Therefore an external inertial observer will see the object travelling for a longer time reaching its destination. 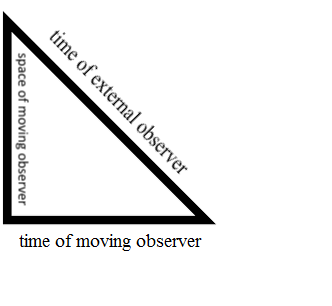 The above is for constant speed Special Relativity theory SR.

79
What is time dilation really?