Why would magnetic monopoles not violate the law of conservation of energy?

The field lines around a magnetic dipole are continuous unending loops. If magnetic monopoles were to exist, we could limit the path of a monopole along one of these field lines where it will continue to accelerate and in theory and provide free energy.

Although there are few other cases where we can establish circular electric or magnetic fields (eg, induced electric field along changing magnetic field or straight current carrying wire) but in those cases the set-up already requires some work to be done on it to be functional. However in this case no work has to be done. 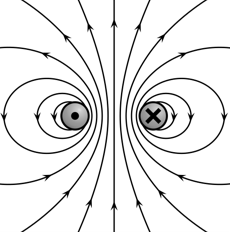 Since there are many physicists who believe that magnetic monopoles could exist in nature, what is wrong in this argument?

Since the magnetic monopole acquires a significant amount of energy, you cannot just treat it like a (magnetic) test charge that moves passively on and on in the supposedly constant solenoidal magnetic field. Only the whole system encompassing the solenoidal magnetic field, the electric current that creates it, the moving monopole and finally the solenoidal electric field that will be generated by it, must obey energy conservation.

The situation is easier to understand, if you take an infinite straight line current as the generator of the original magnetic field. Then the magnetic flux density at a distance $r$ from the line current has constant magnitude and its field lines are strictly circular.

Now place a cylindrical shell of magnetic monopoles around the electric line current at radius $r$. Then these monopoles will start moving circularly around the line. By symmetry of Maxwell's equations with magnetic monopoles, these circularly moving monopoles are similar to an infinitely long "coil" in electrical engineering, and hence, will generate a homogeneous electric field inside of them, which is then, of course, directed in parallel to the electric line current that generated the original magnetic field. Hence, this additional electric field will decelerate the line current and weaken the magnetic field, which in turn leads to attenuated acceleration of the magnetic monopole shell.

When you take this simple example to your non-ideal magnetic dipole field and a magnetic point charge instead of a shell, only the details get more complicated, while the principles stay the same.

Basically, this is all pretty similar to Lenz' rule in classical electrodynamics, only adding magnetic monopoles: the effect of induction (when applied to magnetic monopoles) counteracts its cause and so makes sure that energy is conserved.

Additional note: be aware of the fact that classical electrodynamics (i.e. without magnetic monopoles) also allows closed electric field lines. Although these only occur during radiation, they principally exist for a certain duration. If your argument were true, you could also apply it to closed electric field lines, and so energy conservation would be violated already for Maxwell's theory. But of course, energy is also conserved there, again because of the "test charge" acting back on the "external field".

Not the answer you're looking for? Browse other questions tagged electromagnetism energy-conservation dipole magnetic-monopoles or ask your own question.