Does a car consume more fuel when it's raining?

Yesterday my wife asked me that question, and I couldn't answer.

Consider a car, in a sunny day, and that is consumes x gallons per mile. Considering that everything is equal, except that it's traveling in a rainy day, but at the same temperature as the sunny day so that air density is the same.

Will the lower friction of the tires make it consume more or less fuel? And the fact that rain drops are falling over and in front of it ?

I answered that it'll consume more fuel, since friction is what makes car move and that the rain will act against it... but I'm not sure ?

There is an additional loss of energy when driving through puddles on a wet road, because the tire treads have to exert work in order to eject water. One way to look at it is that the keeps trying to glide on top of the water, but is continuously sinking into it to meet the pavement, which is equivalent to driving slightly uphill. 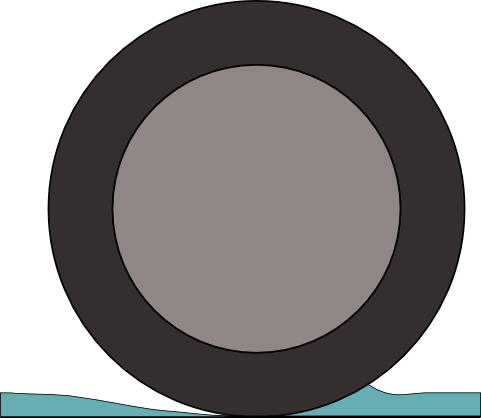 Friction is indeed necessary for a car to push off the ground. However, it does not matter how much friction there is so long as your tires are not skidding. You only waste fuel if you put energy into spinning the wheels that is dissipated as heat before ever contributing to the car's motion. Otherwise, Newton's third law holds and the ground pushes you forward as much as you push back. So as long as you're not one of those drivers who keeps hitting the gas in thin puddles and hydroplaning, there shouldn't be much of a difference.

Of course, in order to keep from skidding you may very well have to travel slower, which can itself impact your efficiency (and is probably the dominant effect here - see this related question).

Addendum: There are many other factors worth considering, many of which have more interesting and complicated physics than the simple stuff I felt like analyzing. Kyle points out in a comment that water can be adhesive, so it can be harder to drive through (this is a less extreme example of driving through tar). Displacing water also costs something, as noted in an answer by kaz. Both of these are probably larger effects than increasing the effective air mass. Frank Presencia Fandos's answer mentions an even larger concern, engine efficiency based on airflow (and readiness to participate in combustion), which is an engineering problem too complicated for a physicist like me. OSE's comment also points out an implicit assumption I made above that should be said explicitly: I'm comparing $100\%$ humidity weather with and without rain. If you want to compare to dry weather, the effect goes the other way, mainly because a molecule of nitrogen is more massive than a molecule of water.

In the end, though, I'm willing to bet the biggest effect is still the fact that most drivers slow down in heavy rain, since fuel efficiency is highly dependent on speed.

I would like to consider just one aspect of this question. I am not sure that, as Chris White put it, "it does not matter how much friction there is so long as your tires are not skidding." The coefficient of rolling friction does depend on the surface, so I guess it is somewhat different in rain. I guess rolling friction losses are somewhat important (http://www.consumerenergycenter.org/transportation/consumer_tips/vehicle_energy_losses.html ), even for driving wheels.

I would say yes, I'm in a hurry, but these are the 2 main reasons I can say right now:

Driving through standing water takes a lot of energy and wants to slow the car down, so to maintain same speed as on a dry surface, you require more fuel, i.e. your mpg will drop. I have instant reading mpg on my BMW 335D and have noticed what would other wise be 30mpg on dry surface can drop to 25 or loess on wet surface. I'm talk surfaces with pooling water, not just wet.

Not the answer you're looking for? Browse other questions tagged friction everyday-life popular-science or ask your own question.

7
Simple friction formula for a car

2
Does ABS cause a force that resists turning a car into a corner?
0
static friction problem without mass
1
What are the optimal conditions to fuel your car?
4
Is it more efficient to drive fast uphill?
0
Is rolling friction enough to make a car turn?
1
Does Angular Momentum from the engine of a car affect said cars ability to corner?
0
Will car burn same amount of fuel with equal acceleration $(ΔV)$ but at different speeds if resistance forces don't exist?