If diverging rays never meet, why do parallel rays meet at infinity?

I've seen that in the case of concave mirrors if the object is between focus and the pole - the reflected rays diverge and never meet. 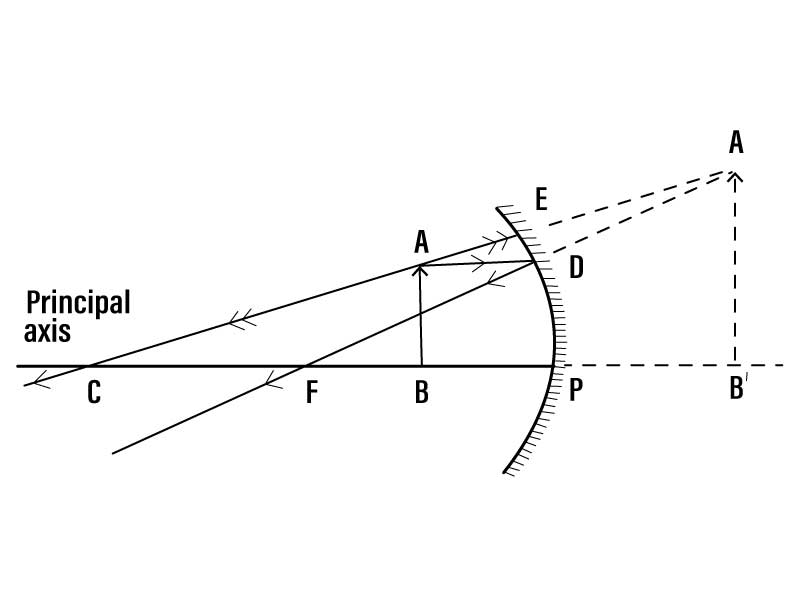 But if the object is at the focus, it's defined to be meeting at infinity. Why is it so? 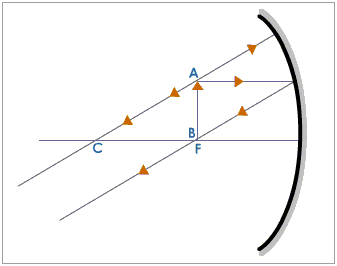 If you align your viewing direction parallel to some set of parallel lines, you will visually see them ending at some "point" at infinite distance. The typical example is railroad tracks. 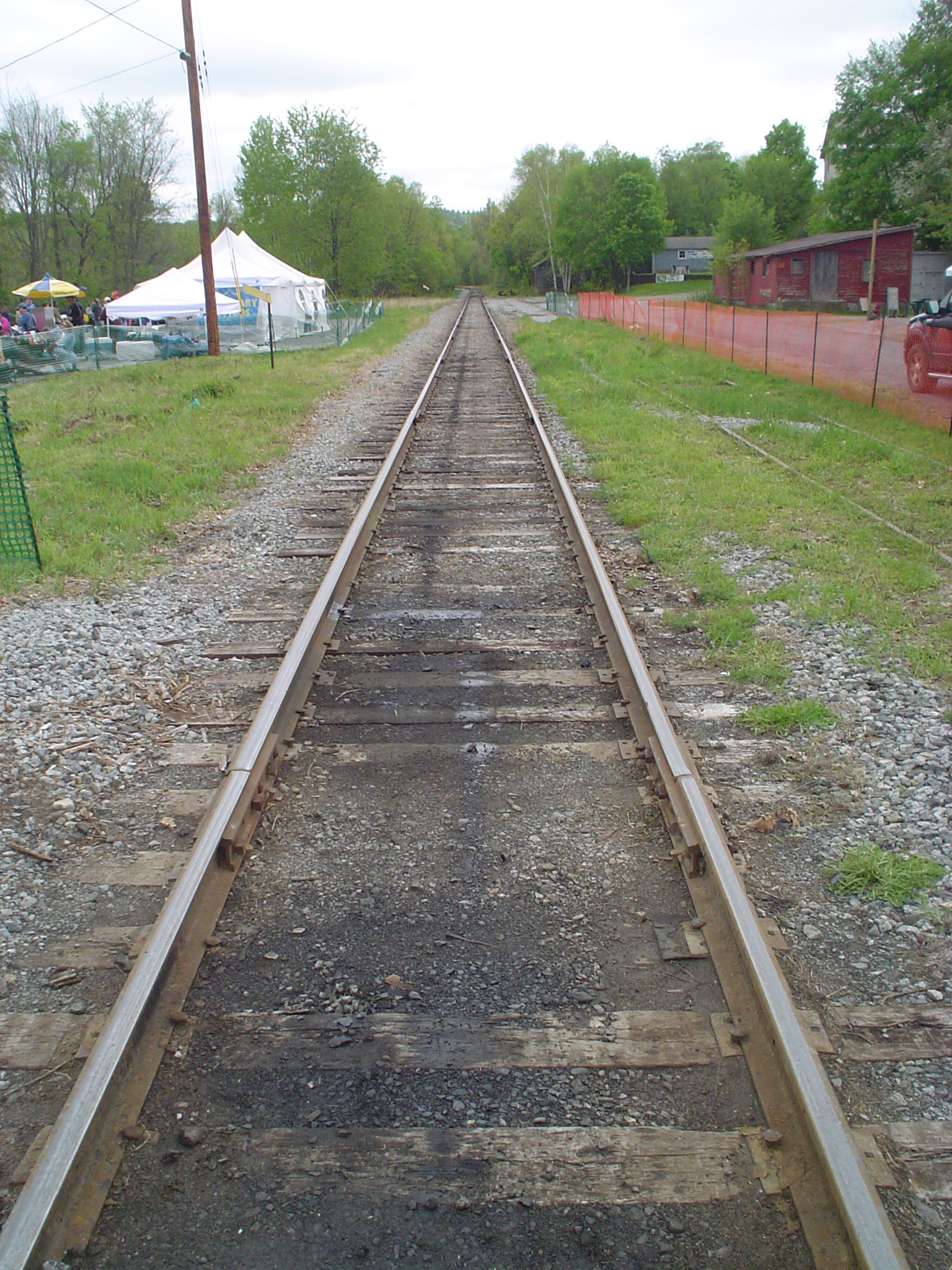 If you take lines that are not parallel, then no matter what perspective you take, the visual point of intersection (if there is one) will always be a finite distance away, and thus not at infinity. E.g. the pole in the image is skew to the rails of the track, so no matter how you orient your view they will never appear to intersect at all, whether at infinity or not. Or take the rails and the wooden rail ties. They make right angles at points in real space, and no matter how you orient yourself you can never make them appear to intersect anywhere but at those points. Non-parallel lines are defined not to meet at infinity because our vision tells us they don't meet at infinity.

Also note that there are different points at infinity. The point at infinity at which the railroad tracks intersect is visually different from the one at which all the vertical lines in this photo intersect. And both are different from the one at which the horizontal wooden ties intersect. This is in disagreement with @nu's answer. This is because there are many ways to mathematically construct points at infinity given a suitable definition of "real space". My definition corresponds to projective space, instead of a one-point compactification.

Infinity is not a real distance or an actual number. It's used in mathematics when describing limits as a parameter increases without bound.

Parallel lines, by definition, never actually meet in a flat plane (there are non-Euclidean geometries where they do meet, and these are relevant when General Relativity is taken into effect, but not for classical physics of light rays -- we can approximate space as a flat plane).

In the mathematics, you'll have an equation with the angle in the denominator of a fraction. Dividing by 0 has no actual meaning in arithmetic, so that's why we use limits to deal with it.

In Euclidean geometry, parallel lines never meet. This is the very definition of parallel. So if the object is at the focus, the reflected rays indeed will never meet (in an ideal Euclidean world).

So why do we say they "meet at infinity"?

It turns out, it's just a notational convention. To borrow from another answer of mine:

When physicists say something "goes to infinity", what they mean is "as you take the limit, this value gets bigger and bigger without any bound, and will eventually exceed any number you choose".

In the standard system of real numbers (which is used for most things in classical physics), infinity isn't actually a number; it's more like a notational shorthand. So a more technically accurate way to say this would be:

"The rays meet at infinity" is just shorthand for this.

The fact that parallel lines meet at infinity becomes quite intuitive when thinking about what "infinity" actually means in a 2d plane. While the real numbers $\mathbb R$ are often compactified using two points, namely $+\infty$ and $-\infty$, to preserve their ordering in the compactification, in 2 dimensions, ordering does not make much sense (is $(2,1) > (1,2)$?), and a different compactification (the Alexandroff one-point compactification) is common, which only adds a single point, $\infty$.

This compactification can be pictured as follows:

Using this definition of infinity, it is clear that any two parallel lines both contain the single point $\infty$ and thus meet there.

Edit: Because the OP suggested the answer is too complicated, here are some additional explanations:

"Infinity" here is actually a shortcut for saying "grows larger than any value you can name when the conditions approach condition X"; that is, it describes the behavior of an iterative procedure or an algorithm rather than being a static number (sorry, I'm a programmer).

In this case the procedure is to make the angle between two lines that run through two points in the 2D plane smaller and smaller. When the points are 1m apart and the angle is 90°, the lines cross at a distance of 1/2m. When the angle gets smaller, the crossing point moves farther away; there is no distance one can name that couldn't be exceeded by making the angle just a wee bit smaller. This is what we mean when when we say "parallel lines meet in infinity": The distance of the crossing exceeds any limit when the angle approaches 0 (i.e., when the lines become more and more parallel).

When you work in the affine (euclidean) plane, you are choosing a line at infinity and throwing it away. Therefore lines that met at infinity (i.e. parallel lines) no longer meet at all.

Likewise (and not directly relevant to your question, but as another illustration of how the affine plane throws away information), a conic (that is, a curve of degree 2) is called a circle if it passes through two particular "circular points" at infinity. Two circles are called concentric if they are tangent at both of those circular points (here a tangency counts as two meetings, so the two tangencies use up all four of the intersection points). But again, the identity of the circular points depends on your coordinate system, so that whether a conic is a circle, and whether two circles are concentric, depends on your coordinate system. And if you throw away the line at infinity, concentric circles don't meet at all.

Not the answer you're looking for? Browse other questions tagged definition reflection geometric-optics mathematics geometry or ask your own question.

6
How can parallel rays meet at infinity?

0
Are these reflected rays really parallel?
3
Why do light rays going to infinity form a real image?
1
Can a convex mirror form a real image?
0
Why does a spoon form a virtual image though it is a concave mirror?
1
What will be the effect on the image formed by a mirascope if spherical mirrors are used instead of parabolic mirrors?
0
Ray Diagrams: Where is the eyepiece located in a reflector telescope?
6
How can parallel rays meet at infinity?