Why does critical damping return to equilibrium faster than overdamping?

How can one prove that the critical damping regime returns to equilibrium fastest? Is it true that there are cases where the heavy damped solution will return faster?

However, what if the constant $A_2$ is zero? Surely then the heavy damping scenario returns to equilibrium more quickly than critical damping?

There are good mathematical answers to this question. I'd like to give an intuitive one.

Consider the following situation: a sphere falling through a viscous fluid: 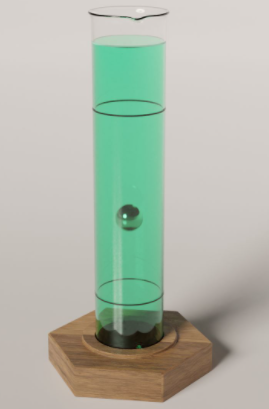 Equilibrium is when the sphere sits at the bottom without any movement.

Damping can be increased by making the fluid more viscous.

An underdamped situation is when the fluid's viscosity is too low. When we drop the sphere, it will bounce back and forth before settling down.

In a very overdamped situation, the sphere will take a long time to fall through the fluid to reach the bottom.

In the perfectly balanced situation (critical damping), the sphere falls as fast as it possibly could and there is no rebound. It just touches the bottom surface and sits there. This will be the fastest as compared to previous two cases. 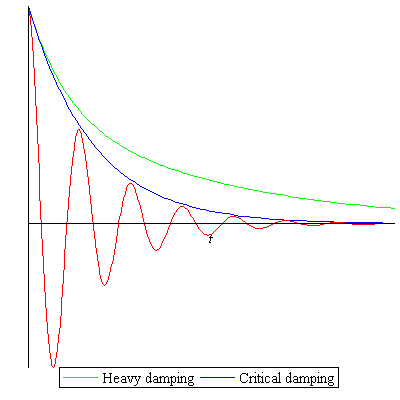 It is only reasonable to compare the overdampled and critically damped case given the same initial conditions. Equivalency of both the initial velocity and position gives two equations.

But exactitude does not exist in the real world. Even if initially $A_2$ is as small as you can arrange it to be, it will never be exactly zero. And since both terms in (2) decrease exponentially faster than $e^{-\mu_2 t}$, however small a non-exactly zero value of $A_2$ is present in the very carefully prepared initial state you use, eventually the term that damps at the slowest rate, namely $A_2 e^{-\mu_2 t}$ will dominate.

Of course, if you prepare your initial state very carefully, so $A_2$ is extremely small, by the time $A_2 e^{-\mu_2 t}$ dominates the motion everything will be below the precision of your measuring apparatus. Then the experimental curve would show a faster decrease for the "heavy damping" up to the point where it is lost in the thickness of the ink of the line.

I suppose that, for cases where $\gamma$ is just barely larger than $2\omega_0$ it could even be done experimentally. At the price of an enormous effort.

What the OP asks for is indeed possible but only for very specific initial conditions.

There are a few things to discuss, the first being what does "returning to equilibrium faster" mean. First, we are trying to compare the behavior of two different systems (I will assume they have the same damping coefficient $\gamma$ but different resonant frequencies $\omega_{0,1}$, $\omega_{0,2}$), so it makes sense to only compare solutions to the two systems with the same initial conditions.

I will work with the first definition in terms of the asymptotic behavior.

This means that our solution in the overdamped system is $x_1(t) = A_1e^{-\mu_1t}$. Looking at $t = 0$, we have $x_1(0) = A_1$ and $x_1'(0) = -\mu_1 A_1$. Therefore, it is possible for a solution to system 1 to reach equilibrium faster than a solution to system 2 if the initial conditions satisfy the property that $x'(0) = -\mu_1 x(0)$. As $\mu_1$ is positive, and assuming we start from a positive value of $x$, then this just means that you need to give an initial velocity with just the right amount in the negative direction to achieve this. However, if we are starting at rest (zero initial velocity), it is impossible unless we are already at equilibrium.

As mentioned before, we had to pick the initial conditions just right to make this work. In practice there will never be an exact precision in the initial velocity that is given, so there will always be some component decaying at the slower rate. However, it may still be possible to make the magnitude of this component small enough for short times, and then we can use the second definition of "returning to equilibrium faster" to produce more realistic examples of the phenomenon.

Another thought: the previous discussion was based on the assumption that we keep the damping coefficient $\gamma$ the same and vary the resonant frequency $\omega_0$ to achieve overdamping or critical damping. However it might be more interesting to keep $\omega_0$ constant and vary $\gamma$ instead. So we have damping coefficients $\gamma_1 > \gamma_2 = 2\omega_0$ for the overdamped system and the critically damped system, respectively.

With more damping than critical damping the system will always lag behind a critically damped system as it will lose mechanical energy faster and reach the static equilibrium position exponentially (never ending).

Critical damping means that the system will reach the static equilibrium position with no overshoot and with zero velocity and hence will be the fastest.

Simplest answer is that it is just a matter of jargon. Obviously, with very little damping the system may vibrate increasingly (unstable), or the vibration may dampen out after a long time.

With a lot of damping it will get to the stable position but it may take long, very long, or "forever".

Not the answer you're looking for? Browse other questions tagged newtonian-mechanics friction harmonic-oscillator oscillators dissipation or ask your own question.

4
Faster than critical damping for harmonic oscillator?
0
Why is the energy stored in a driven oscillator equal to the product of friction dissipated power $P_\text{fr}$ & decay time $\tau$ at resonance?
0
How can I derivate the solution of the under-damped harmonic oscillator?
1
Critical damping, overshooting
0
Solving a classical damped free particle via the Fourier transform (and residue calculus)
4
Can concepts like "critical damping" or "resonant frequency" be applied to more complex systems than just a spring and damper in parallel?
4
Simple oscillator displacement, speed, and acceleration diagram
4
Why are the resonant frequencies for displacement, velocity and acceleration different in a damped oscillator?