What is causing the diffraction pattern on my ceiling?

When I wake up in the morning and look at my curtains, I see a pattern on the ceiling made by the light going through the gap between my curtains. I have added a picture of it below. I remember from high school that when a laser was being shot through a very thin slit, that you would get a similar pattern. However, I see two important differences here:

So if this is not a diffraction pattern caused by the wave particle duality of light, then what is causing this pattern to appear on my ceiling? 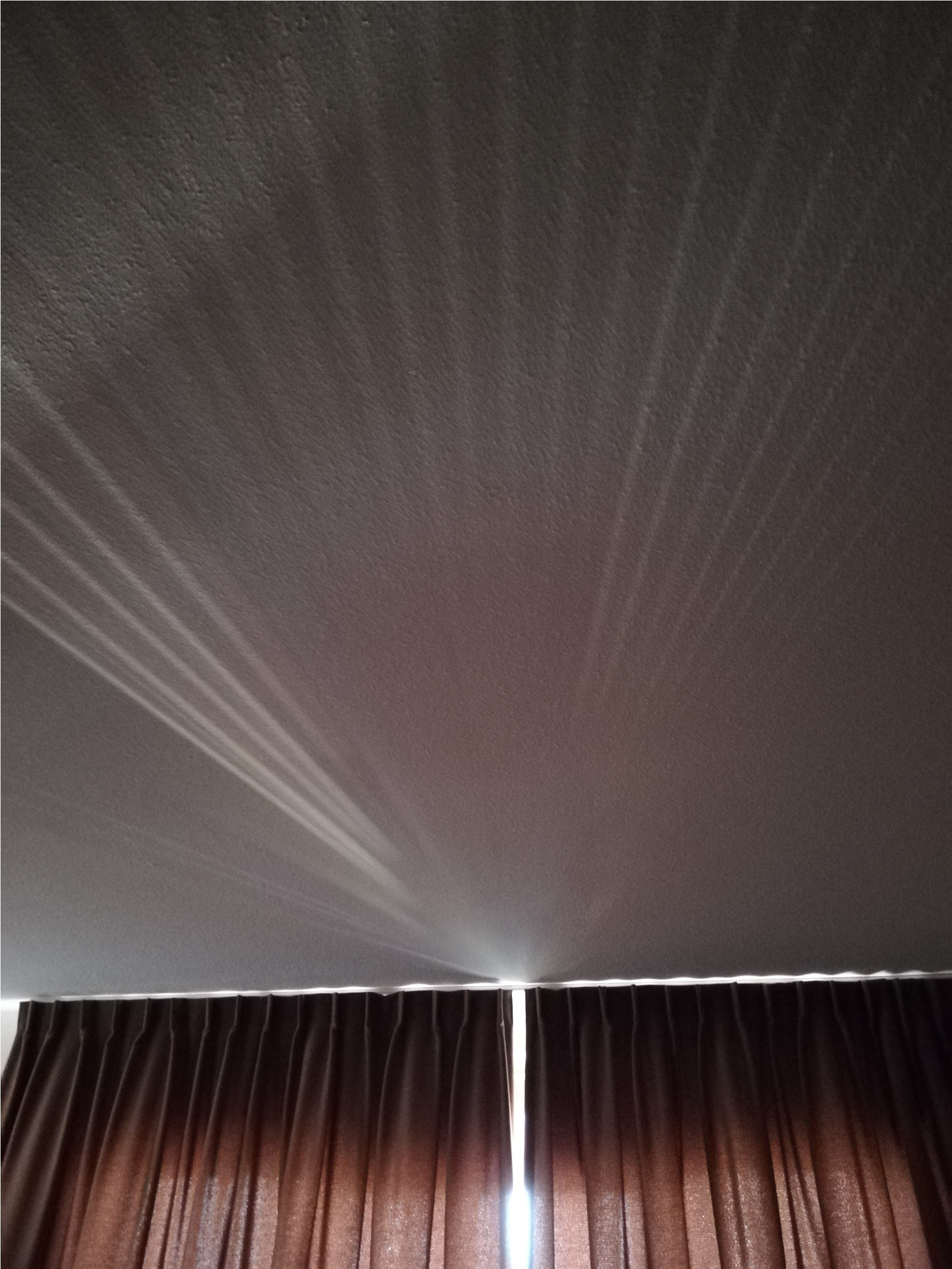 Edit: Okay, so I looked again at the light pattern and the building across and now think that the vertical white beams are causing the pattern. The light pattern is just the horizontally mirrored reflection of those white beams. The part of the building in the front right has 6 beams, which correspond to the 6 bright beams of light. The back left has a lot more beams which are further away and seem thinner because of it, so those we see on the right in the picture.

Now I am wondering why the horizontal white beams are not showing up on my ceiling. 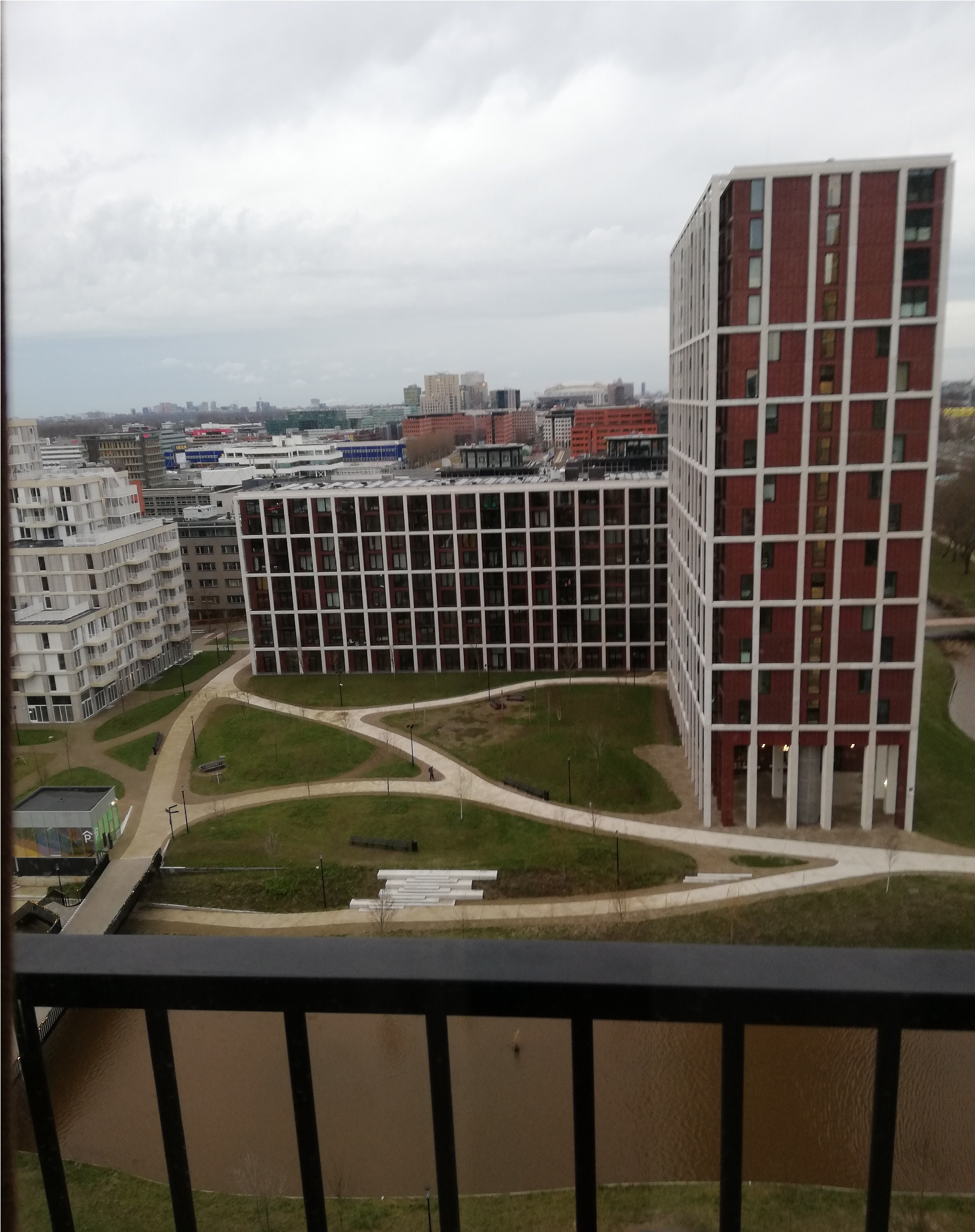 The rays are white, so it does not look like diffraction. Maybe it is an effect similar to that in camera obscura, so it is a (transformed) image of some outside object.

EDIT (Jan 1, 2022): So the OP provided a photo of the outside objects and asked "why the horizontal white beams are not showing up on my ceiling". I am not sure about the following, but my guess is the gap between your curtains is a "line", not a round hole, as in camera obscura, so it works as camera obscura only in one dimension. Maybe the faint wide transverse white bands on your ceiling are the images of the horizontal beams, but again, I am not sure. One could calculate the image of the array of white beams in your "optical instrument" (gap between the curtains), but I am not sure I am going to do that:-)

Since the beams are going up to the ceiling, they must be reflecting from something low outside. Take a look.

It looks as though it may be a reflection off the curtain rod.

It is a crepuscular rays phenomenon.

crepuscular rays, shafts of light which are seen just after the sun has set and which extend over the western sky radiating from the position of the sun below the horizon. They form only when the sun has set behind an irregularly shaped cloud or mountain which lets the rays of the sun pass through a cloud in bands. The radiating appearance of the bands is caused by perspective, as demonstrated by the fact that when on rare occasions the rays extend across the entire sky, they appear to converge again on the eastern horizon. 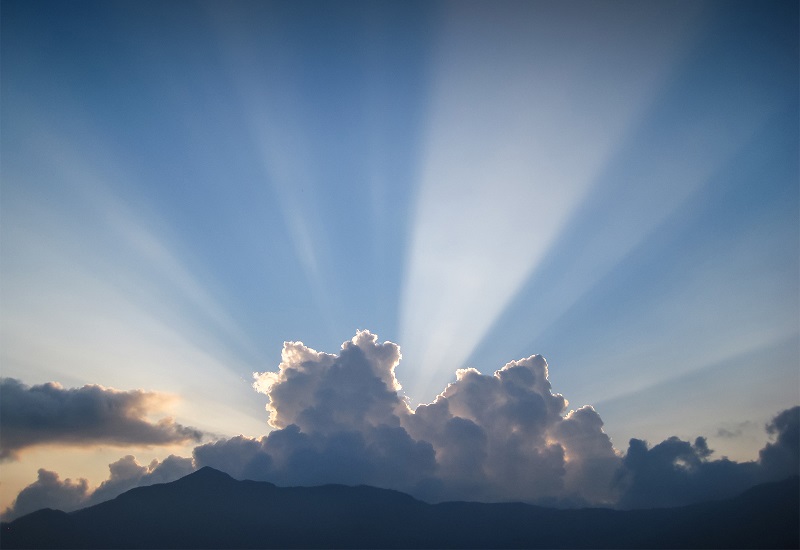 Something in you curtain setup is macroscopically scattering sun light early morning when the sun is low at the horizon and sunlight comes horizontally inside your room creating the same phenomenon.

From the data you are given if it is not something else in your general curtain setup my best guess is that the gap is responsible and just the correct amount for scattering sun light inside the room and creating the crepuscular rays.

You never said what happens if you open more your curtains. I guess the rays would vanish.

Not the answer you're looking for? Browse other questions tagged everyday-life diffraction wave-particle-duality or ask your own question.

5
How do I see things of the bright room, being in the dark room?
149
Why does a mirror split my laser beam?
71
Why do beams of light (from torches or other directed sources) not extend to infinity?
15
What's the origin of the flattened X that appears when of a small (but powerfull enough) light is reflected in our non-powered TV screen?
1
Can single photons make a hologram over time
6
Did diffraction bend this light more than 90 degrees?
7
Colour patterns from the reflection of my window
0
Single slit diffraction with a slit width much larger than the wavelength