What is the physical intuition behind this energy conservation theorem?

I'm reading Quantum Theory for Mathematicians, by Brian C. Hall. Although the book is about Quantum Mechanics, it's chapter 2 is actually about Classical Mechanics, in which I encountered the following theorem: 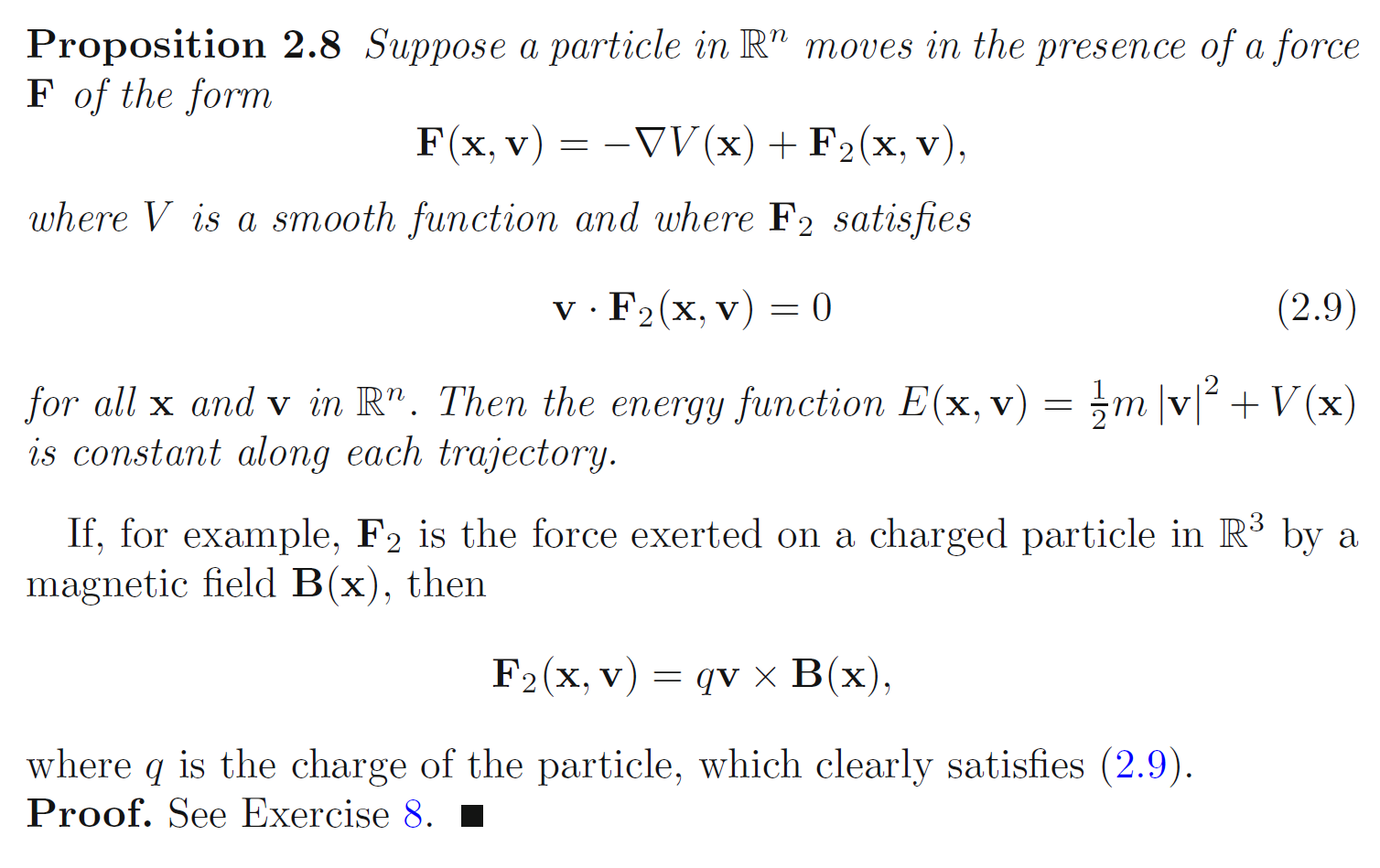 Rephrasing in English, suppose a force acting on a particle has two components. The first component comes from a potential function and the second component is orthogonal to the velocity. Then the energy of the particle is conserved.

What is the physical intuition behind this theorem?

This is a generalization of a result commonly discussed in Electrodynamics: magnetic forces do no work.

The idea is that for the energy of the particle to change, some force must do work on the particle due to the work-energy theorem. For the force Hall chose, we can split the analysis in two parts: the potential and the "magnetic" force (I'll give it this name in analogy with Electrodynamics).

The potential can do work, but it also goes in the very definition of energy. It is what we call a conservative force. If it accelerates the particle, the potential energy drops in exchange. Notice there is some sort of equilibrium in here: this force can make the particle go faster, at the expense of the potential getting lower. In general, this means there is a maximum possible speed the particle can get by being accelerated by the force, for eventually one will "run out" of potential energy and all energy will be kinetic. Furthermore, if the particle slows down, the loss of kinetic energy is just being traded for potential energy, which can once again be converted in kinetic and so on.

For the magnetic force, things are quite different. It does not enter the definition of the energy, so in principle it could spoil this idea and either accelerate the particle indefinitely (which would be non-physical) or "steal way energy" (which is the case for friction). What the theorem is showing is that forces that are always normal to the velocity do neither: they can only change direction. The fact they are always orthogonal to the velocity means that the infinitesimal amount of work they can do will always be $$ \begin{align} dW &= \mathbf{F \cdot} \text{d}\mathbf{l}, \\ &= \mathbf{F \cdot} \frac{\text{d}\mathbf{l}}{\text{d} t} \ \text{d} t, \\ &= \mathbf{F \cdot v} \ \text{d} t, \\ &= 0, \end{align} $$ hence, it can't do any work. As a consequence, it can't change the energy. (I think/hope this doesn't solve Exercise 8, since this argument is usually fair game for physicists, but too sloopy for mathematicians hahaha).

In short, one possible physical intuition is that if a force is orthogonal to the velocity, it can only change the direction, it can never lead directly or indirectly to an increase or decrease in speed. As commonly stated in Electrodynamics, "magnetic forces do no work".

Not sure if this helps, but...

If you start off with Newtonian mechanics, energy conservation has to be added in as an additional axiom. (As in "... and only forces which conserve energy are found in the wild").

If you start off with Lagrangian mechanics it is simply not possible to write a Lagrangian which does not lead to a conservative force.

At first I thought Newtonian and Lagrangian formulations were totally equivalent, but once I grasped the above it suddenly made sense why people consider Lagrangian to be more fundamental.

So the physical intuition is simply that a formulation of mechanics based around conserved energy is more fundamental than one based around force, and forces are simply derived from that.

Not the answer you're looking for? Browse other questions tagged classical-mechanics magnetic-fields energy-conservation work or ask your own question.

82
Why can't the Schrödinger equation be derived?

1
Having Trouble With The Principle Of Conservation Of Momentum For a Multiparticle System
4
Questions about angular momentum and 3-dimensional(3D) space?
2
Configuration manifolds and constraints
7
Physical intuition about the inertia tensor
5
Physical intuition behind Poincaré–Bendixson theorem
8
Connection between Noether's Theorem and classical definitions of energy / momentum
5
Intuition about conservation of volume in phase space (Liouville's theorem)
4
Where is (mechanical) energy conserved?