What happens with the force of gravity when the distance between two objects is 0?

so I had my first approximation to the gravity equation

\begin{equation} F=GmM/r^2 \end{equation} and some questions arose that my teacher couldnt respond:
if r approximates to 0 with mM being constant, then the force should tend to infinity, right? so that being true, then if we would travel to the center of the earth, we would be crushed by gravity? if so, how can there be anything right in the center of the earth? wouldnt anything there be compressed and destroyed by the infinite force? having that in mind, my next question is as gravity force is measured from the center of an object, any part of the same object which is not at the center would be affected by the same object's gravity? if so, how can we differentiate between two objects that are not in a vacuum? my question originated thinking in us standing on the earth, in contact with it, are we, in a gravitational sense, one object? this lead to the last question, if gravity is a property of matter, then how applying the same logic as before, how does it work between two neutrons?(chose neutrons because i assumed it would be more difficult obtaining gravitational force if there was electrostatic forces from charges inbetween) do two newtrons in contact count as 1 gravitational object? and how thats its own gravity affect the newtron from center and out?

In your question, I see 3 different context, where considering gravitational forces :

c) A auto-gravitating extended spherical symmetric object (not too dense)

b) If you consider a problem of a point-like object and a extended spherical symmetric object like Earth (not too dense), a theorem states that a object at distance $r$ only feels the gravitational force of masses inside the sphere of radius $r$.

That is, for instance, if the point-like object is inside the earth at radius $r < R_{Earth}$, it feels only the gravitational force of masses inside the sphere of radius $r$.

So, when $r\rightarrow 0$, nothing bad, about gravitation, appears. (of course, temperature and pression increase very much...)

If the spherical object is very dense, it is an other story, because you have a black hole, and you may have a "singularity": it is thought that something very bad happens to objects reaching the singularity (tidal forces, roasted, etc..). But you are here in the context of general relativity.

c) The last problem is an auto-gravitating extended spherical symmetric object. I will just give this reference Of corse, as usual, if the object is too dense, you need general relativity, black holes, etc...

If the distance to a (point-sized) object actually were zero, indeed you'd have a situation of a singularity. But in your example -- being at the centre of the Earth -- the force is actually zero, since equal forces are acting at you from all directions. In general, the inverse-square law is applicable to point particles, and needs to be integrated over all points in the Earth placing a gravitational force on the object to get the resultant force.

Regarding your new questions -- if you're at the midpoint between equal masses, you're stationary; if you're on the perpendicular bisector, you'll be drawn towards the midpoint because that's how vectors add up; if you're buried inside one of the two masses, the only forces acting on you will be from the sphere of mud under you and the other mass far away (the other mass isn't part of the shell above you). 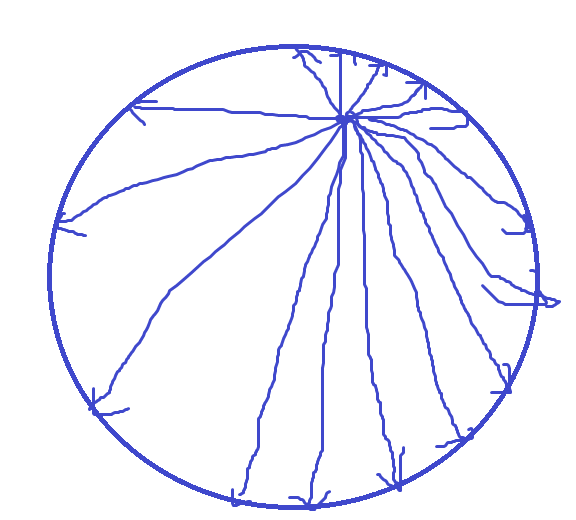 Forces being zero inside a spherical shell, since the smaller masses are closer to compensate for their mass, and the larger masses are further away. 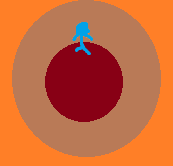 Newton's shell theorem -- the blue guy only feels gravity from the mud-sphere under his feet. 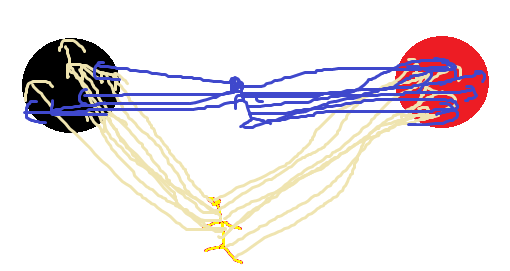 Three-body problem where one of the guys is a useless test mass who lives on the perpendicular bisector of the two bodies.

The orange horse inside the black mass feels gravity from both the mud-sphere under it and from the red mass.

There's an implicit question here, which is when does a conglomerate of particles count as a single object for the purposes of gravitation? The answer, in theory, is never.

The earth isn't a single object; it's a conglomerate of many particles. When you're pulled by the earth's gravity, you're really being pulled by each particle individually. If you were standing one meter away from the center of the earth, the entire earth wouldn't pull you towards its own center with a humongous gravitational force. Instead, each of the earth's individual particles pulls you toward it with a tiny force. It turns out that these tiny forces mostly cancel out (since they're going in all directions approximately equally), so you're left with a very small overall force.

(Of course, the temperature and pressure near the earth's center are both immense, so you'd be crushed and burned.)

Now, it happens to be true that if you're far away from an object, then the gravitational force is approximately the same as if the entire object were concentrated at a single point. As far as I know, this approximation doesn't hold true when you're close to an object.

I don't know what are your philosophical goals with the question , but as long as you "enter" the object (distance <= 0?), the object isn't a single one anymore. In fact, you standing on its center, each piece of earth influence would be canceled by the sum of all other pieces.

What happens to the force of gravity as the separation between two masses approaches 0, is that it increases. Although it can attain a large value, in practice, it never goes to infinity. This is due to the fact that the masses, even if very small, have a radius. Therefore, the closest they can be is r1 + r2, were r1 & r2 are the radii of the masses m1 & m2. In the case of 2 neutrons, it would be the diameter of a neutron, since the radius are the same. At this distance, the force would be at its maximum since the "centers" can't get any closer.

Not the answer you're looking for? Browse other questions tagged gravity newtonian-gravity singularities or ask your own question.

-3
Gravitational force if distance is $0$
40
Would you be weightless at the center of the Earth?
-1
Gravity in the center of a hollow neutron star
1
Why do inverse square forces not rise asymptotically for $r\to 0$?
1
Force when distance between charge is zero
-3
Why terminal velocity exists?

2
Laws of gravity for a universe that only consists of two objects?
14
Gravity - What happens when two objects of unequal masses fall freely towards the ground? (Revisited)
2
Does the gravitational force of a massive, spherical body draw only towards its center of gravity, and to no other area?
5
What is the speed of Newtonian gravity?
40
What is the smallest item for which gravity has been recorded or observed?
1
Is gravity really a force that occurs between composite “objects,” or is it individual atoms?
1
What happens to the gravitational potential energy when particles annihilate?
0
What happens to graviational force when separation between 2 objects is very small?
0
How is force of gravity between two objects equal?