In various types of stars, one can learn how they evolve differently, depending on factors such as their size and chemistry. Some stars have a short lifetime and others much longer.

But, what is known about the lifetime and evolution of gas giants. Do they just remain stable until some external source, such as the burn out of the sun, disrupts this?

Gas giants start big and luminous and get smaller and less luminous.

Their gravitational contraction gives them a luminosity. The virial theorem then demands that they must contract in response if their gas pressure is a function of temperature.

However after evolving for some time, the cores of gas giants become partially and then nearly fully electron degenerate. A degenerate gas can cool whilst maintaining its pressure. As a result the contraction slows and tends towards a cold equilibrium size. Throughout, this evolution the luminosity is approximately proportional to the reciprocal of the age.

The following picture was taken from the review of Fortney et al. (2011, in Exoplanets, edited by S. Seager, Univ. of Arizona Press, p.397), showing the radius evolution for various compositions. 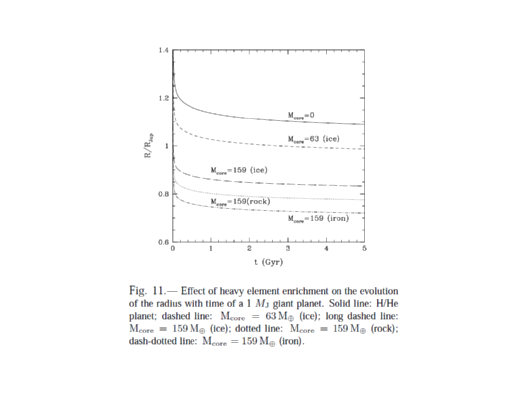 There are many, many details beyond this very rough sketch. The whole field, as you might imagine, is extremely active at the moment, thanks to the discovery of many giant exoplanets. Complications include how do they form; what are the compositions; how do chemical elements separate; how is tidal heating and irradiation felt; what is the high pressure equation of state; what are the cores made of?

One process that is happening currently for Jupiter and Saturn is separation of helium out of the mixture of hydrogen and helium.

The prevailing theory is that helium falls like rain from outer to inner regions of these planets.

Saturn is further along in this process since it is smaller and cools faster. This explains the lower observed levels of helium in Saturn's outer atmosphere compare to Jupiter's.

This is indeed an alternative theory, i first read the above comments and saw a general point of agreement, that is in heat loss and contraction, the General Theory of Stellar Metamorphosis (GTSM) is based on that principle but starts at stars and then stars lose heat, contract and go through phase changes, from plasma to gas, liquid, solid, this means stars and planets could be the same objects just in different stages of evolution. It is a theory that fully encompasses the opening question by user2675, where gas giant evolution is part of this grander theorized process. Jeffrey Wolinski is dong the theory development, this is a link to his starting paper > http://vixra.org/pdf/1205.0107v9.pdf

For the current sciences it is indeed controversial, or not depending on how you look at it, as mainstream science calls gas giants failed stars sometimes, GTSM says they once were stars and are evolving. I think it is good to have different ideas and to keep thinking.

The new Juno mission is exciting in that regard, the blue color at the poles, lots of activity...is Jupiter evolving?

Gas giants evolved from being shining stars and will further evolve to become more liquid (uranus, neptune) to water worlds to earth (water/rock) etc. This new theory is called: The General Theory of Stellar Metamorphosis. In this theory stars and planets are the same objects (called Astrons) and they evolve from bright plasma to solid rock, all the while radiating and contracting (with possible expansion phases) and thus evolving. This theory also changes the life paradigm of the Universe since now every shining Astron can become a life hosting world.

Not the answer you're looking for? Browse other questions tagged exoplanets stellar-evolution jupiter or ask your own question.

4
Stellar evolution simulation engine or software
6
Earth-Moon orbiting each other after being engulfed by Red Giant
3
Predicting stellar evolution and life cycle of a star
6
Red Giant branch and Asymptotic Giant branch
6
Lifetime of a horizontal branch star
4
Chemical and stellar evolution in stars
10
How can a gas giant be about the same size but six times more massive than Jupiter?
4
How do we know what happens to stars during their life cycle?
0
How can a red dwarf have such an immense lifetime?
2
Evolution of red dwarf stars