According to Hubble's Law, how can the expansion of the Universe be accelerating?

Scientists today think the expansion of the universe is accelerating.

According to Hubble's law, objects further away are moving faster than objects closer to us. The further away an object is, the further back in time we are seeing, so in the past objects moved faster (is this sentence correct?).

So because objects moved faster before than they do now, surely that's deceleration not acceleration?

my textbook says "if Scientists today think the rate of expansion of the Universe were decreasing then distant objects should appear different to Hubble's Law predictions: universe is accelerating. More distant objects would seem to be receding faster (since expansion was faster in the past)"

Basically, the Hubble Law is a consequence of the cosmological principle, i.e. that the universe on large scales is isotropic and homogeneous. This means that the expansion of the universe can be described by a single function of time, the so-called scale factor $a(t)$, so that the distance to a faraway galaxy increases over time as $$ D(t) = a(t)D_c, $$ where $D_c$ is a constant, called the co-moving distance to the galaxy; $D(t)$ is known as its proper distance. Also, the present-day value of $a(t)$ is set to 1 by convention, i.e. $a(t_0)=1$, so that $D(t_0) = D_c$.

Unlike the recession velocity, the redshift does give us information about the past, because the redshift of a photon accumulates over time, during its journey from the source galaxy to us. By comparing the redshifts of two galaxies, we can deduce information about the expansion rate in the past: suppose we observe two galaxies with distances $D_1 > D_2$ and redshifts $z_1 > z_2$, which emitted their light at times $t_1$, $t_2$ respectively. Then the difference in redshift $z_1-z_2$ will tell you how much the universe expanded in the time interval $[t_1,t_2]$.

Early observations and inflation models suggested that the curvature of space is close to zero, which would mean that $\Omega_{M,0}\approx 1$ if there's no dark energy (the contribution of radiation is negligible). On the other hand, dynamical studies of galaxy clusters indicated that $\Omega_{M,0}\approx 0.3$. Furthermore, models without dark energy led to a 'cosmic age' paradox: the calculated age of the universe in these models was less than the age of the oldest observed stars (see Krauss 1995 for a review). These issues were resolved in 1998 when two teams applied Hubble's Law to a sample of supernovae, comparing their distance and redshift, which offered clear evidence for dark energy, with $\Omega_{M,0}\approx 0.3$ and $\Omega_{\Lambda,0}\approx 0.7$, and a Hubble constant $H_0\approx 65\;\text{km}\,\text{s}^{-1}\,\text{Mpc}^{-1}$. These values have been further refined by CMB observations.

The effect of dark energy can be seen in this figure: 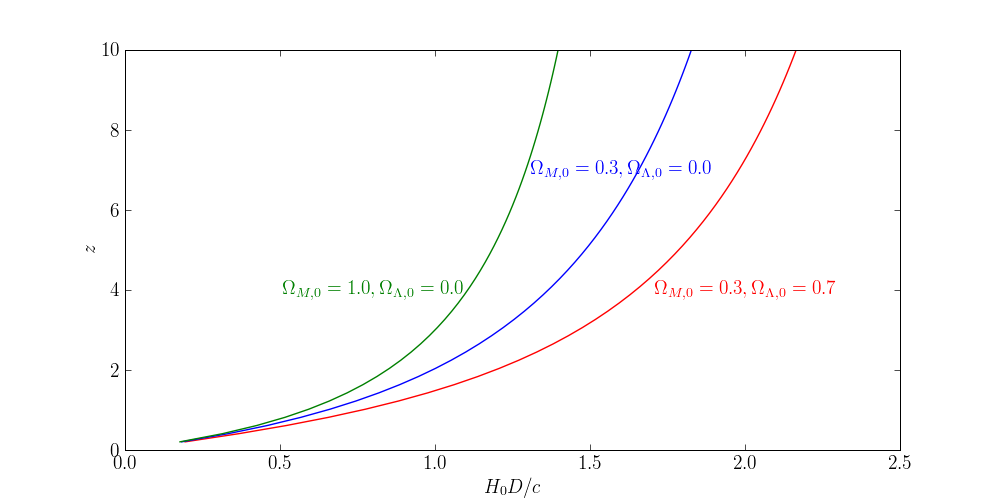 Let's apply this to a particular galaxy. Suppose we have a galaxy at a present-day distance $D = 10$ billion lightyears. We then have the following situation: 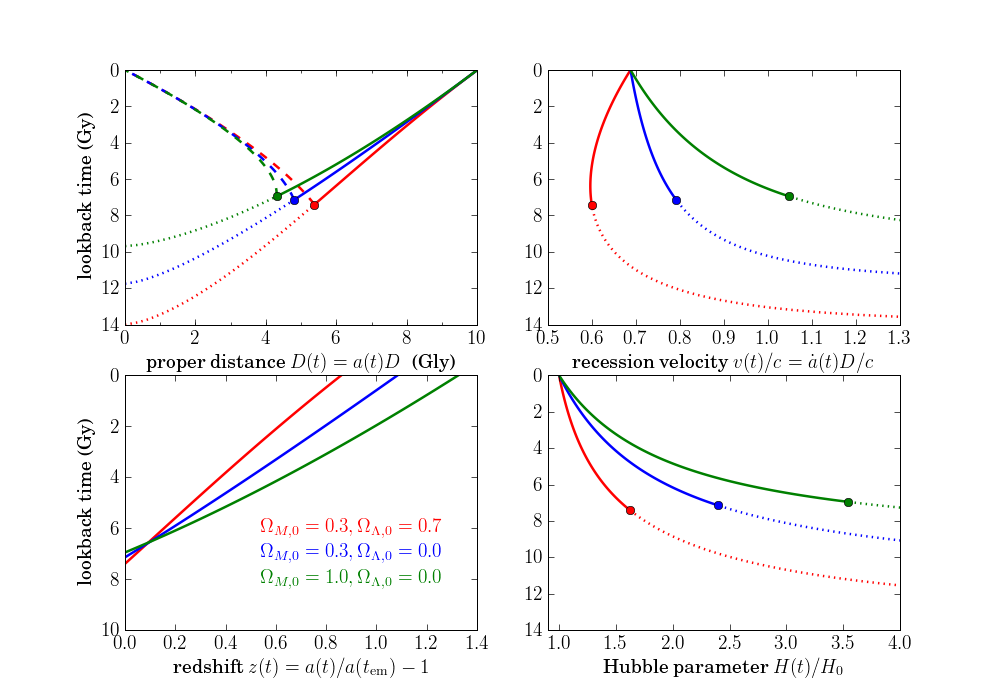 The first graph shows the proper distance of the galaxy and its light $D(t)=a(t)D$ as a function of lookback time $t_0-t$. In all three cases, $D(t)=0$ corresponds with the 'big bangs' of these models.

The change from dotted lines to solid lines indicate the moment $t_\text{em}$ at which the galaxies emitted the photons that we observe today; the dashed lines are the paths of those photons. In all three models, the photons were emitted about 7 billion years ago. But the corresponding scale factors $a(t_\text{em})$ are very different: $a(t_\text{em})=0.54,\,0.48,\,0.43$ for the red, blue, green models respectively. This is a direct consequence of the different age of the universe in the three cases.

This immediately explains the redshifts shown in the graph below: the present-day redshift of the light is $z=0.86,\,1.1,\,1.3$ in the respective models, i.e. the observed redshift is much lower in the dark energy model.

Although it's not very clear, the red curve of $D(t)$ has an inflection point about 6 billion years ago, corresponding with the moment when $\ddot{a}=0$ and the expansion of the 'red' universe began accelerating. This is much clearer in the top right graph, showing the recession velocity $v(t)=\dot{a}(t)D$. In all three cases, $v(t)$ was much higher in the past, which means that the expansion has been decelerating. But in the dark energy case, $v(t)$ reached a minimum value around 6 billion years ago, and began to increase again. This is the effect of recent acceleration due to dark energy.

Finally, the last graph shows the Hubble parameter $H(t)=\dot{a}/a$, showing that even in the accelerating universe $H(t)$ decreases.

To summarise, the influence of dark energy determines the redshift, proper distance and the recession velocity over time, but it's not really its effect on the accelerating expansion that's important, but rather its effect on the age of the universe.

I'll shot out my opinion. Just recall $v=Hd$ in your mind and you'll get it...

So in the past objects moved faster

Looking into the past (as you say), the objects would've been closer than they are now. So, they would've had moved at some lower velocity than they're now.

A rough analogy (?): The easiest expression can easily show the metric expansion :)

Not the answer you're looking for? Browse other questions tagged cosmology universe space-expansion or ask your own question.

-3
On the evolution of the universe that currently has no definitive answer to how it is evolving and at what rate:
63
Can space expand with unlimited speed?
10
Dark Energy / Accelerating universe: naive question
9
Lookback Time & Age of the Universe Calculations
4
Is Hubble's constant really constant?
1
How does measuring redshift make us conclude that rate universe expansion is accelerating?
0
Equations for Big Bang expansion, distance and energy
1
If Hubble parameter varies with time how much it differs for low distances (present) and deep space (past)?
0
Can we calculate the expansion rate of the Universe at each moment in time?
1
Metric expansion of space - past, present and future
See more linked questions

14
Are scientists missing the point with distant cosmic objects, or is it just me?
7
Can we see ALL of the observable universe?
1
How does measuring redshift make us conclude that rate universe expansion is accelerating?
10
Dark Energy / Accelerating universe: naive question
7
Accelerating expansion of the universe: so?
4
How is the speed in Hubble's law determined, if not from the Doppler shift?
2
Universe expansion / contraction ambiguity
0
Can everything be accelerating away with a nearly constant Hubble Parameter?
0
How to determine current expansion rate of universe from observing past objects?