What I have not seen is a purely classical argument for the non-separation of a black hole merger. One can obviously take the time reversed spacetime manifold of a merger and get a valid manifold that splits - but this is a black hole disturbed by a complex ingoing set of strong gravitational waves that splits, a bit like how a loud crash sound converging on some shards can in principle make them reassemble into a vase jumping back up on a shelf. Possible, but thermodynamically impossible. 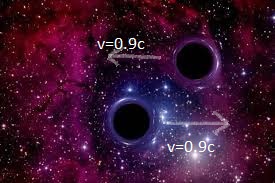 Imagine a setup where two black holes of similar size and energy moving both at relativistic speeds, but in opposite directions so, that when they pass by, their event horizons slightly overlap. Now as far as I understand, gravitational fields here are extremely strong, but not infinitely strong. In my understanding, the kinetic energy of the black holes could overcome the gravitational attraction, and even if the event horizons (which are not physical objects, but just boundaries) slightly overlap, the black holes themselves could continue their way in the opposite directions, and separate the event horizons again (maybe by exchanging part of their energies, so that they change mass).

The first answer says so (it is possible), and the second answer only applies the speed of light limit to say no. The second one is arguing about the escape velocity, but that is not what I am asking about. I am not denying that the horizons will inevitably overlap. I think it is a given that the effects of gravity travel at the speed of light (faster then the black holes), and the horizons will overlap. But just because two boundaries overlap where the escape velocity is exceeding the speed of light, why would that affect the whole objects' (black holes) interior completely? Just because the two boundaries overlap (meaning a partial unification), that does not necessarily mean that the interiors of the objects will completely unify. The rest of the objects could have kinetic energies that overcome gravity. I believe that it is not correct to think that black holes are some kind of rigid solid objects (where if the boundaries touch it will grag the whole object inevitably), whereas in reality they are objects like stars but with a boundaries that signal the extreme gravitational field. Extreme does not mean infinitely strong, that is very important. What I am asking about is the possible domination of the kinetic energies over the attraction of gravity.

So there are two thought coming to mind:

No, they can't. One two black holes touch, they won't split again.

I'll sketch a little formal argument which can provide some intuition, but should not be taken too seriously. Nevertheless, I believe it provides an intuitive contradiction in the situation you presented. I invite other people to comment on possible issues and I will raise a few of them myself. At the end of this answer, I'll provide a more solid answer by referring to a rigorous theorem on black hole physics.

Let us suppose one can somehow realize the situation you mentioned, but let me add a minor thing: suppose there is also some point particle of negligible mass on the spacetime. Suppose further this particle is in the intersection of the two black holes when they are superposed. Now, once the black holes separate (assuming the situation you presented is possible), in which of them should the particle stay? It should not be able to leave either black hole, but since they are separating and the particle is in the intersection it will need to somehow choose which black hole it will stay in.

Let me provide an alternative, but very similar, argument. for a Schwarzschild black hole, once a particle is inside the black hole, it must necessarily fall into the singularity within finite proper time. More specifically, one can show (see Problem 6 of Chap. 6 of Wald's General Relativity) that the maximum lifetime of of any observer within the event horizon is $\tau = \pi M$ ($c = G = 1$), where $M$ is the black hole's mass. However, this holds for both black holes (if we assume them to be Schwarzschild), so the particle should crash into singularity $r_i = 0$ within proper time $\tau_i = \pi M_i$. Since this must happen for both black holes and they are (by assuming the situation you proposed) getting further apart, we've reached a contradiction. If the black holes do not merge, then a particle would need to be able to escape the black holes (to be fair, I think the ).

Now for some issues with these lines of thought.

I can't really provide much more intuition, so in this section I'll just provide a statement and a reference for the detailed discussions. Proposition 9.2.5 of Hawing & Ellis' The Large Scale Structure of Space-time reads (up to notation)

Notice that, from these definitions, once the black holes touch, they are then one black hole only, and from the proposition I mentioned it follows that it can no longer split.

Hawking & Ellis is, of course, not the only reference discussing this result. Wald also proves it as Theorem 12.2.1 on the book I mentioned above. It is also shown on p. 73 of the Lecture Notes on Black Holes by H. S. Reall.

Not the answer you're looking for? Browse other questions tagged general-relativity gravity black-holes event-horizon binary-stars or ask your own question.

3
Can two passing black holes touch without merging?
29
Is there a way to split a black hole?
4
Black holes: Is merger inevitable when horizons touch?