Under what conditions is a pure fusion nuclear bomb possible?

Is it possible to build a pure fusion and powerful nuclear bomb?

Fusion happens between light nuclei. It cannot happen in room temperatures and pressures, it needs very high energies in order to strip the electrons from the nucleus and to overcome the electromagnetic repulsion of the positive charges . 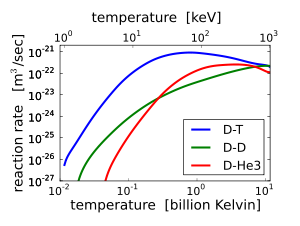 The fusion reaction rate increases rapidly with temperature until it maximizes and then gradually drops off. The DT rate peaks at a lower temperature (about 70 keV, or 800 million kelvin) and at a higher value than other reactions commonly considered for fusion energy.

Fusion experimentally, apart from the Hbomb, has been sustained at JET, an experimental facility, by confining a plasma at the high temperatures necessary, in a tokamak, a specially designed magnetic field. This design is extended into ITER which is a prototype fusion energy reactor, i.e, will give out more energy than spent in creating the magnetic field and the plasma. If you look at the links these are huge constructs not suitable for bombs.

A second direction in creating the plasma temperatures necessary for sustained fusion is with very strong lasers. If you look at the photo of the system needed to reach fusion energies again you will realize that it cannot become the central part of a bomb.

That is where present day technology is. Hopefully by the time nanotechnology catches up with fusion humanity will have matured enough to use fusion only for getting unlimited energy.

"Powerful" is a relative term. According to the pure fusion weapon Wiki article (helpfully linked by Jim in the comments), a PFB with current technology would weigh about as much as the equivalent TNT yield. I suppose that would not be considered relatively powerful.

As is, I think, well known, the majority of the yield from Tellar-Ulam thermonuclear weapons is from induced fission of a tamper by the flux of neutrons from the fusion reaction.

Indeed, so-called "boosted" fission weapons use a small fusion device to increase the neutron flux and thus, yield of the fission reaction.

So, with current technology, I would venture to say that the answer is no due to your "and powerful" clause.

Not the answer you're looking for? Browse other questions tagged nuclear-physics fusion or ask your own question.

5
How would the explosion from a Pure Fusion Bomb differ from the explosion from a Fission Nuclear Bomb?
12
Is an H bomb a better “fusion reactor” than the Sun's core?
43
What stops us from creating a nuclear fusion reactor as we already have the hydrogen bomb working on the same principle of fusion?
39
Why exactly do atomic bombs explode?
4
Is making nuclear bomb using natural uranium possible?
1
Hydrogen bomb without fission stage
1
Can uranium-233 mixed with natural uranium be used as a replacement for light-enriched uranium?
4
What prevents fissile materials from fully undergoing nuclear fission?
0
How can a nuclear chain reaction start?