Why are polar jets emitted along the axis of rotation?

Why are streams of energy-matter emitted along the axis of rotation of compact objects?

(or) what is the reason that they are emitted along the axis of rotation of a compact object?

This is a big, unsolved issue in astrophysics. What we know is that it's always associated with accretion: that can be during the formation of a star (a 'protostellar jet'), gas accreting around a supermassive black hole (e.g. a 'radio-loud quasar'), or the formation of a stellar-mass black-hole (e.g. during a 'Gamma Ray Burst'). It seems that cases like protostellar jets are somewhat different from jets around compact objects (neutron stars and black-holes). What we think is that it requires rotation and magnetic fields (these requirements can be relaxed a little in the case of protostellar outflows, but I'm not going to discuss that.

There are two things you need to produce a jet:

and there are different ideas about how to do each. 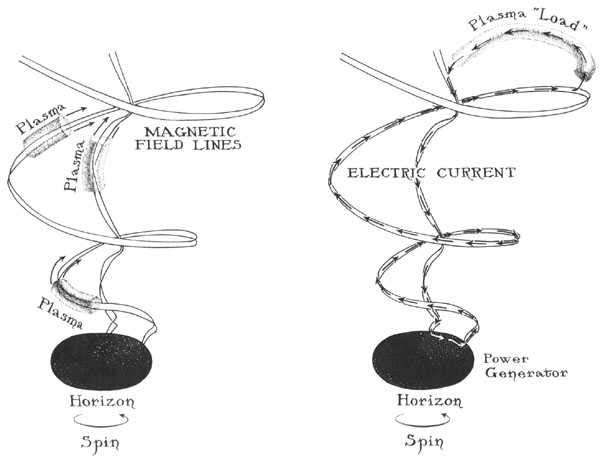 Perhaps the most common mechanism proposed for powering a jet is called the Blandford-Znajek Process---in which the twisting of magnetic fields from a rapidly rotating black-hole (or similarly for a neutron star) transfer rotational energy to outflow energy. The twisted magnetic field lines tend to push outwards.

In some situations it's possible that the immense magnetic field from a magnetar, forced to radiate due to a high spin (called 'dipole emission' also seen in pulsars), could also power a jet. Some people even think that there is enough heat and electromagnetic radiation near the poles of the central object that they would provide enough energy for a strong outflow (this is likely the case in many protostellar jets).

One of the nice features of the Blandford-Znajek (BZ) mechanism is that it automatically deposits energy in a conical shape (just like we need for a jet). Even without the BZ mechanism, magnetic fields are believed to help collimate (because plasma tends to flow along the field lines which themselves are collimated by twisting from a spinning source). 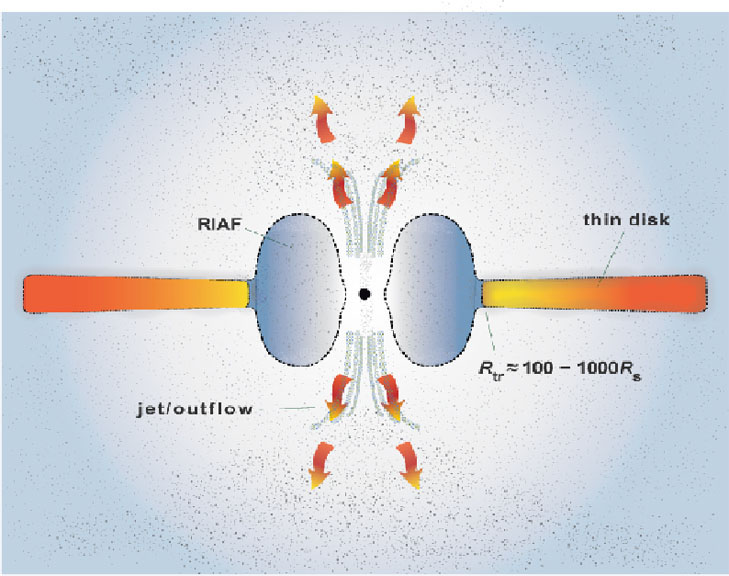 There is also lots of talk about collimation from hot coronae and thick-disks. The idea here (see the picture above) is that if the accretion disk around the central object is hot enough, it gets puffed up into a thick disk---which tends to have a lot of material blowing off of it in all directions. Because of the geometry of the system, outflows along the axes tend to be squeezed together (and maybe even given a helpful push). One feature of this model is that the jet needs to be aligned with the rotational axis of the accretion disk, instead of the rotation of the central object.

Not the answer you're looking for? Browse other questions tagged astrophysics relativistic-jets or ask your own question.

15
Why does each celestial object spin on its own axis?
18
Why are some galaxies flat?
4
models for astrophysical relativistic jets from compact objects
5
Why is the dark matter density profile within the solar radius (and local density) uncertain?
5
Why are the jets of the “light saber” star slightly curved?
3
Question about the Blandford–Znajek process