What are the microscopic details of diffraction?

In a recent question I asked how double-slit diffraction conserves momentum and the answer was that each photon gets a "kick" from the slits. So my question now is, what does that look like at a microscopic detail level?

I have a candidate. The lowest order loop expansion I can come up with looks like so. (Apologies. I don't have a drawing package that does electrons and photons properly. I'd be glad to be pointed at one if it exists.)

So very schematically: The photon must split into two parts, which have to start as charged particles. Otherwise they could not be interacting with the photon. These must go one on each side, otherwise there can't be any interference from the two slits. The slits provide an elastic interaction photon that provides momentum, but no change in energy.

I am presuming that the interaction photon can arise from any point on the slits, and interact with any part of the loop.

Is this what is going on? There ought to be a "well known" experiment that sees that charged loop if it is there. Say by imposing an electric field parallel to the plane of the slits. 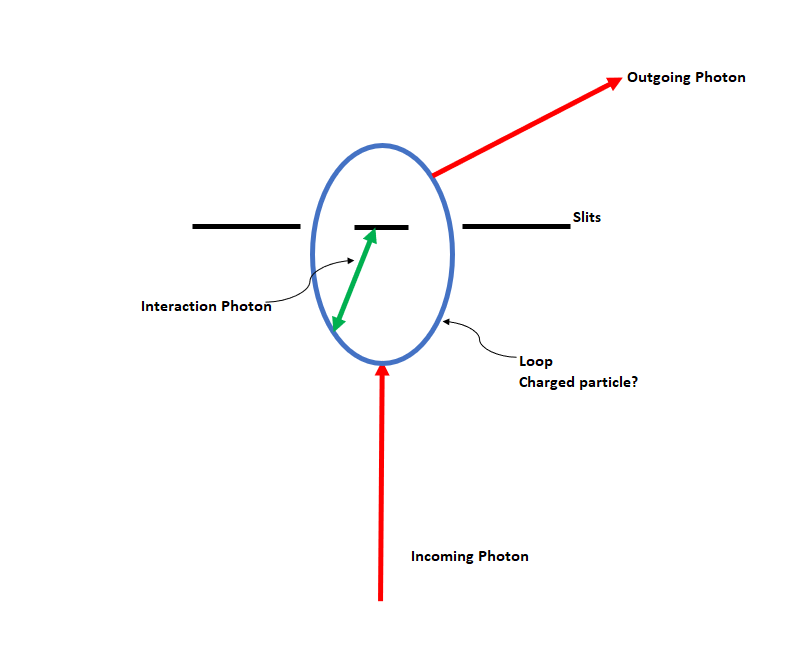 There is no charged loop and no extra photon.

You have to think in terms of waves. Trying to understand quantum mechanics without accepting the notion of duality leads nowhere. One has to accept the weirdness of QM, and to think differently.

You do not state the level of your physics background in your profile, but from your question, I assume that you are not familiar with quantum mechanics.

There is no "charged loop " as you imagine in your drawing.

The material of the slits consists of atoms and molecules, which are neutral. Atoms have charged electrons around them and those are the ones photons will interact with. BUT electrons and photons are point particles, no extension in space that you show for the "charged" particle in your drawing. Their interactions are described mathematically by quantum field theory which gives the solutions in series terms of decreasing in magnitude order. The first order diagrams and calculations for electron photon scattering can be seen here 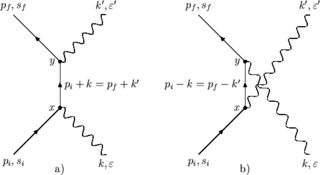 This is for a free electron. It looks a bit like your diagram but it corresponds to mathematical formulas that calculate the probability of scattering in a given direction.

You can see that from momentum conservation the directions change.

When the electron is tied up in the atoms of the slit, it becomes more complicated mathematically , but momentum conservation is a strict rule. The atom on which the electron is bound takes up the momentum and transfers it to the lattice it belongs to.

The classical interference pattern appears after the accumulation of photons.

The photons that don't interact with the screen are the ones that form the pattern. It's the ones that do interact that transfer the momentum to the slit system.

The diffraction pattern is not formed by photons splitting up into pairs of charged particles. Unless the light has a frequency that is high enough to produce electron-positron pairs, the contribution of those virtual loops that are shown in the diagram would be negligible.

To explain the conservation of momentum here, I need to use a bit more technical language. Please bare with me.

To treat the loss correctly, we can model the screen as a beamsplitter that sends the part of the state that is blocked by the screen to a different output port where we can "trace them out." That would give us a mixed state if the original state contained $n>1$ photons (a number state with exactly $n$ photons). In such cases, the interference would be lost.

Not the answer you're looking for? Browse other questions tagged quantum-mechanics optics electromagnetic-radiation photons diffraction or ask your own question.

31
How is momentum conserved in diffraction?
1
Is the double slit experiment performed measuring single photons?

4
Decay of metastable state: spontaneous vs. stimulated emission.
10
How do electrons and photons interact?
0
What is the meaning of the complex valued field in diffraction?
1
What is the specific photon-particle interaction by which momentum is transferred in radiation pressure?
0
What is the complete set of parameters that describes a photon in free 3D space?
3
Schrödinger's Killer App: What are the possible outcomes of the quantum pocket watches?
1
Can we see the interference pattern in the double slit experiment if the walls of the slits are made of transparent glass?
0
What are the properties of the virtual photons that transmit forces in electrostatics?
1
What is the principle behind diffraction?