The secret behind the spinning, asymmetrically weighted, 2D disk-shaped top?

When you spin an asymmetrically weighted, 2D disk-shaped top, the heavy part actually rises to the top. Why is this?

In the second video it shows that this is because of friction but trying this on a frictionless surface won't do much: The disk will go up and down and still the heavy part will be on the top.

I think the solution has more to do with the tennis racket effect (see: https://physics.stackexchange.com/a/17507/392).

Let me clarify the disk with hole in it has two stable axes of rotation and one unstable one. The unstable one is through the hole and the stable one is across (below in green) and normal to the disk. 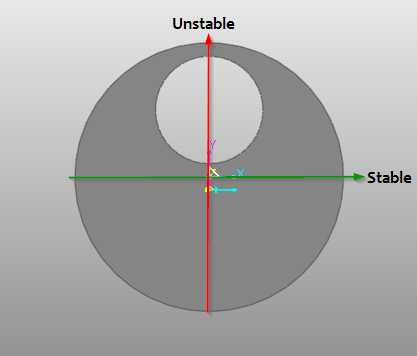 The additional nuiance here is the once it is on the "upsidedown" oriention and friction is present then the unstable axis becomes stable.

where $\ell$ is the thickness of the disk. Since $I_{YY}-I_{XX} = \frac{8}{37} I_{ZZ}$ this means that the y direction is the medium inertia value, x the minimum and z the maximum. Hence the instability about the y axis according to the Tennis Racket Effect.

I am working to qualify the above statement and I am going to update this post with my findings.

I) Here we will give a qualitative rather than quantitative analysis. Consider first the axially symmetric 3D tippe top, which means that there will be two principal axis with maximal moment of inertia. (If we wish, we can for simplicity model the top as a spherically symmetric ball, with a heavy point mass off the geometric center $O$.) Empirically, we observe to a first approximation that:

Now the torques of gravity and the normal force work in unison to increase the precession of $\vec{L}$. The cancellation of this torque can only come from the friction force acting in the same direction (horizontally speaking) as where the center of mass $C$ is.$^1$

Naturally, due to an imperfect rolling motion, the friction force will then tend to slide the point of contact in the direction of the friction force, thereby raising the center of mass $C$. (Del Campo showed that sliding friction must play an essential role in the inversion process, cf. Ref. 1. Of course sliding friction is also responsible for that the top eventually comes to rest and looses its mechanical energy.)

II) The asymmetric 2D discs$^2$ works similarly, although now the rotation will mainly be around the unstable principal axis with intermediate moment of inertia, leading to the tennis racket/Dzhanibekov effect, as correctly pointed out by ja72 in his answer, see also e.g. this Phys.SE post and links therein. In situations without friction, the tennis racket/Dzhanibekov effect explains the last unresolved part of the solution video.

$^1$ Note that the friction torque argument in this Basic Saucer Physics 101 video seems to lead to the opposite effect where the center of mass $C$ gets lowered (rather than raised).

$^2$ The geometric details of the asymmetric 2D discs is to a large extent irrelevant for the effect.

Not the answer you're looking for? Browse other questions tagged newtonian-mechanics angular-momentum friction rotational-dynamics home-experiment or ask your own question.

7
Why does the heaviest point on a spinning ball tend to become the topmost pole?
1
Gyro mechanics with a coin
48
Why does this object periodically turn itself?
14
Intuitive Explanation of Tippe Top Effect?
1
What causes certain spinning tops to flip?
1
A trio of spinning marbles

7
"Artificial gravity" on a rotating space stations
0
Does a spinning part affect the moment of inertia of a composite object?
10
Pulling apart two interleaved phone books
1
Running Euler's disk in a superfluid
2
Why does a top spin so well?
0
An inquiry regarding Euler's disk
2
Explaining why rubbing two surfaces together by hand create convex and concave shapes?
8
We know a human cannot run on water, but could a much stronger and faster animal?