Why can't some light ever reach earth? [duplicate]

Note: I'm a layman in physics. Excuse me if this question is a duplicate, I lack the knowledge in technical terms to find the answer to this by research (I've tried).

Let's suppose there's a star moving faster than the speed of light (relative to earth) due to the expansion of the universe. My understanding is that we'll never be able to detect its existence because the emitted photons will never reach earth.

But the star still emits photons traveling at the speed of light, so shouldn't we be able to eventually detect it? 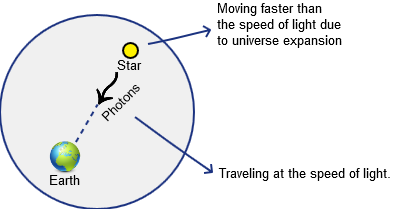 Then suddenly it hits me: If I fire a bullet through the back of a train moving at the same speed as the bullet, it will have a speed of 0 relative to the ground. (I bet this has a name... relativity?)

So, is this the same principle that prevents us from detecting the star, or is something else going on? What direction do the photons travel, relative to the earth?

So the short answer is no, there are cases where we would never be able to detect stars. Their photons will simply be lost traveling in space, never reaching a destination (This is why faster than light travel is necessary if we ever hope to even reach the outskirts of our own galaxy, let alone others).

To go one step further, we know for a fact that as galaxies continue to expand away from one another, we will eventually reach a point where the galaxies we can now easily see, will slowly start dimming and eventually disappearing from the night sky, until the only stars we can see are ones specifically within our galaxy. We also can't know if there are galaxies that this has already occurred with, which is why people generally talk about the universe in terms of our observable universe, since there could be plenty of things out there that we simply cannot see.

The Alcubierre Drive is a speculative faster-than-light engine that relies on expanding and contracting space-time to achieve a faster-than-light traveling speed between objects, even though the space craft would never actually travel faster than light. Similar to how the earth and star could move (relatively speaking) faster than the speed of light away from each other, except this work to close the distance faster than the speed of light.

Another quick example is if a train is moving at nearly the speed of light, and someone starts running forward in the train, the train's on-board time will slow down to ensure the cosmic speed limit is enforced and that the person cannot move faster than the speed of light.

Physics blows my mind. And if I made any mistakes, please correct me! Thanks!

Not the answer you're looking for? Browse other questions tagged visible-light faster-than-light kinematics or ask your own question.

23
What is the theoretical limit for farthest we can see back in time and distance?
7
Is the cosmic horizon related to the Big Bang event?
0
Can we really see new objects in future?

3
Twin Paradox: Why does't the traveling twin measure faster-than-light photons on Earth?
1
What is the limiting factor of the speed of light?
1
Can an observer perceive a single source of light as multiple sources because of curved spacetime?
0
In femtosecond Raskar photography of a light pulse, why is the light pulse not length contracted?