Magnitude of force to keep stick in equilibrium [closed]

A straight and homogenous stick with mass m is pressed against a wall with the force F. The stick is horizontal perpendicular against the wall. Given that the friction between the wall and the stick is μ, determine the horizontal component of F in order for the stick to not fall down. 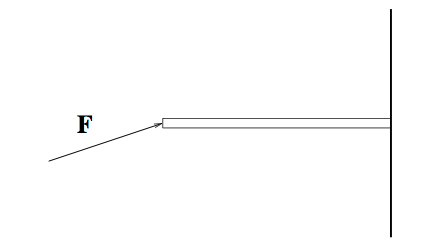 Your mistake is in forgetting that the verictial component of force F holds up half the stick, so the friction force only needs to hold up the other half of the stick's weight, not the whole weight.

Let the length of the stick be L. Consider moments about the left-most end of the stick. With this choice of axis, neither the applied force F nor the normal reaction force from the wall on the stick contribute to the moments.

28
Why doesn't a fly fall off the wall?
2
Pseudo force in rotating frames
2
How do centripetal forces and gravity work for objects in a rotating cylinder?
1
Finding inclined plane acceleration
1
Rigid body equilibrium word problem
0
Can a wall exert a force at an angle? Beam in rotational and static equilibrium problem