What is the formula for the relativistic ellipse?

If an astronomer moves at relativistic speed, the stars and constellations are distorted. He sees the stars towards which he is moving blue shifted, while the ones he's moving away from are red shifted. In addition, the apparent direction of distant stars is modified. I think that the coolest way of representing this is the "relativistic ellipse".

Think of a spherical shell with the inner surface reflective. Imagine a flashbulb going off at the center. The light is reflected and returns to the source.

Now think of the same situation observed from a moving frame of reference. The light is still emitted and returns to the center at the same time, but that point has now moved. Since the speed of light is the same in all frames of reference, the distance traveled by each light ray has to be the same. So the paths of the light rays (and the boundary of the spherical shell) describes an ellipse, the "relativistic ellipse": 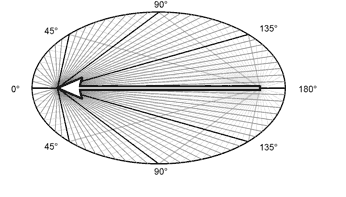 The above drawing is from the book "Relativity in Curved Spacetime" which I highly recommend and can be purchased here or here.

Perhaps when my copy arrives it will have the equation. Should be possible to work it out using Lorentz invariance or contraction or something similar.

Per the answer by Helder Velez, Chapter 4 of Hans de Vries's book has the following useful diagram: 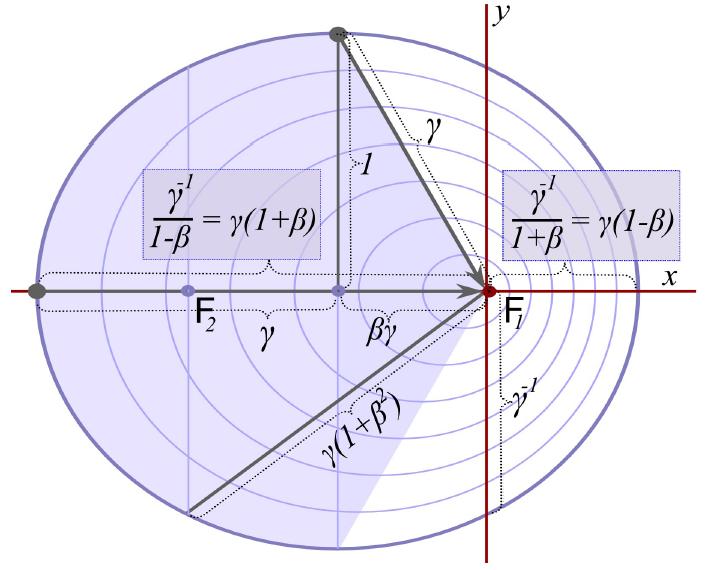 In the former case: it's easy to work out the shape and size of the ellipse by considering Lorentz contraction. Suppose that in the rest frame of the source, the sphere has a radius $r$. Since the Lorentz transform has no effect on components of length perpendicular to the motion, then the transverse radius of the ellipsoid remains the same - but that's just the semiminor axis. In the forward direction of motion, the length of the path taken from the source to the sphere is given by

and from the sphere back to the source,

Adding these up you get $r_1' + r_2' = 2\gamma r$, but this is the total travel distance which is just twice the semimajor axis of the ellipsoid. So we have an ellipsoid with semimajor axis $\gamma r$ and semiminor axis $r$.

(I might have mixed up the signs - I'll have to come back to this and recheck it later.)

17
What is the electric field generated by a spinning magnet?
8
What software programs are used to draw Mechanics, Electricity & Magnetism, Waves, Thermodynamics, Optics & Modern Physics diagrams?