Synchronization of clocks and special relativity

As shown in the diagram, a long rod has ends A and B, a spaceship is at A. A, B and the spaceship all have clocks attached to them. The clocks are then synchronized to time $t_0$, and immediately The spaceship flies with velocity $u$ relative to the rod from A to B. 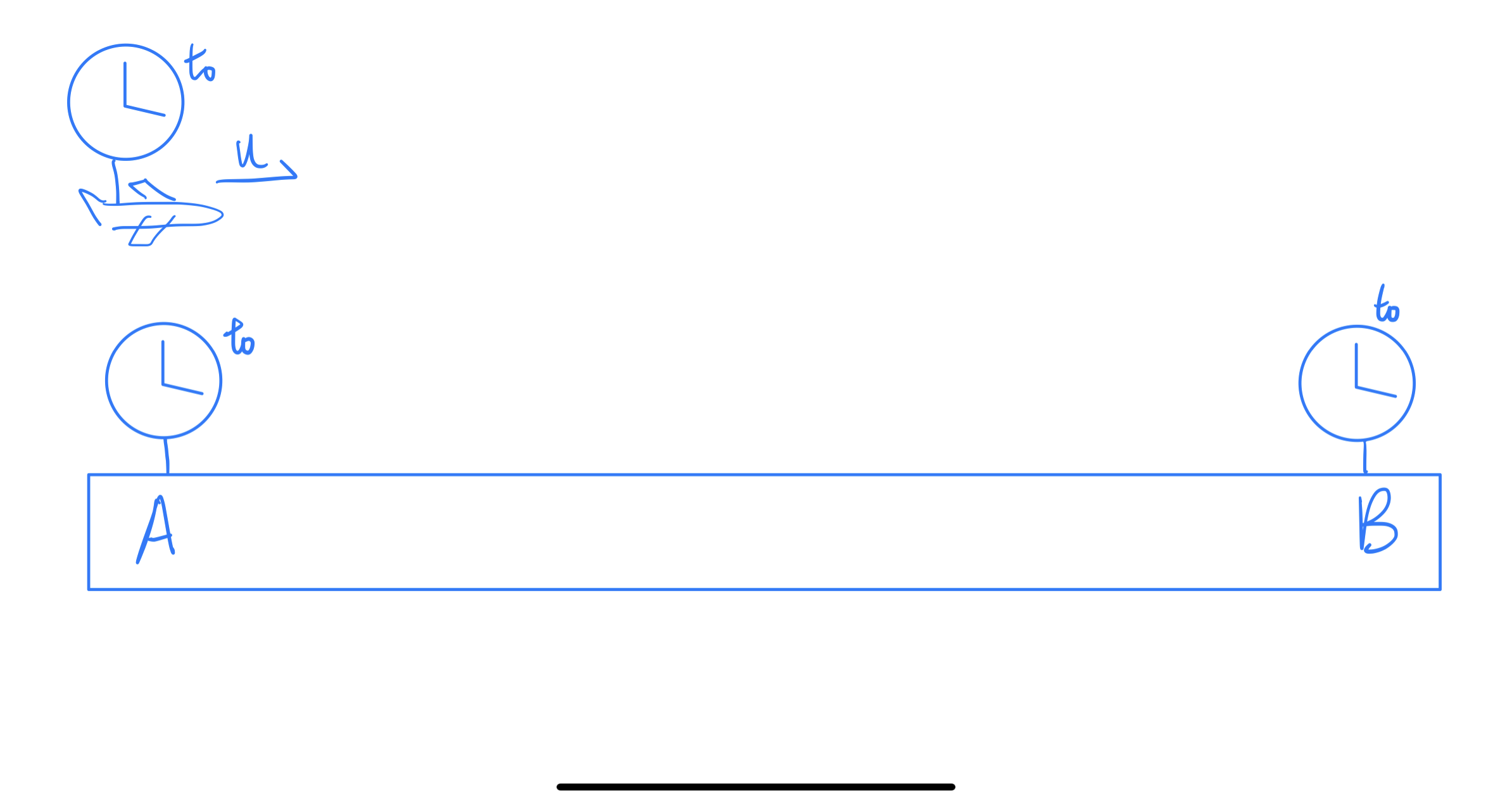 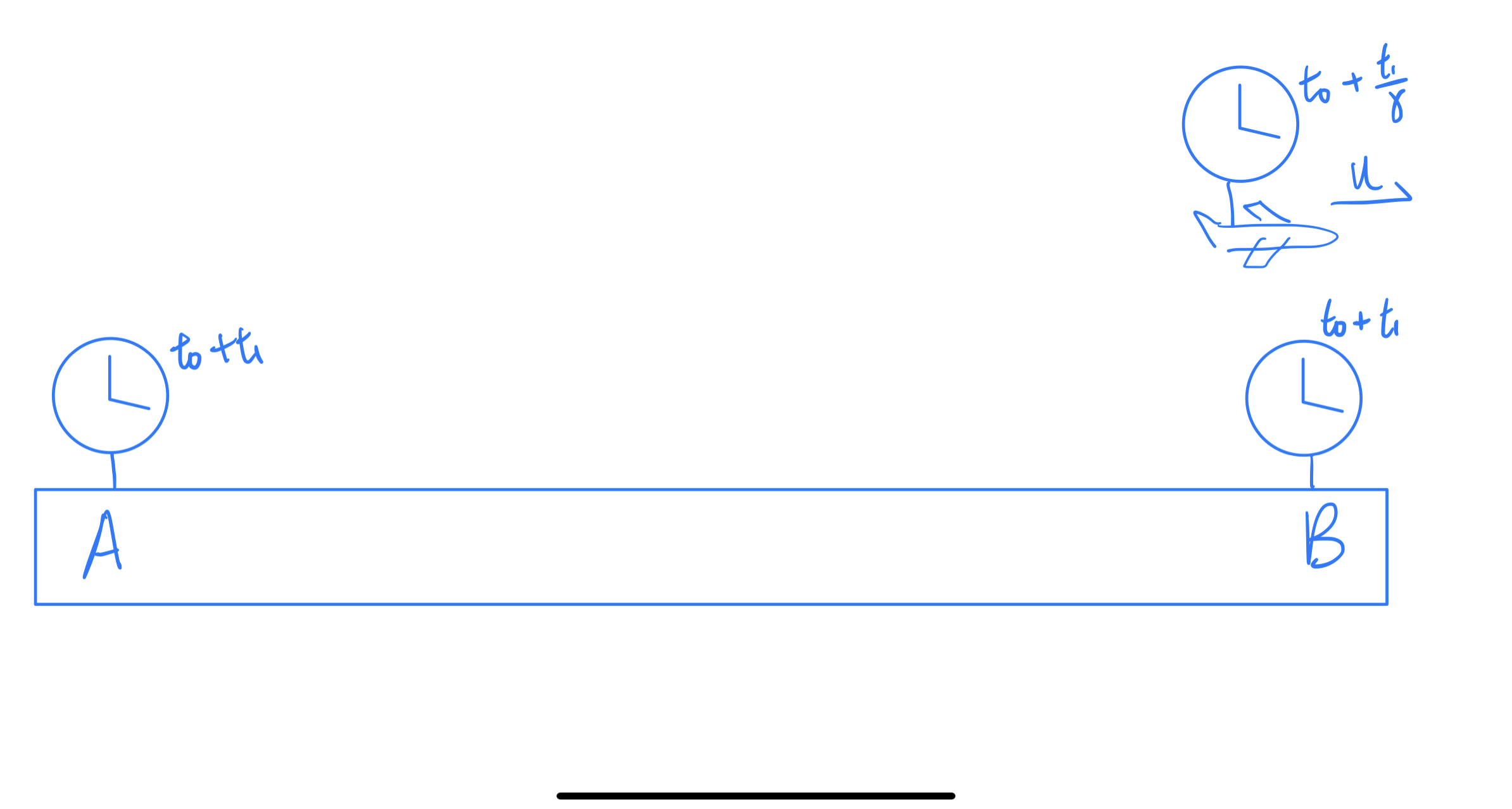 But if we use the spaceship as a reference frame, with the rod moving with velocity $u$ to the left,

This looks very much like the twin paradox, but the twin paradox can be solved by saying that the twin cannot turn around and go back to find the other twin, because turning around would involve acceleration and special relativity cannot be used. How can this paradox I proposed here be solved? thanks！

In the second scenario, an observer on the ship sees the rod length contracted, with apparent length $L' = L/\gamma$. Accordingly, point $B$ reaches the ship when the ship's clock reads $T=L'/u = L/u\gamma$, in agreement with the previous calculation.

With that in mind, the relativist riding on the ship would recognize that when she reaches clock $B$, then it would read

This is a fairly subtle point which deserves some elaboration. A reference frame can be understood as an imaginary lattice of measuring sticks with a clock sitting at each point. Events are labeled by the position $x$ where they occur and a time $t$ as read on the clock which sits at $x$. This is crucial - the time of an event is local.

In principle, the clocks sitting at each grid point have nothing to do with each other. To make a sensible reference frame, we must synchronize them in some way, e.g. via Einstein synchronization. However, we may now imagine that a second observer moving relative to us has their own reference frame. The key insight of special relativity is that if both we and the moving observer sychronize our respective system of clocks, then each will observe the other's clocks to be out of sync.

In keeping with your original question, let the first event at $(0,0)$ be "the ship passes the clock at $A$ when clock $A$ reads 0," while the second event is "clock $B$ reads 0." In my frame (the rest frame at clock $A$), these two events are simultaneous; because clocks $A$ and $B$ read zero at the same time, I say they are synchronized. However, according to the moving observer, the event "clock $B$ reads 0" occurs at $t'=-\gamma vL/c^2\neq 0$, which means that the clock at $B$ is not in sync with the ship's clock in their frame.

Almost always in special relativity when there is a problem it is from forgetting about the relativity of simultaneity.

In this case, in the ship's frame, when the ship passes next to clock A and sets its clock to 0 the clock B is not set to 0. Instead (in natural units) the time in the ship’s frame when B reads 0 is:

Let's suppose the experiment starts at 12 O'clock according to the three clocks, and that the relative speeds are such that when the spaceship reaches the other end of the rod, the clock at B on the rod shows 12:11, while the clock on the spaceship shows 12:10.

You will see, therefore, that the appearance of time dilation is entirely reciprocal, and it arises in this case from the fact that the clock at B on the rod is out of synch with the local spaceship time.

More generally, time dilation arises because the planes of constant time in one reference frame are tilted compared to the planes of constant time in any other moving reference frame. This means that you can only synchronise the clocks between the two frames at a single point- the further you move away from that point, the more the clocks in the two frames become out of synch.

You can generate the effect of time dilation quite simply. Imagine walking at 1m/s down a corridor at which there are people at 10m intervals each holding a clock, and the clocks are set so that each clock down the corridor is 1s ahead of the clock before it. When you pass the first clock it is set at 12:00, as is your watch. After ten seconds you have walked 10m and reached the next clock. On your watch it says 12:00:10, but the clock says 12:00:11, because it is running a second ahead. You walk another 10m and meet the next clock. Now your watch says 12:00:20, while the clock you have just reached says 12:00:22, because it is set a second ahead of the previous one. After walking another 10m you meet another clock which says 12:00:33, while your watch now says 12:00:30.

You will see that your watch seems to be running slow when you compare its reading with the clocks you are passing, but in fact your watch and the clocks are running at exactly the same rate- the appearance of time dilation arises because the clocks are all set out of synch with each other.

Now, suppose that walking along behind you are 10m intervals are people wearing watches that have been set so that each is 1s ahead of the watch before it in the line. Imagine how these walking people with watches are viewed by the first of the stationary people holding clocks. At 12:00:00 you pass with 12:00:00 showing on your watch. Ten seconds later the next walker in line goes past with 12:00:11 showing on their watch. After another ten seconds another walker passes with 12:00:22 on their watch. Ten seconds later another walker goes past with 12:00:33 on their watch, while it is only 12:00:30 on the clock. The appearance of time dilation is thus entirely reciprocal- the stationary person sees that their clock is losing time compared with the watches that are passing, just as you find your watch to be losing time compared with the clocks you are passing. Both groups of people- those walking with the watches and those standing holding the clocks- think that their timepieces are losing time (ie time dilated) compared with the timepieces they are passing, even though all the timepieces are ticking at exactly the same rate. The effect of time dilation arises not because the clocks slow down when they move but because time in one frame is out of synch with time in the other.