Are some protons more massive than others due to spinning at a different rate or being in a more excited state?

The old Usenet Physics FAQ, which is a page originally by Matt Austern, says that

all protons have identical rest masses, and so do all electrons, and so do all neutrons; these masses can be looked up in a table. As the particle is accelerated to ever higher speeds, its relativistic mass increases without limit.

However, writing in 2011 in the “Chemistry” section of PNAS, Hammes-Schiffer says:

This work calls into question the traditional definition of proton transfer as the movement of a hydrogen nucleus between a donor and acceptor atom. According to this perspective, a proton transfer reaction is defined in terms of the change in electronic configuration rather than the movement of the hydrogen nucleus. In this case, a proton transfer reaction is defined as the movement of electronic charge density from the donor–hydrogen covalent bond to the acceptor–hydrogen covalent bond. Such a change in electronic configuration without the motion of the hydrogen nucleus is special to optically induced processes, where the optical excitation is much faster than nuclear motion. The proton is in a highly excited vibrational state immediately after optical excitation and subsequently relaxes to its equilibrium state."

If a proton can be in excited state or not, it can have more mass or not, I would have thought, which would contradict the widely held belief that all protons have the same rest mass.

No. Protons are indistinguishable particles; they all have the same mass, exactly.

We like to tell beginning students that the proton is “made of three quarks,” analogous to the way a hydrogen atom is “made of a proton and an electron.” But that analogy is poor. The quarks in a proton interact via the gluon field (or “by exchanging gluons,” if you like the particle picture). But the gluons also interact with each other, and these interactions produce an “ocean” of virtual quark-antiquark pairs. Also the quarks have electrical charge, which interact via the photon field. The weak interaction is lurking in there as well. The inside of a proton is a hot mess.

But it is exactly the same hot mess, inside of every proton. That’s what indistinguishability means.

If you hit a proton hard enough to store additional energy in the strong-interaction fields, you get a different sort of baryon. Excited baryons which come in two charge states (like the proton and neutron, collectively “the nucleon”) are called $N$ baryons. Excited baryons which come in four charge states are called $\Delta$ baryons. You can think of a $\Delta$ baryon as being “made of” a nucleon bound to a pion —— but like “made of quarks,” that model understates the complexity of the system.

Your second quote is talking about proton exchange between molecules, in the context of hydrogen bonding. The reference to a proton in an “excited vibrational state” refers to the proton vibrating with respect to the recipient molecule.

Compare this language with discussions of the excited states of the hydrogen atom, where people say things like “the electron absorbs a photon and enters an excited state.” This isn’t technically correct, either. In an excited atom, the electron wavefunction is different from a ground-state atom. In the approximation that the nucleus is infinitely more massive than the electron, and in the approximation that there’s only one electron whose state changes, it’s not too wrong to say that the electron’s dynamics have changed and the nuclear dynamics have not. But there is no such thing as an excited electron: all electrons are indistinguishable. For that matter, all ground-state hydrogen atoms are indistinguishable. Indistinguishability plays a key role in quantum mechanics.

Note that an excited molecule is more massive than a ground-state molecule. But not by much.

The word proton is used differently in these two quotes.

Physicists use proton only for the three-quark baryon itself. Chemists sometimes use the term proton as a shorthand for a chemically bonded hydrogen group. That is the excited state to which the second quote refers, not the state of the proton internally. One way to tell is by its mention of "optical excitation," which means electron-bond energy levels.

Exciting a proton internally -- which again is not what the chemistry quote meant -- requires orders of magnitude more energy. As others have noted, the result is so different from a proton that it has its own name, the $\Delta^+$. The $\Delta^+$ is unstable, more massive, and has spin $\frac{3}{2}$ versus the proton's spin $\frac{1}{2}$.

Addendum 2021-12-07.12:16 EST Tue: This is only for folks interested in the in-depth particle physics aspects of this question.

While this is more a matter of opinion in definitions, I would say that the resonance (which means "a short-lived particle") that best qualifies as an excited proton is not $\Delta^+$ but the one-positive-electric-charge $uud$ $N(1680)({\frac{5}{2}}^+)$ resonance. So little emphasis is placed on this resonance that I could not find a standard notation to distinguish between the neutron-like no-electric-charge $udd$ version and the proton-like one-positive-electric $uud$ variants of this resonance. The plus sign at the end of its designation means "even parity," not a positive charge. That accidental pre-emption of the plus sign likely makes adding an electric-charge "$+$" a bit tricky, so perhaps folks just don't bother?

The $uud$ $N(1680)({\frac{5}{2}}^+)$ resonance is more like a proton because two of its three valence (non-virtual) quarks spin in the same direction while the other has reverse spin, just as in a proton. In sharp contrast, all four $\Delta$ baryons (plus their Regge trajectory excitations; if you don't immediately get a page image on that link, try refreshing the page) have valence quark spins in the same direction. The Regge trajectory resonances add spin in units of $+2$ to each of these configurations using orbital momentum. If you think of this added orbital momentum of the quarks as the angular momentum of the quarks swinging around each other at higher speeds, bola style, that's actually a pretty good heuristic model for comprehending what's going on.

You can use that mental model because the strong force behaves remarkably similar to a bungee cord, increasing the force of its binding as it gets stretched. That's why protons and neutrons have well-defined surfaces. It also means that, if someone could measure it (not easy!), the higher Regge excitations should all have larger diameters than protons and neutrons. I have no idea if that has ever been tried.

(On a related note: The critical need for a force with a bungee-cord-like behavior to get string-like vibrations is also why what's now called "string theory" (it was at first called superstring theory) should have died after no more than a handful of papers. String theory unavoidably assumes that some variant of gravity is the binding force, and no variant of gravity shows the bungee-cord-like containment needed to make the hypothesized string vibrations physically meaningful. It's really sad that superstring theory didn't get wrapped up quickly for just that reason, since instead, it went on for half a century, eating up enormous funding and wasting research careers on unproductive speculations that predicted nothing.)

Terminology note: My thanks to user Christoffer for replacing my "canonical quarks" phrase with "valence quarks," a phrase I did not know before. Standard terms are always better!

Protons have no excited states merely by definition. The $uud$ baryon does have higher energy states, but the word "proton" is normally only used for the ground state.

In contrast, excited states of, say, a hydrogen atom are called hydrogen. There isn't any fundamental difference between the two cases. The energy levels of hydrogen are much more closely spaced, and therefore more similar to each other, but that's a difference of degree, not kind.

Are some protons more massive than others due to spinning at a different rate or being in a more excited state?

Protons are composite of three valence quarks and innumerable quark antiquark pairs and gluons qualitatively making a sea. See this 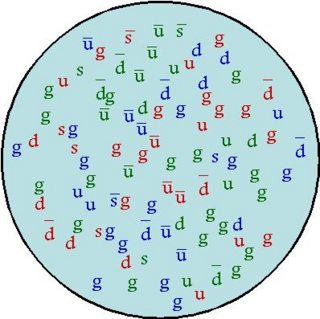 All are bound in a fixed proton mass, the addition of all the fourvectors gives the invariant mass of the proton .In contrast with the atom of hydrogen, which can be in an excited state and thus theoretically have a little bit higher invariant mass, the proton is the ground state with a number of higher energy nucleon resonances being the "excited states".

So the answer to the title is no, there is a unique mass associated with the proton.

Now as far as the quotes, it seems to me they are discussing at a minimum the hydrogen atom, which can be in an excited state, or have extra vibrational and rotational levels when bound in a lattice. I expect that this is only in theory, as the electron volt energies of solid state lattices would not be detectable in the mass of the excited hydrogen atom when treated with special relativity.

6
A proton's weak charge is .0719. Is this dimensionless? A ratio?
2
What is more massive, Proton, standard Hydrogen?
2
What is the structure of the nucleus?

1
Origin of internuclear forces
2
Trying to understand how nucleon number relates to spin of nucleus
1
In fusion inside stars (sun) or very hot gasses, how do the electrons get bound and what about tritons and $D$-$T$ vs $D$-$D$ fusion?
6
What is Binding energy, actually?
0
Predicting the mass of hydrogen
6
A question regarding water and a possible proton-proton chain reaction
0
Why these two hypothetical nuclei have no differ by the asymmetry energy?
5
Are neutrons and protons stable inside atomic nuclei?