Why do two connected 1.5-volt batteries become a 3- volt battery?

If one battery plus side is connect to minus side of another battery, there should be a current flow between them until no free charge move anymore, then the final state of these two side is 0 volt. So, the total voltage of the two connected batteries should be still 1.5 volts.

This is wrong, but I can't think out why.

I apparently cannot post images, so I apologize but you'll have to open this link in a new window to see my atrocious diagrams :) Diagrams -> http://i.imgur.com/Lxfu1e2.png

EDIT: Here are the diagrams, sorry about my lack of artistic skills, haha. 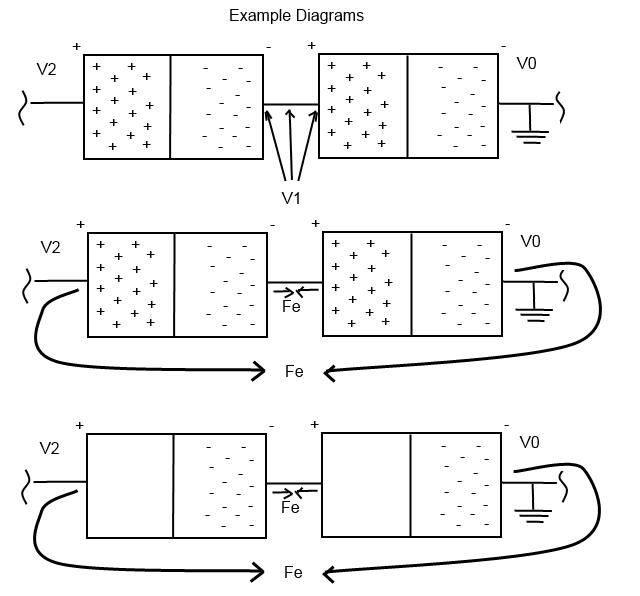 Voltage is an electrical potential difference, which is essentially a force caused by electrons wanting to evenly distribute in a material since the electrons repel each other. Olin Lathrop is using the common analogy between fluid and electric systems, which is why he calls it a "pressure", because pressure is a type of fluid force, but for this example it might be easier to understand if I keep it in electrical terms.

So the batteries try to maintain a voltage (potential difference) of 1.5 V across the terminals. So in the first part of the diagram I threw together, node 'V0' is going to be my reference node which due to the ground symbol means it will be 0 V. So looking at node 'V1' we know that the battery will try to maintain a 1.5 V potential difference, and we know its negative terminal is 0 V, so the positive terminal, or node 'V1', must be 1.5 V. Now, looking at the second battery, the negative terminal is connected to node 'V1', and if the battery is to maintain its 1.5 V difference across terminals, we can add 1.5 V (battery) to the 1.5 V (at node 'V1') to get the voltage at node 'V2', which turns out to be 3 V, as stated in Olin Lathrop's answer.

So why do the voltages add? Batteries are a container of voltage or electrical potential difference, and the potential force is created by a electron rich side separated from an electron deficit side. The electrons want to disperse evenly through the battery, but cannot pass through the middle, and thus must take the long way around to get to the other side. So with two batteries, you can see that there are actually two (basically) equal forces, two sets of 1.5 V difference.

Now to get to the heart of your question, basically why can't the middle two parts simply intermingle at node 'V1'? I'll use 3 different cases to help explain We also need to keep in mind that positive charges aren't really there, so the last diagram is a little more accurate still, where there are simply electrons and a lack of electrons (the electrical potential difference).

Case 1: Assume that the batteries are connected via node 'V1', but not from 'V0' to 'V2'. If we try to imagine moving electrons from the left battery to the right battery via node 'V1', we are actually pushing electrons CLOSER TOGETHER. We know that electrons repel each other so they don't like to do that. If we magically could though, we would be increasing the electrical potential difference, or voltage, in the right battery and decreasing it in the left. (But the total system would maintain the same total voltage, since we did nothing to the system except move electrons around.) So instead of the electrons forcing their way closer to more electrons, they just sit there and do nothing.

Case 2: The outer terminals, nodes 'V0' and 'V2', are connected but the inner two are not connected. If we push electrons from 'V0' through the circuit to node 'V2', we end up in the same situation as case 1, trying to push electrons into more electrons! This is why electrons don't want to flow if there is not a closed loop, because they'll just end up running into electrons that aren't moving somewhere else.

Reality Check: There are some differences with reality though. For example, as batteries are used, they will decrease in voltage. Since the electrons are trying to evenly distribute, the electrical potential difference will decrease as well. Also, the barriers between the electron rich and electron deficit areas of the battery aren't perfect. All batteries have a self-discharge rate, which is effectively the electrons making it from one side of the battery to the other, it's just generally so small in comparison to the amount of electrons that we can actually use, that we ignore it. Internal resistance is also mentioned above, another slight deviation from the theoretical operation of batteries. But you can learn about all that stuff as you feel ready.

I hope this helps, and if I made any mistakes, please let me know! :)

What you are describing is called a series connection. Think of the batteries as pumps, with each pump generating 1.5 PSI. If you connect the outflow of one pump to the inflow of another, then overall the two pumps are going to generate 3.0 PSI.

Note that the current capability is not doubled. If the two pumps are each rated for 1 gallon/minute, then the resulting 3 PSI pump can still only do 1 gallon/minute. Note also that each pump is still doing just what it is rated for, which is 1.5 PSI at 1 gallon/minute in this example.

Batteries work the same way, except that electrical "pressure" is expressed in Volts and electrical flow in Amperes (Coulombs/second). Two 1.5 V 1 A batteries connected in series (end to end) make a overall 3.0 V 1 A battery. If the batteries were connected in parallel (both + ends together and both - ends together), then you'd have a overall battery that can do 1.5 V at 2 A.

Not the answer you're looking for? Browse other questions tagged electricity electric-circuits batteries or ask your own question.

0
Does using batteries in a series raise the overall Wh's of the batteries used? Why/Why Not?
11
Why is there no current flow when I connect two opposite terminals of two separate batteries?
6
Why batteries in serial don't discharge each other?
0
Why can't I series 5 D Cell Batteries to achieve 7.4 volts?
19
Why doesn't the voltage increase when batteries are connected in parallel?
1
Is this a correct way to think about 2 batteries connected in series?