The eigenvalues $E(k)$ in both of these limits are $\pm 1$ for every value of $k$; this is what is plotted on the $(E,k)$ diagrams. However, the critical difference between them is related to how the phase "wraps around" as $k$ varies from $-\pi$ to $\pi$.

This integer $\nu$ can be extracted as follows:

The integrand is the so-called Berry connection.

$^\dagger$As an important note, it is generally not possible to find continuous Bloch functions of this kind. It turns out that the Chern number corresponding to a given band is an indicator of whether we can do this. For a 1D Brillouin zone, however, the Berry curvature (and by extension the Chern number) is trivially zero, and we can always find a continuous Bloch function.

In popular science you often read that the topology is a property of the energy bands. In this case it is obviously not true. Is it true in any case? Or is the topological nontriviality always found in the eigenstates of $H(k)$?

Popular science can't touch the ideas of eigenvalues and phase factors, for the most part. The band structure is the map $k\mapsto H(k)$, and it is this map and its associated ones (the Bloch functions, etc) which possess topological properties which may be trivial or non-trivial. The eigenvalues themselves do not inherently possess these properties.

That being said, there are many situations in which the eigenvalues might suggest underlying topological nontriviality; when e.g. spin-orbit coupling causes band inversion, you get something like this (source): 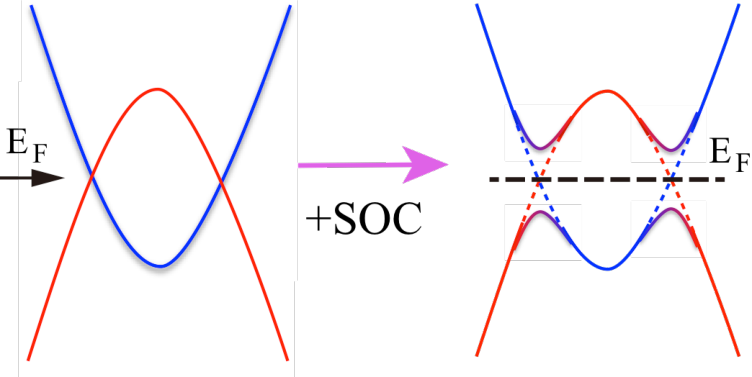 The bulk (solid) curves on the right exhibit a tell-tale sign of band inversion, which is in this case accompanied by non-trivial topology which is manifested in the surface (dashed) energy curves.

So we should be able to see that a system is topologically nontrivial also in the position representation. Is this actually possible?

For a truly infinite system, not really. In the SSH model, clearly the topological nontriviality of the bulk Hamiltonian is determined by the relative magntiudes of the intercell and intracell hopping amplitudes, but that's about it. The real magic of topological materials comes when you consider finite systems with boundaries, at which point the bulk-boundary correspondence associates the topological non-triviality of the bulk Hamiltonian to the existence of special edge states.

In particular, for a finite SSH chain, if the intra-cell hopping $v$ is zero and the intercell hopping $w$ is not, its clear that there will be zero energy states localized to the ends because there is no way for an electron on the first or last site to hop anywhere. The existence of these zero-energy boundary states for a finite chain (which is obvious from the position-space Hamiltonian, in which the edge sites don't appear) is determined by the nontriviality of the momentum-space band structure for an infinite chain. This remains true even when we leave the $v=0$ limit, which is a manifestation of the bulk-boundary correspondence.

Not the answer you're looking for? Browse other questions tagged topological-insulators topological-phase or ask your own question.

19
What does the Chern number physically represent?