What happens to other states of polarized light than $s$ or $p$ when encountering a filter/surface?

I'm trying to understand Brewster's angle and am stuck on what the different types of polarization actually mean (I'm a total beginner in physics so I might have misunderstood some very basic concepts).

My textbook describes light as either $s$- or $p$-polarized or a mixture of both, depending on the orientation of the electric fields towards the plane of incidence. But the non-polarized incident light must also contain other types, that are not either perpendicular or parallel to the plane of incidence? Why do all the diagrams describing Brewster's angle only show two types of polarization then? Example, this diagram from Wikipedia: 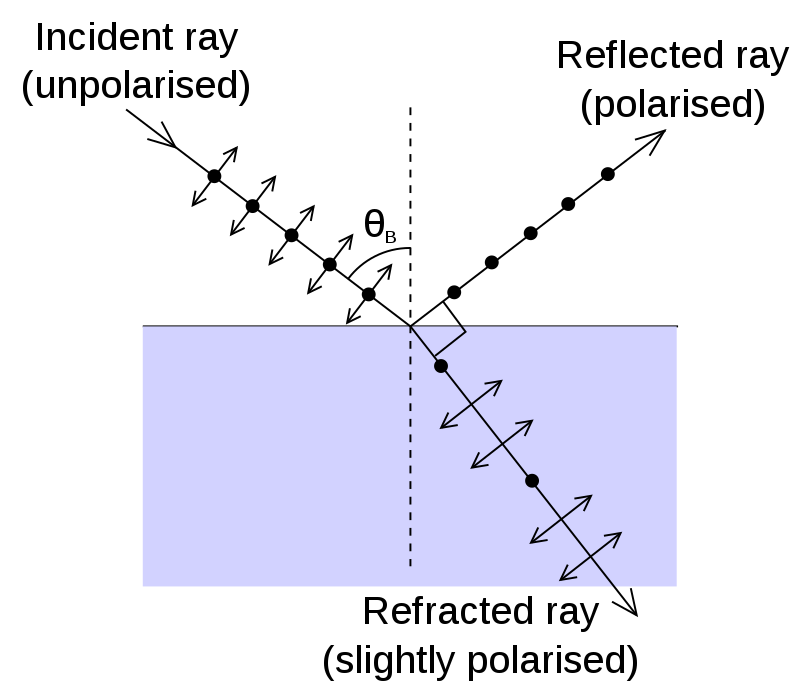 What happens to that other light when interacting with a surface, or passing through a polarizing filter? From my reading so far it seems that there is a mathematical way to reduce these other orientations to combinations of s- or p-polarized light. How does that work? For example, if the electric fields of a light ray are at an angle of 45 degrees from the incident plane, does half of it behave like p- and half like s-polarized light? In the case of Brewster's angle, would that ray be half-transmitted and half-reflected, or only transmitted?

If your light is made up of a combination of s- and p-polarised light, then you treat each of these components separately and then add them back together when considering the reflected and transmitted light.

Not the answer you're looking for? Browse other questions tagged optics visible-light polarization or ask your own question.